Touched By A Song: "Wonderful World" by Chris Eaton 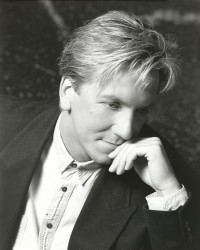 I had moved a mountain of obstacles to get to the interview. Got someone else from church to take my small son to school. Dressed up in clothes which felt more than usually awkward on a hot summer day. Rushed like a mad thing to get to the place on time. Never mind, by next morning I was going to be a wage earner: a respectable member of society with an office to go to and a neat job title.

Who was I kidding? The moment I walked into the interview room, I knew better. The first interviewer asked his first opening, perfunctory question, and it was quite clear that he had not read my application, had no intention of doing so and I was only there to make up the numbers alongside the candidates they were going to take seriously. His damn silly question got an even sillier answer from me; and from there things went from bad to worse. Soon all the interviewers were falling about laughing at the sight of an unemployed person floundering.

Back home, weeping with frustration and humiliation, there was still an hour before I had to go round to School. Time for a cup of tea and a sit down with the -ord. Find the latest Cross Rhythms cassette: volume 10, issue 27. Slot it into the machine. Power on. Headphones on. Time to unwind:

"I have shouldered the blame for too long,
I have hidden my light under a cloud..."

Admittedly I am feeling pretty vulnerable at this point, but I am just gutted by the obvious emotional: commitment of this performer. Chris Eaton. Hmm, never heard of the guy before and this is not normally my style of music. But he's got what it takes, the psalmist's gift of painting a vivid scene with just a few telling details; and he has the confidence as a composer to use a very simple setting which will not get in the way of the words:

"There's a couple embraced on a hill,
There's a child on the sand, skimming the stones.
Over the break of the waves is the burning sky..."

For the first time in my life I realise that God is involved in the nitty-gritty details. He really cares about things like the fact that I didn't get that job. Yes, I know it says plainly in Scripture, "Cast all your anxiety on him because he cares for you." (1 Peter 5:7) I have a degree in theology; I have even introduced the idea to other people. Nevertheless, somehow the idea of God as a loving Father had passed me by. It took a song to short-circuit my defences.

Another gift Chris Eaton has is making the experience at the heart of this sing, universal. The Psalmist does this too. I cannot reconstruct from the lyrics what personal situation lies behind them. It could be illness. Or bereavement. Or a career setback. Or something I have not thought of. It doesn't matter because this way the song can touch anyone in need.

What it taught me in my pain was that God was alongside me. When I loused up that job interview, it hurt Him too. And yes, it was time to stop thinking about how badly the employers' side had behaved (that's between them and the Lord), and start thinking about growing up myself. For instance, next time I'm faced with a panel of interviewers who have already made up their minds to reject me, I shall know it is up to me to prove them wrong.

The combination of music and words in this song lifts a message which could be quite banal up to a level where even the most cynical may have to ask themselves if they will make a commitment to God who longs to give all of us life to the-full:

"For you, and for me,
And for everyone who will believe
There's a hope..."

POSTSCRIPT
I did eventually get a job: administrator of a (secular) music group. The hours were totally flexible. Which is just as well because I had only just started when our son was summarily expelled from school. (He's not yet five!) Then his next school got round to telling us that actually he is Special Needs. And then my new employers got round to telling me that actually they'd rather dispense with my services"!

"Even in the heart of the storm
I am able to stand,
'cos I know Who I am."