Touched By A Song: "(Your Love Has Lifted Me) Higher And Higher" by Jackie Wilson 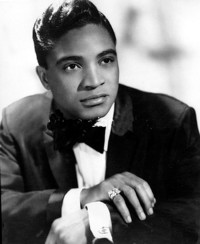 Having been a 'mod' in the mid to late '60s the song by Jackie Wilson called "Higher And Higher" formed a regular part of my social life especially at the school dances and discos which I used to help organise.

About three years ago the song re-emerged in my experience in really remarkable circumstances.

My second parish, following my ordination, was Bloxwich. It is a very large and demanding urban parish on the north side of Walsall in the West Midlands.

A few of us set up and ran an open youth club in the town centre which soon had more than 90 members. A lot of the young people, who came, drifted in from the Bloxwich area and included punks, skinheads, rockers, and a large group of scooter boys, very much in the mould of the 'mods' of my youth.

For three years we worked hard to continue this extremely demanding work and often had problems of violence, drink, and so on.

We had a weekly time when I attempted to get across a Christian message in an epilogue, which was not an easy task! I tried to cover a relevant topic and hoped that something occasionally may have sunk in.

I remember, for example, speaking about the problem of suffering and death when I found out one member's mother was seriously ill.

It was not an easy time but we did get to know a lot the young people very well. One of the leading scooter gang members was a lad called Chris who was never short of a word of humour and always made his presence felt.

In 1985 I took up my present post about three miles down the road from Bloxwich and was soon immersed in the joys and problems of town centre work in Walsall.

Two years into this work I received a phone call from a local district nurse who had encountered an interesting problem. She had called to see a 21-year-old boy who was suffering from terminal cancer and she found him very disturbed and avidly looking through the Bible to find answers.

He lived with his parents in a large local guesthouse, which his mother ran. The nurse was so moved by the plight of this young man that she went to her local vicar, some miles out of town and asked what she should do. He suggested that she gave me a ring to see if I could help.

Through these circumstances I went round to see him and was surprised to find one member of my old youth club in the front room and then young Chris lying in bed looking very ill and disturbed.

He was so relieved to see me and told me of nightmares, which had prevented him sleeping for weeks. The fear of death and hell was very real to him and he needed answers and help.

Our conversation led to a two-hour-long confession of sin and a joyous reception of the Lord Jesus into his life. He found peace and slept for the first time in weeks and his life changed dramatically.