There can be few worship leaders who, when they get to record their debut album, are able to call on figures like Matt Redman, Brenton Brown and Ben Cantelon to write songs with. But then, few worship leaders minister at one of America's most famous churches with a pastor who has written a book which has sold 30 million copies. Travis Ryan is the worship leader at Saddleback Church in San Clemente, California, pastored by Rick Warren, author of the Christian publishing phenomenon The Purpose Driven Life. Now Integrity Music have released Travis' debut album 'Fearless' which is already picking up raves from the critics, one reviewer commenting, "'Fearless' is a top notch album with amazing everything: vocals, lyrics, instrumentals, production and engineering."

Amongst those contributing to the production are Adam Hawkins and Chris Testa (renowned for working with 50 Cent, the Goo Goo Dolls and others). Travis summarised the lyrical focus of the album. "The entire record is a collection of the 'songs of my life,' but it's also something for the church to sing."

Ryan entered into music at an early age, as the middle child of a musical family - his first professional gig was a national Oldsmobile commercial at the age of eight. His home was very much a Christian one and his father was a worship leader and songwriter. Travis too was soon singing and playing guitar. As a teen Travis attended the Saddleback church but then set off to try and land a mainstream record deal. He performed several showcases for Virgin Records executives. But the record breakthrough eluded him and Travis headed back to California for college, so discouraged about music that he didn't even pack a guitar. But when a small congregation near his campus was looking for a worship leader, Travis said, "I stepped through that door and fell in love with the church." And he began to see music in a completely different light. "I began to feel a calling, like every part of my life had been puzzle pieces that were now coming together," he continued. "At that church I began to see the things I am really passionate about."

Immersing himself in life as a worship leader, Travis discovered a new level of enthusiasm for writing songs with the Church in mind. While still in school, he reconnected with Saddleback's Rick Muchow who offered him the chance to lead worship for the church's singles group. Travis accepted the invitation, finished college, married his wife Hayley, and later accepted a full-time position as worship leader at Saddleback. "My heart was burning for the church," he said.

Ryan worked as an associate producer for projects at Marantha! Music. Ryan also led worship for such organisations as Campus Crusade For Christ, Student Venture, The Purpose Driven Life Worship Conference and at several universities. He also began writing songs with worship leaders like Matt Redman, Anthony Skinner, Ben Cantelon and Brenton Brown. Said Travis, "I'm a huge fan of co-writing. That's just how I do it; we're better together. It's such a powerful way to communicate community, bringing together two hearts to write a song." 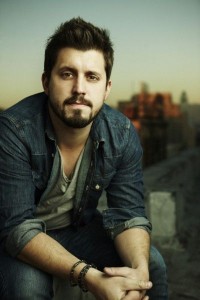 Signing with Integrity Music, Ryan began recording the 'Fearless' album. Based on Redman's recommendation, the title track became a prayer of sorts, a template for facing the evil within and enemies among the world. "Though we walk through darkness our God is our fortress," sings Travis in a steady voice backed by his band's modern edge technique that goes from graceful to growling with ease.

Other standout tracks on 'Fearless' are the early U2-influenced, pop/rocker "Awaken Us", a call to the sleeping Church which was penned while he and Redman were sitting in a beautiful church in Brighton, England that had not been filled in years; the acoustic-orientated "Chase" reminding listeners that wherever we go Christ's love relentlessly chases after us; and "Lord Most High" inspired by the TV coverage of the trapped Chilean miners whose rescue Travis saw as a metaphor of what God does for us. He commented, "You're watching guys pulled up from the earth, out of darkness, and people are shouting out their joy like an army. It reminded me of how God has rescued and redeemed us."

Possibly the most personal song on 'Fearless' is "Asking", a song that touches on everything from the steadfastness of his earthly dad to the endless wonder of our Heavenly Father. Ryan, today the father of two young sons, made a final comment about 'Fearless'. "If I died, these are the songs I would want my children to point to and say: 'That was my dad; my dad believed that.' This whole thing is an altar to God."