Tre Luci: A trio of choristers adding a new dimension to contemporary worship

When Lincoln's Tre Luci played Spring Harvest recently they stunned the SH audience. Here was a group singing modern worship songs but singing them in the style normally associated with the rarefied atmosphere of the cathedral or the classical music concert hall. For Tre Luci sing the songs of Stuart Townend, Graham Kendrick and Martin Smith in the pure, ethereal tones of experienced choristers. I journeyed to Lincoln's dB Studios to meet up with the group - Bryony Jones, Naomi Line and Rachel Line - to find out how these three attractive young ladies found themselves recording and ministering. They have all been choristers at Lincoln cathedral. Explained Bryony, "We all joined in 1995 as three of the first 10 girl choristers at Lincoln Cathedral. I did five years but Naomi has done six and Rachel seven. I finished for my GCSE years."

Naomi explained what it takes to get into a cathedral choir. "I was lucky enough to audition when I was seven. You go through an audition process with the organist of the cathedral, which is quite daunting. And obviously, after your audition you get told if you are going to be accepted or not, if your vocal quality is what they're looking for. And then, when the school term begins, you start in the choir. The rehearsals are quite intense when you begin because you have an hour before school every morning and then you have about two evensongs a week and lots of commitment at the weekend with services and rehearsals and extra concerts, things like that."

Bryony added her bit, "You don't get a break really. Obviously, when it's the school holidays you don't have to go to choir but you have to sing on Christmas Day, Easter Day. So when everyone else is on holiday you have to come in. There's a whole range of music but it is High Church music. You sing 'Magnificat', 'Nunc Dimitus', responses. There's all sorts of hymns and other things like that."

Added Naomi, "In every service the high point for me was definitely the anthem which comes towards the end of every evensong - it's the classical piece that's enjoyable to sing. Sometimes we didn't have any time apart from the rehearsal on the day to practise what we were singing in the service. So there was a lot of sight reading involved and it was definitely a bit of a challenge."

I asked the girls whether all the choristers were Christians. Responded Rachel, "I don't think that's a prerequisite to be honest. A lot of the girls who were the same age as me went through confirmation at the same time as me. If their parents aren't Christians, because of the environment that they're in, it just gives them lots of reflective time to make up their own minds from quite a young age, which is really great. For me personally I'd grown up in a Christian environment at home so I was blessed. Because the cathedral is so amazing, it's so great in the way that the services are not like a normal parish church, you get sort of blown away by it."

Naomi tried to express the whole cathedral experience. "It's a feeling of splendour, of amazement. I was confirmed when I was about 12 I think and that was definitely due to my experience in the cathedral. I went to confirmation classes that were held there, along with other girls in the choir who were the same age as me. And that was the point when I started going to Christian summer camps, singing and starting to learn worship songs which for me was just a little more comfortable and personal than the religious experience I'd been having in the cathedral, although I was grateful for that." 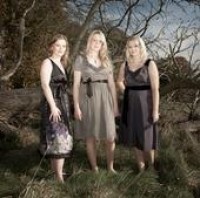 Bryony explained how the group that was to become Tre Luci gradually evolved. "We were given a lot of experience through school. Because they had a lot of choristers in the school they would actually use the choristers for bits and pieces. So we've actually done a lot of trios, quartets with us three and with other people involved. We were always making music, not just as a choir but as a trio or quartet. We felt it was a natural progression both from the Christian side and the music making side to get together and really do something with what we've got."

Naomi commented, "We first came together as a trio when we became involved with the Lincoln Music Festival. We formed a trio and the first song that we sang was 'The Lord Is My Shepherd". We entered a class and were the only trio that entered so we were awarded first place which we were very proud of. From that moment onwards we were asked to sing at a few weddings."

It was one of those God-incidences that Lincoln not only sported an outstanding cathedral choir but also a firmly established Christian recording studio. dB Studios, run by Dan Bowater, had down the years recorded a shoal of albums. In 1999 they were approached by the Girls Choir of Lincoln Cathedral, directed by Linda Hepburn-Booth, to record an album. A little time after that, renowned worship leader Chris Bowater asked the choir to do a session for his 'Heritage & Hope' album. When Bryony, Rachel and Naomi ventured forth as a trio, they decided to approach dB Studios to record a demo. Remembered Rachel, "We said we'd like to come in for a day and record a few songs, as many as we could fit in, just as a demo to send off to see if anybody wanted to work with us. But it was then that dB said don't send it off, we've got a proposition for you. It went from there."

It was the inspired idea of getting the girls singing contemporary worship songs rather than the standard high church repertoire which gave Tre Luci their unique direction. Explained Bryony, "We actually decided to compile a bit of a list of people's favourite worship songs and see what we could do classically to the ones that were on the list that would still keep the essence of the worship song but change it, give it that twist of classicalness. So that's how we really came upon the songs that we came upon for the 'Tre Luci' album."

Added Naomi, "We were already fans of a lot of worship music. We really like Matt Redman, Tim Hughes, Delirious?, people like that. So some of the melodies we already knew and liked. But there were a few songs on the CD that were given to us, that we had to listen to at home. We listened to them a couple of times and we had to think seriously about which ones we could actually sing as a trio and not just the ones that we liked and enjoyed singing. That was quite difficult. We had to be told no this isn't going to suit you but I know you like it. The ones that we didn't know it was quite easy to just listen through the melodies a few times, sing them along together, go through a few melodies and harmonies to see what worked and what didn't. And as soon as we were singing together and working with the producer Howard Williams we knew what was going to work and what wasn't. And that was how it all came about."

Tre Luci thoroughly enjoyed the recording process. Said Bryony, "Working with Howard was incredible fun. We would get into the vocal booth - it was completely different from the demo that we did because we were all in one room together singing into microphones. If we did something wrong then we'd have to stop and start again whereas this was we all went individually into the booth and sung along to the track. By the end of it we really had it nailed. We would go in, do three or four takes of the same thing but it would be us singing from the start to the finish and because we wanted to get that one take, we wanted people to know we could sing songs in one take. I think, hopefully, that comes through on the album."

Now that dB Studios have released the album, available through their bridgemusicstore etail arm, Tre Luci have begun to minister at Christian events like Spring Harvest. Said Rachel about Britain's most popular Bible week, "We really enjoyed Spring Harvest's atmosphere and the different sorts of music that's all around. We went to the big top and before we did our own performance the worship songs that they were singing were sort of gospel style and we really enjoyed that." Added Naomi, "I think because we're a different sound to the normal worship singing maybe people can find from our performance something a little bit different. I think people find us quite peaceful. We like to sing some of our things unaccompanied and at the end of our set at Spring Harvest we sang a blessing which was unaccompanied and the reaction was that people were so grateful that they'd had such a sense of peace bestowed on them before bedtime. A lot of people couldn't actually put it into words, how peaceful that it had made them feel. We're delighted that we can give that kind of thing to people through our singing."

Intriguingly, not only are Tre Luci beginning to take the sublime sounds of classical/choral vocals to an evangelical Christian audience they are also planning to take the songs of Redman, Delirious?, et al to cathedral congregations when Tre Luci undertake a tour of cathedrals. One thing is certain, this talented trio of choristers have the determination to impact an extremely broad sweep of church goers.