Their self-titled debut album was a huge gospel hit while their follow-up seems likely to take New Orleans' TRIN-I-TEE 5:7 to even greater success. Tony Cummings reports. 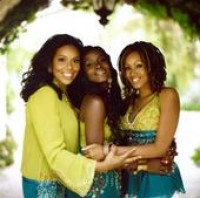 Of all the dozens of gospel acts now selling huge quantities, few have made a more meteoric rise than Trin-i-tee 5:7. Their debut album Trin-i-tee 5:7' seemed to emerge from nowhere in 1997 to clock up breathtaking sales (390,000 units and counting) while their brand new release 'Spiritual Love' is unquestionably going to outsell that. With the marketing nounce of B-Rite Records behind them (the company that took an unknown youth choir and turned them into the sales phenomenon that is God's Property), and an awesome vocal armoury Trin-i-tee 5:7 have the potential to equal the platinum sales of the TLCs and Destiny's Childs. There will be none of the sad descent into bedroom soul we've seen for other soul sistas with church backgrounds. "There's so much pressure out there for young people," says Taylor, "so much sex on TV, radio and movies that they think it's normal to be intimate at 16. We want to get the message out that they have a choice. The physical stuff can wait." "We can be stylish, hip and saved," says the group's Chanelle Haynes, whose smokey contralto has been compared by critics to Toni Braxton and Anita Baker. "We want to be what we didn't have when we were younger. We didn't see women in gospel that got our attention, that looked like us, that were young and fashionable."

The name Trin-i-tee 5:7 is taken from 1 John 5:7 which speaks of three becoming one to bear witness of Christ. These three became one when New Orleans based entrepreneur Kenneth Grant sought to create a cool, exciting, all female group that has secular appeal but is sold out to the Lord. While at his church, Greater St Stephens Full Gospel Baptist Church, he was blown away by a solo sung by Chanelle. Later, while eating at a fast food restaurant he "coincidentally" ran into Angel Taylor (a sista whose soulful soprano one critic has compared to R&B superstar Brandy), an old high school friend she has competed against in several contests. Angel was asked to join Chanelle and Kenneth completed the threesome with Terri Brown, a soloist in his church's Young Adult Choir. Trin-i-tee 5:7 was born!

When top record executives Vicki and Claude Lataillade came to New Orleans, Trin-i-tee 5:7 auditioned for them in Chanelle's den. As they sang "Father", one of the songs they wrote, Chanelle knew in her heart they would be signed. This was confirmed, only a couple of days later, when Claude called and offered a contract to his label, B-Rite.

With the release of 'Trin-i-tee 5:7' the trio exploded onto the gospel scene: a debut that soared to the top of the gospel charts, multi-format radio and video success, prestigious industry awards, ongoing international media coverage and a featured spot on one of the year's most popular concert tours with Kirk Franklin. On the airwaves, their R Kelly-produced debut single, "God's Grace", reached the Top 10 on R&R's Urban AC chart, while the accompanying video found wide acceptance on MTV, The Box and BET.

With all this dizzying success, the group underwent a personnel change. Terri Brown opted to become a stay-at-home mum and her replacement was Adrian Anderson. It was friendship that brought her to the group. In Adrian's role as a successful makeup artist, she had worked with the trio and their labelmates for two years. "It never crossed my mind to mention the fact that I'd been in 'girl groups' before," she said. "I was quite thankful for my career. I always cared about my artists and was thankful that God allowed me to touch them last and pray for them before they went out; I grew so much spiritually being a part of the B-Rite Music family."

As the friendship with the trio deepened, Anderson's hidden talent (and her considerable musical experience) eventually came out of hiding. "I was discreet and professional, so I didn't hum or sing while I was doing their makeup. But we became great friends and one day at my apartment we were having pie and ice cream and they asked me to sing... I thought they were just kidding." They weren't. According to Angel Taylor, Anderson was the perfect fit. "One day it dawned on Chanelle and me at the same time, and we mentioned it to her. She wouldn't give us an answer until she prayed about it."

"I knew I'd have to be ready for a lot of hard work," said Anderson. "And I wanted to make sure I would be able to make a real contribution. I knew people respected them, and the songs really ministered to me." As soon as Anderson said yes, the trio was off and running to concert dates, meeting with producers and recording their new album, 'Spiritual Love'.

For their highly anticipated second release on B-Rite Music, the trio co-wrote four songs with their producers. "We've written songs before, but didn't record them," said Taylor. "Getting to sing our own songs was a real thrill... they are dear to our hearts." To match the trio's sizzling vocal talent and ever-growing musical maturity, a cadre of top flight producers was secured for 'Spiritual Love': Armando Colon, Fred Jerkins III, Joe Wilson and Gerald Isaac. Other all star contributors included guest vocalists Kirk Franklin ("Gonna Get Myself Together"), Tramaine Hawkins (on the Walter Hawkins classic, "Highway") and Crystal Lewis ("I Promise You"), along with vocal arranger extraordinaire and SOP Chorale founder Natalie Wilson.

Working with so many heroes has been a treat for the women of Trin-i-tee 5:7. "Kirk's like a big brother to us. It's always a joy to work with him," says Anderson. For Angel Taylor, meeting gospel legend Tramaine Hawkins was a moment to remember. "We spent a couple of hours with her in the studio, just talking," she says. "That was a real thrill for me because she was such a big influence. I found out I could sing when I was five, trying to duplicate what she did on her album." Chanelle Haynes appreciates Hawkins' willingness to share hard won wisdom with the trio. "She told us all about the criticism she received at first, for wearing makeup and nail polish. There were so many things that we could relate to... and she was so kind and encouraging."

On tour, working with Kirk Franklin and CeCe Winans gave Trin-i-tee 5:7 more than a superb musical experience. "It was a lot of fun. We learned so much - how to pace ourselves, when to get rest - we learned about ministry from Kirk, who is so high-energy as he brings forth the word," says Taylor. "We watched CeCe every night. We studied her. The way she ushered in the Spirit was really different from Kirk. She's soft spoken, very peaceful and a sweet lady."

Under the spiritual and professional influence of such talented and committed artists, the women of Trin-i-tee 5:7 have nurtured their own particular gifts and honed their vision for reaching out to a wide-ranging audience with the gospel of grace. Unlike other youth-oriented groups that share the urban airwaves with them, Trin-i-tee 5:7 have an uncompromising message of sexual purity and personal faith that goes against the grain of popular culture. In "My Body", a young woman makes a self-assured choice and refuses to be manipulated: "If this is love then you can take it/If this is not then don't ya fake it/My body is the Lord's temple/Don't mess with God's property."