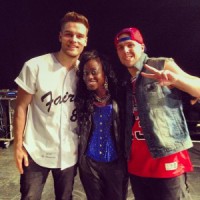 The news that Manchester's Twelve24 will no longer be performing under that name came as a shock for Cross Rhythms listeners. The group have had many of their songs played on Cross Rhythms Radio, including their 2003 single "Real Love", "The Sex Song (I'm Just Saying)" from their 2011 EP 'Better Words', "Freeze The Moment" from their 2013 album 'Tell The Truth', "Tell The Truth Remix" (2014) and from their 2015 album 'From The Ground Up', "I Found You", and have become well known musical evangelists in Britain. So last year's announcement that singer Christina Otoo-Anakwa was leaving The Message Trust-supported band and that Manchester's Josh Green and USA-born Ryan Griggs were continuing on as a duo called Social Beingz came as the proverbial thunderbolt.

10 years ago, Cross Rhythms interviewed Twelve24 and asked them where their unique name came from. Josh responded that it was taken from John 12:24 which says "I tell you the truth, unless a kernel of wheat falls to the ground and dies, it remains only a single seed. But if it dies, it produces many seeds." They stated that the band The Tribe was promised this by God when they concluded their time together. Fittingly, Twelve24 was inspired by this message as when The Tribe ended, they saw this ending similar to the seed dying. This then led to the seed producing many seeds, or in this instance, many other bands including Twelve24. Acting upon this message, when The Tribe went their separate ways, they set up an evangelical training programme called Genetik which is where all three members of Twelve24 originated.

Today, Ryan and Josh take this message in a new light. Whilst initially attempting to carry on with the same band name, they both "increasingly felt like Twelve24 wasn't the same without [Christina]." They noted that "it almost seems fitting that in order for Twelve24 to really grow and go to the next level (which we really want), according to that Bible verse, we have to, in some sense, finish for new things to grow. So this is it. The closing of one chapter for another one to begin." A bittersweet ending for the band came during their last performance as a three person group at Christina's wedding. Despite being an upsetting moment for the group, they "felt as if that performance completed 10 years of school's ministry, brother and sisterhood, crazy long drives having super deep conversations, awesome gigs with awesome friends, family and fans, and ultimately [they] felt as if it completed Twelve24 itself in a joyful moment of celebrations." Although separating from their close friend and lead vocalist, Ryan and Josh continued to work together.

Whilst still carrying the same heart and mission that was at the core of Twelve24, they have morphed into a new band - Social Beingz. Stated the duo, "Our sound will undoubtedly have some of the same elements that you have become accustomed to over the past 10 years, but it will at the same time start taking on a new direction as we write music for just the two of us to perform." But this does not mean that their new path is completely distanced from Twelve24. Currently having over 230,000 YouTube views on Twelve24's hit song "Higher" (ftg Deronda K Lewis), Social Beingz are aware of the pull and attraction to their old music. For this reason then, "for the future, it's Social Beingz, fka Twelve24, same vision, same mission, same passion, some of the same people but a whole new band" linking together their past and their future.

Social Beingz have made a bright start. They have already released three singles, "All Cried Out (ftg Tessa E) issued in July 2018; "Memories" (October 2018); and "Push My Love (To The Limit)" (January 2019)". Given their previous success and their present ambition to spread their message to an even wider audience, there is a lot to be hoped for from Social Beingz.

The opinions expressed in this article are not necessarily those held by Cross Rhythms. Any expressed views were accurate at the time of publishing but may or may not reflect the views of the individuals concerned at a later date.
About Rhiannon Graham

Rhiannon Graham is a recent graduate from Keele University with a degree in English, from London.

For more on Twelve24 visit the Twelve24 artist profile