Twila Paris: The CCM star with a hit crossover album

TWILA PARIS has recorded an album that is hitting both rock, pop and easy listening audiences. Jan Willem Vink reports. 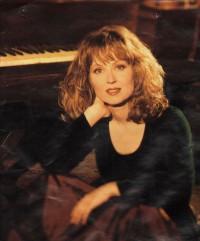 Twila Paris' life can only be described in terms of calling, commitment and faithfulness. For this woman is more than another Christian pop singer. Her most recent album, 'Beyond A Dream', lacks none of the determination and vision Twila carried when she started singing as a teenager. Yet, 'Beyond A Dream' is more contemporary than anything she has recorded before in her 14-album catalogue, and her angelic voice and beautifully crafted songs of faith are now reaching more people than ever before.

When I ask Twila how she looks back on starting so young, she answers: "It's only relative when you look at Amy Grant. She started when she was 14 or 15. I was a late bloomer compared to her. But it's funny, now it seems very young to me. At the time it didn't. I had been writing songs for about three years and those three years, between when I started writing and when I was given an opportunity to record and share the songs with other people; at that age in my life it seemed like quite a long time. I had even gone through a whole time of thinking, well I guess God doesn't want to use me in this way and I need to lay this down and be willing to serve him in another way. Then he resurrected this vision. Now, looking back, almost 15 years later, I think I was such a baby. I look at other people that age and I definitely think they're babies. My little sisters now, they're 27 and 23 and I think they are so young! When I was 27 and 23 I didn't think I was young. It's only bearing a lot in common."

Twila is the eldest child of a family with four children. Her father, Oren Paris, is director of a YWAM base in Arkansas, USA. Her uncle, Loren Cunningham, founded the organisation. As Twila recounts in the song "Seventy Years Ago", from 'Beyond A Dream', Twila's family history is replete with commitment to ministry. Her great grandparents travelled throughout the countryside of Arkansas and Oklahoma as itinerant preachers, holding outdoor revival meetings and planting churches. As a young girl, Twila's grandmother wrote songs that were printed and distributed for use at evangelistic meetings. Not unlike Oren Paris, who is a musician and songwriter himself and not unlike her granddaughter, Twila, who has written a couple of songs that can be found in millions of songbooks and hymnals ("We Will Glorify", "Lamb Of God" and "Faithful Men").

You could say Twila was predestined to become involved in ministry through music. "It would seem that way," agrees Twila. "People all the way back to my great grandfather have been ministers. When we have a family reunion, it's like a church convention with all these preachers getting together, which is really wonderful. I do think in a family there can be a heritage and actually a calling, not just on an individual but on a family. Each generation doesn't have to re-invent the wheel. But certain things are passed down. Certain things are learnt, mostly by being in the household, that does prepare you for ministry. But it is something that is very individual and you have to meet that moment in your own life, where you personally answer the call of God, not just to minister but to know God in the first place. So it's both."

As I mentioned before, ever since the beginning Twila has a strong sense of calling. On the cover of her new album Twila's mission statement is printed. She says: "I believe I am specifically called to emphasize worship, both by writing songs for the Church and by leading in worship; to offer hope and encouragement to those who are suffering or weary; to challenge God's people to greater commitment to him and to one another as his body; to chronicle a growing Christian life with its victories and failures and to be willing to serve as a demonstration of God's love, faithfulness, and ability to work in and through the weakest of vessels."

According to Twila her calling has changed and expanded over the years. "Some of these things I have become gradually aware of. In 1982, when I first started singing, my father, who is a minister, challenged me to go and pray and ask the Lord to give me a direction and to let me know, what specifically I was supposed to be doing, what was my message. So I did that and I felt at that time that praise and worship and commitment were the two things I should concentrate on. And now it's 12 years later, and I've grown as a Christian and hopefully as a minister of the gospel and as an artist. Other dimensions have been added and some of that is because of the things God has allowed me to walk through. Although what qualified 12 years ago to minister encouragement and compassion to people who might be going through a difficult time? Now, because of some of the difficult things that I've been through I feel that God has added a depth of compassion in my life. I'm less quick to judge others than I would have been 12 or 14 years ago, when I was very young and first started out. So some of these things do get added and I believe the Lord brings new vision and new dimensions into our lives as we grow. It has been a gradual adding to the core of that original message that I felt God called me to give."

I ask Twila how she can remain a servant in the light of the overwhelming success of 'Beyond A Dream'. "I think that my job is to get up, bring my day and life to working in service and working in the spirit of God that day. I'm not perfect by any means, that means I make mistakes and make wrong choices as I go through the day. But there are a lot of moments I just get up and I pray: 'Lord, help me today, in my attitude, as I go through whatever comes up with the people I'm working with, to be a reflection of you and to always keep in focus who I am before you, apart from all these peripheral things. And do what I'm really called to do.' I'm not called to be a star. I'm proud to minister and I'm called to pass along the messages that God has chosen to place in my heart. Of course in an overall perspective the message of the gospel of Jesus Christ.

"Each one of us as his children have specific things that he calls us to emphasise. Really, I'm like everyone else. It might be tough at some times. Possibly at some times it might be harder. I don't know 'cause I've never lived another life, I've only lived this one. I don't know if my choices are more difficult, perhaps easier.

"Because of what I do, I am reminded all day of what my calling is. It might be easier to forget for some people if they are a lawyer or a doctor or something like that. Because every time I sing, the words that come out of my mind, I have to hear them too. Whatever we do, I think we're really called to be obedient, one day at a time, one step at a time."

Expanding on the element of chronicling a growing Christian life, Twila points out she isn't as serious as might come across in her lyrics. "I think it is accurate to say that that is one side of who I am. One thing I do feel is very important is we need to maintain a level of honesty. That's why I write songs like 'Do I Trust You' back in 1983 and other songs that are more confessional that put light on the struggle. I'm very passionate and serious about what I do and yet at the same time I'm a normal person. People always see that serious side of me, especially if they haven't seen me in concert or read an interview. They always see the songs. These are things I'm called to write about in my songs, so you see the serious side. You know, I can laugh and be silly. My sisters were both in town last night and we were just being silly. Like girls alone when they get together sometimes. Sitting around joking and laughing.

"My dad says, what I think is true, that the people who are the most serious also will tend to have a very great sense of humour. They love to laugh. I found that a balancing thing, the more serious you are, the more silly you can be at times, perhaps it's a relief like that. I was brought up in a family with a lot of fun, with a lot of teasing, it's a big family, there's a lot of joy and freedom to be yourself." Twila laughs as she continues, "But I suspect people sometimes envision me sitting on a hill with my hands in the air all the time."

'Beyond A Dream' is Twila's most contemporary album to date. "This album is very current," agrees Twila. "It talks about how to face what's going on in the world, not from the point of me being some sort of an authority, but from the struggles that I'm going through and writing as I go through them. It was also the biggest stretch for me so far, artistically. Brown (Bannister) and Paul (Mills) had me singing like I've never sung before."

Over all, 'Beyond A Dream' has a very upbeat and encouraging tone. According to Twila, there were two reasons for that. "One is that I don't usually go into making an album by saying that I want the album to sound a certain way. I just write the songs that are in my heart, songs that I believe are the right songs. Each song is a gift from God. I write the songs that God gives me and then we look at the songs and how they should be produced. I think that a song usually is asking to be produced in one way or another. If you really listen to the song there's not just one way to do it but there's certainly an area in which you should be working for a given song.