U2 Live At Twickenham Stadium 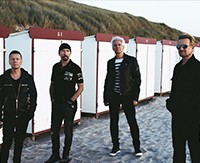 March 1987 was a key time in the life of U2, not least because they released their landmark album, 'The Joshua Tree'. March 1987 was also a key time for me as I heard the second track, "I Still Haven't Found What I'm Looking For", on the second day of release and the lyrics intrigued me sufficiently to send me towards an unconscious yearning which culminated in a profound, spiritual experience nearly a year later.

So I approached this particular U2 gig with a different expectation compared to the previous eight shows I've attended. As this concert was part of their The Joshua Tree Tour I knew they would perform the whole album in sequential order as the centre-piece, I wondered how I would react to hearing songs which I knew off-by-heart but where half of the album had rarely been played live, if at all. This was going to be a subjective experience for me, one which I approached with my mind still full of the marvellous conversation I'd enjoyed at breakfast that morning, when I spoke about the Lord to a waitress at the hotel where my wife and I were staying. Talking about religion seemed to be occupying many on that hot, stifling afternoon in Twickenham as Jehovah's Witnesses were forlornly trying to distribute a publication entitled I Still Haven't Found What I'm Looking For, their shirts and ties contrasting with the (almost obligatory) band T-Shirts seemingly being worn by every other ticket-holder.

Many concert-goers were clearly sympathetic to the Christian beliefs of their favourites, even if they would not claim allegiance to them. God-bothering and moral questions were evident from the off, beginning with the words of the rolling poetry on display on the big screen, long before support act Noel Gallagher's High Flying Birds took to the stage. By now, the sheer heat (30 degrees or more), beating sun and considerable amounts of alcohol being consumed by some fans were leading to surges of aggression in the audience. Already, during the support, a man had had to be held up by two friends, just in front of us, whilst still clutching a bottle of wine. Then another fan elbowed his way past us, leaving his vantage position. The first I knew that he was returning, 20 minutes' later, was when I became aware of somebody behind me, man-handling me. Before I knew it, dressed from head-to-toe in U2 merchandise and standing eye-to-eye in front of me now, he bellowed, "Either you move, or I move through you," before continuing to barge past us all. I replied, "I think the words you're looking for are 'excuse me'. Why don't you try using them...?" Several people spoke out in support of me. He just sneered. That was not my first surprise, that day.

Soon, U2 were on stage and the thousands now assembled, drunk or not, were singing the overtly Christian statements in songs like "Sunday Bloody Sunday" with as much gusto as the other lyrics. But it was when U2 launched into the tracks for the album celebrating a 30th anniversary that the pushing and surges began again. People were desperate to get as close as possible and it was evident just how much these songs meant to people, especially those much older than 30 themselves. I myself was reduced to tears at certain points during 'Joshua Tree' renditions, but this was partly due to things I had read in, of all places, the official programme.

Centre-piece in the publication was an interview with Dave Batstone, a Christian who talked about the visit by Bono to a refugee camp in Ethiopia in 1985 and how Batstone and the singer had jointly visited Nicaragua and El Salvador the following year to personally help the victims of countries in mid-civil war. Whilst I was certainly aware of these activities, the printed reminiscence finally revealed to me just what a profound impact the visits had had upon a younger Bono - not just in how much of an influence they had upon the U2 lyrics of 1987, but also upon the relatively new faith of the singer particularly, in how they facilitated an immense progression from Sunday-best religion to mature, practical, Christian concern. This continues to be expressed in more recent material such as the rendition of "Ultraviolet (Light My Way)", here complete with images of refugees from Syria and brave women pioneers from history - including Mother Theresa and gospel singer Sister Rosetta Tharpe.

Rare tracks from three decades past included a searing, visceral rendition of "Exit" which left many of us overwhelmed, and "Red Hill Mining Town", performed for the very first time at the start of this tour and here accompanied by a Salvation Army Brass Band, whom Bono introduced as the new brass section of the group! But perhaps the memorable point for many came right at the end when Noel Gallagher returned to share vocal duties for a cover of Oasis' "Don't Look Back In Anger", which sounded communal and gospel in its arrangement.

Much later, as a taxi-driver took us from the station back to our hotel, he informed us that his previous fare had also been a couple returning from the show. "They were complaining that he was doing too much preaching from the stage. Is that true?" It gave us the chance to witness to what Bono had been proclaiming.

For more on U2 visit the U2 artist profile