Ulf: Swedish rock pioneer and a prophet and soldier

Tony Cummings quizzed ULF CHRISTIANSSON about his past and present 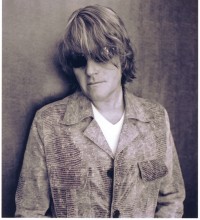 Tony: There are songs on 'Entertainers & Soldiers' which seem improvisational and similar to the kind of things on the 'Prophet' album. Do you record tracks and simply allow the Spirit to give you words?

Ulf: This time I started with just putting the basics of the song on tape together with a click and a guitar. Then I added different guitars mostly played with only one or two notes and a wah wah pedal, then I did the bass lines and the last thing we did was bringing down a drummer from Stockholm to Gothenburg to do the final drums together with the drum loops or just a click. Some of lyrics were written before the songs were completed while some lyrics were done at the end. Most of my vocals were done just before the drums.

This is in many ways the opposite of how I usually do a recording. 'Entertainers & Soldiers' was not really made in the same way as 'Prophet', where we just played and improvised and saw words and music take form while we improvised in the studio. I tried to do the same with the band when I started this recording but it did not just work for some reason, maybe it was something I tried to repeat instead of seeking and spending time on finding new ways, because that was what I had to do in the end anyway.

I believe when you are in the business of the Kingdom, there's always a need for flexibility and you also have to be ready and willing to change. you just can't go by methods if you want to find new ways, this is also true in music. I think I have many things through the years and I know more today of "seeing where I want to go" in music I create and ask the Holy Spirit to lead me to that place of excitement, even though many times I have to just jump out and take the risk that faith demands. This is not, as I believe, being "too much" spiritually but music is spiritual.

Tony: Does Jerusalem still exist in any form?

Ulf: Yes, Jerusalem is still working but we have not been touring in the same way we did in the past. One reason for that is that I've been living in America for three years. We did six concerts in Sweden and Norway this year and we enjoyed it very much, it was very powerful. I think that God used us to break down a lot of religious thinking in the Church and also in the secular scene. I also think we saved a lot of "Christian kids" that were suffering from religion, to go on with Jesus and stopped several from throwing "the baby out with the bathwater". I know that Jerusalem took a lot of heat and persecution when we started and I think by this we broke down the barriers for many artists and bands today, who have a much easier way to go than we had in the end of the '70s and in the '80s.but there are other battles today to fight and to win.

Tony: One review (in HM magazine) of 'Entertainers & Soldiers' suggested that your high register voice resembled Jeremy Enigk of Sunny Day Real Estate. Has Jeremy been an influence?

Ulf: I'm sorry but I truly do not know who this guy is. I haven't listened to much music (secular or Christian) these last years, mainly because of a thing God told me some years back during a 40 day fast.

Tony: You seem to be moving away from the classic heavy rock sound of Jerusalem. Is that fair comment?

Ulf: I do not know if I have thought of it like that even though when we do concerts or work with Jerusalem we try to stay more in the area we've been but if you listen to "Dancing On The Head Of The Serpent" and compare it to "Prophet" it is picturing a big step musically and in the lyrics for us. Of course I will try to find new ways when I'm on a musical journey like the one I've been on on 'E&S', it is not so much styles as ways of saying things and you need different musical language depending on what you want to say. Music and prophetic anointing work very close together, and if we release ourselves from a lot of the noise that constantly is surrounding us, we will also be able to hear what the Spirit is saying NOW, at this very moment. Revelation is given for a price, it costs something. This is much more important than trends and styles and will also give us a freedom to express ourselves in new ways, but as Kingdom-builders and not as some kind of stars. It's time for a new breed of artists and musicians that are totally consumed by bringing his Kingdom into reality here on earth, this is far more exiting than standing in line for a hit song or temporary success. Babylon is producing this mentality in us (the Church as well) and we have bought the whole package with no questions asked.

Tony: What is your greatest spiritual concern at this time?

Ulf: I would say my life is about his Kingdom, and what I do NOT want it to be about is MY kingdom that always fails in the end, or my personal success that is not producing any REAL fruit in people's lives. It is all a matter of being an entertainer looking to be acknowledged by men rather than by God, or a soldier paying the price of bringing down the reality of David's life here on earth. David was obviously very gifted as a musician and a singer and so are many today, but he had to learn to become a soldier in the desert, as many gifted people have not today, and David had to be anointed to become a king with all the misunderstandings and persecution that comes with that, as many have run away from today, because it didn't fit with the picture Babylon has planted in us. This is so much against the thinking of the ruler of this world, but it is the power of God manifested here on earth. We must stop being ashamed of his simpleness and start to battle against our own fleshly desires to walk by our intellect and unrenewed minds instead of our hearts. Many people in the Church do not even understand what I'm talking about because of being conformed to this world. So God's not impressed by skilled musicians and artists. Man may be, but God's only impressed by passion and hunger for his Kingdom that is on its way to come big time. Because of this compromise we've lost the ability to separate the selfish ways of men from the ways of the Spirit that always leads to victory. Victory is not the same as success; Jesus hanging on the cross was really the greatest victory anyone could win, but it didn't look like it. We must find his ways in music and arts, and we will, but only if we seek him with all our heart. This is my passion and concern for this time.