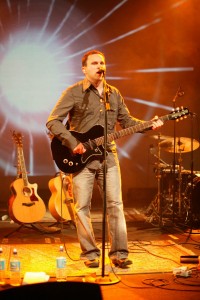 In its 12th year, the quality of artists performing at Ultimate Event held at Alton Towers have become second to none. With such top name attractions as Delirious?, Newsboys and Audio Adrenaline over the last three years alone, the ultimate event lives up to its name. This year there was Matt Redman, Rebecca St James and Tait to look forward to. Unfortunately, after spending too much time on the teacups, I was late for the concert and regrettably missed Abundant Life's youth ministry band RPM and those gritty holy hip-hoppers GreenJade, (perhaps you could write your view of them on the forum?).

Having never experienced Matt Redman before, I was certainly looking forward to worship from the man himself. He kicked off with a wonderfully progressive version of "Undignified". Then it was time for probably one of the most sung worship songs in church for goodness knows how long. "Blessed Be Your Name" stirred nearly everybody to close their eyes and really focus on the awesomeness of God. It was so moving to be finally led in worship by the man that wrote the song. Tim Hughes' "Light Of The World" followed. This again was a truly wonderful experience. A sea of hands were lifted up and the massed voices of worshippers would have stirred the hardest heart. There followed a rocking Soul Survivor favourite "Dancing Generation" with large swathes of the crowd jumping up and down and dancing to express their love and thanks to God. Matt well deserves his reputation as a powerful man of worship.

After Matt the throng were entertained and challenged by frequent Ultimate Event visitors Tough Talk. The London-based evangelists use their feats of strength and body building prowess to connect with people and explain how God changed their lives of crime and violence to ones where love not hatred dominates their lifestyles. They challenged the non-believers at the concert. It must have been encouraging for Tough Talk when many raised their hands, showing that they wanted to become Christians.

Tough Talk were followed by a performance from one of CCM's most accomplished artists, Rebecca St James. As part of her European Tour which started on Friday and finishes in Moscow on 4th June, Rebecca looked and sounded in fine form. Her song "Reborn" from the 2002 album was really well received by the enthusiastic crowd and helped set the scene for the remaining time when Rebecca and her band held the stage. Those who have been following the career of the Australian-born singer will know Rebecca cares about more than just music. The child development organisation Compassion International not only had a stand at the event, in her set Rebecca spoke about the ministry. A giant screen showing a video shot during her trip to Rwanda was moving stuff. This was followed with a song, "Take All Of Me", from Rebecca's new album, accompanied by Matt Redman which really excited the crowd, and with the words to the song on the screen we moved back into worship. After this it was another song from the 'Reborn' album which highlighted another line of Rebecca's work away from music. Wait For Me is an exhortation for young people to honour God's intention for sex by engaging in it only within the gift of marriage. Rebecca's performance finished with a version of "Awesome God" which caused everyone enter into a great moment of praise and worship. All in all, a wonderful performance from Rebecca. 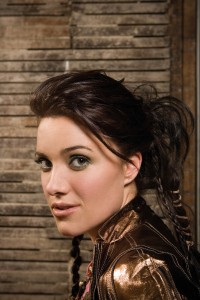 Then the headline. For those of us who go dewey-eyed over the dc Talk era, Michael Tait and his band was something we eagerly awaited. Tait did not disappoint. Their set started off with the impressive interpretation of Eddie Grant's "Electric Avenue". A few songs later, the Charlie Peacock-penned dc Talk classic "In The Light" rocked from the stage. The throng loved it, with many people singing along, jumping up and down and raising their hands. Michael himself was a human dynamo, running all around the stage and getting close to the onlookers. With songs such as "All You Got" and "Spy" and also songs from the albums 'Empty' and the followup 'Lose This Life' the crowd were loving every minute of the concert. One of the things that will make this performance memorable though is that way that Michael introduced the rest of the band, over a medley consisting of the Mission Impossible theme, Bon Jovi's "Living On A Prayer" and the Chilli Peppers' "Give It Away" were all given tongue-in-cheek renditions. Then the focus was turned to the back of the stage with Tait's drummer Chad (who owes his drumming interest to Animal from The Muppet Show) did some virtuoso drum solos with, and without, his sticks.

This was followed by the first ever live performance of a new Tait song, "Wait" which was well received. However, if you were to ask people what will live long in their memory about this May evening, it will be Tait's no-holds-barred rendition of the song "Jesus Freak". Performed with the same highly charged abandon of the original, it was as if dc Talk never left us. It was absolutely amazing; something I think will make me smile every time I think of it. Nobody was prepared for the excitement that was buzzing around the crowd and on the stage at the song's climax. It goes without saying that the throng who'd attended Ultimate Event '06 went home happy.

Looking back at the concert and it is nearly 10 years ago! It is 1 of the most memorable highlights of my life! I still get goosebumps of His presence that day.

Great report. RPM really touched God that day; some say they sound like hillsong but you could still feel the anointing of God upon them There praise and worship led me into deepr worship of our God. The whole event was a blessing save for Tait who felt somewhat removed from praising God.

Great review Craig! Makes me want to go to the event!

Michael Tait was brilliant i wanted to meet him since i was 5 and when he came down of the stage,i just happened to be on the front row! my mum said toch him touch him and i said no its michael tait but michael reached out grabbed my arm and hugged me,it was a dream true.i had him autograph lots of things to.The rest of the groups were awesome but i have always loved Tait and michael better than any of the others that were at the event.

It was a really amazing concert and definitly the highlight was Tait's rendition of "Jesus Freak." Rebecca St James sang beautifully and Matt Redman led a powerful worship session. Greenjade were also energetic performers often having to improvise to fill in gaps whilst waiting for the technical stuff to work. They really encouraged the crowd to embrace the rain that poured down on us. However I agree with Alistair RPM were poor and seemed to be mre concerned about jumping about the stage than engaging and leading the crowd in worship. But all in all it was a fantastic concert.

IT WAS AMAZING, having been to the last 3yrs i hve to say, it was the best yr!
Green Jade were good, except for the errors in there backing disc. Didnt get into RPM, trying to copy Hillsong United, but failed. Matt Rocked wiv his worship set! Next my favourite, Becca, AMAZING set. she gave it her all, it rocked so hard. TAIT blew me away wiv some awsome DC Talk covers. Brilliant evening, x

i went and i thought it was amazing i have never been b4 bt i wnt 2 go again.

Couldn't agree more anout Matt Redman, the atmosphere for his set was amazing, there can't be many better worship leaders around. Rebecca St James was equally as good and Tait were a perfect stunning end. Although I saw all the RPM set and struggled to get into it.

Sweet report Craig, it was an amazing concert! Wonder what next year will be like. Still hyped about seeing Tait, they were amazing! I turned up to the concert just as RPM were doing their last song, n from what i heard i wish i had left earlier.