Ultimate Event: The ever growing popularity of the annual Alton Towers event

In May Alton Towers will again be crowded for the ULTIMATE EVENT. Helen Knight interviewed Tim Jones, the man behind a radical vision to connect young people to the Gospel. 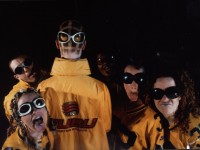 On 11th May up to 9000 people will crowd into Britain's premier theme park, Staffordshire's Alton Towers, for a day of white-knuckle rides and an evening crammed full of high octane music from top Christian music artists. Headlining this year's Ultimate Event are The Tribe with Oxygen, My Bottlerockit and Nicola lending their support and with special guest Stacie Orrico flying in from the States while comedian Bobby Ball, hard-hitting communicators Tough Talk and a host of DJs will ensure it's going to be a memorable day. There is no height restriction, but it is certainly not for the faint-hearted!

Every year Alton Towers sees thousands of young people attend the Event and each festival has experienced its own surprising and inspiring encounters with God. The most mind-blowing experience was a few years ago, remembers Tim, "during a Tribe set there was a full Tribe-type thing kicking off and right in the middle someone sang 'Amazing Grace' acapella. I was in a position to see the whole crowd and it was as if a wave of God swept the arena and the normal Event buzz was hushed as God arrived. Andy Hawthorne then spoke about how the two most recorded songs were 'My Way' and 'Amazing Grace'. His challenge came, 'Are you living in Amazing Grace or the hopelessness of doing it My Way?' The response of people giving their lives to God there and then was awesome."

The Ultimate Event snuggles perfectly between the Spring conferences and the Christian festival season. Tim comments, "We make sure we miss Cup Final Day! As a Derby fan this has no real consequence, but we live by faith." There is always hope, Tim!

It was in the early 1990s whilst Mark Sherratt was working in partnership with the Youth Alive National Team (the youth arm of the Assemblies Of God) that he received inspiration for a unique event which would combine the twin attractions of Alton Towers' phenomenal selection of rides with some of best Christian music and arts. Mark is now the director of the Ultimate Event and has watched the Alton Towers event expand and transform into the independent and cross-denominational occasion it is today. The Event, however, still retains the sense of adventure and clear spiritual vision that the original event was founded on, "Firstly, and probably most essentially, is the evangelistic emphasis," explains Tim. "We seek not just to entertain, but create a non-cringe day so that young people can invite their non-Christian friends with credibility and confidence in a great day out. Secondly, we are committed to excellence. We firmly believe our nation and our young people deserve the best we can give not just to impress but to potentially change a generation. Thirdly, Christian music has an image where you may listen to it in the youth group but put real music on when you get home or with your friends. We see a new move of God in Christian music and a new spirit in the industry where bands, promoters, record companies and media are working together to change the culture. We want to play our part in what we believe will be a significant move of God in the coming years."

Says Tim, "The Lord is never late although he is never early either. His timing is perfect. Every year the challenge gets bigger but with every need, every deadline and every financial commitment, God honours us as we strive to honour him. Although we work hard it would be fruitless without the grace and favour of God which covers the Event. Alton Towers has been in this from day one. They share our convictions on excellence and they are very supportive of what we seek to achieve. Again the favour of God has been evident in so much of what has happened."

It is not just the UE that testifies to God's blessing and revelation. Tim tells of many personal accounts of people meeting with God for the first time. "The best story of last year was about a teenager who worked for one of our contractors. Halfway through the Event he asked what it meant to be a Christian and shortly afterwards gave his life to the Lord. He then said that the job he was doing was not how he wanted to spend his life and how he wanted to serve his new found Saviour and was down the Exhibition marquee before you could say Billy Graham Evangelistic Society!"

Tim's funniest memory of the one of the Events was when Martin Smith stage-dived, "So many objects were removed from the singer he emerged bewildered and bedraggled, lucky to escape with some semblance of dignity." Yet for every anecdote there is a more serious side to the day and he likens the Ultimate Event to a stick of rock, "Wherever you break into it we should be able to see the name of Jesus written through the core."

Tim's hopes for this year's Ultimate Event are "simply to push the event where no event has gone before. To see more people saved, more motivated to evangelism and changing their generation but most importantly as the Old Testament says 'to make God's name great.'"

The opinions expressed in this article are not necessarily those held by Cross Rhythms. Any expressed views were accurate at the time of publishing but may or may not reflect the views of the individuals concerned at a later date.
About Helen Knight
Helen Knight is a Bristol-based journalist who is the latest to join the expanding Cross Rhythms media team.

It's been a while since I have been to one of these events. Does anyone know if there is one in 2014?

Great write up and event. I am hoping to bring a group of young people to the next ultimate event next may. How and when can we book?