The last time Cross Rhythms wrote about Underoath was a short Q&A accompanying a review of 2002's 'The Changing Of Times'. As it's turned out, that album title has taken on prophetic resonance. For today the Florida hardcore band have moved from cult-following journeymen to bona fide American rock stars with their acclaimed 'Define The Great Line' entering Billboard's mainstream album chart at an unprecedented number two position. Produced by Atlanta-based producer/drummer Matt Goldman and Kilswitch Engage guitarist Adam Dutckiwicz 'Define The Great Line' is a creative tour de force, more complex and visceral than anything the band have cut previously but paradoxically more commercial, with a sonically thrilling mix from Chris Lord-Alge (P.O.D., Hoobastank) ensuring it be acknowledged as a classic in the years to come. It is a long way on from their 2004 release 'They're Only Chasing Safety'. The band's guitarist Tim McTague told CCM magazine, "One (album) sounds like a bunch of teenagers who are still looking to discover themselves. And (the other) sound like real dudes who know what they want, (who) are actually executing finally what they've had in their brain and the back of their heads for years but have never been able to express. This is the record that, since we joined this band, we knew was possible, but we didn't know how to get there, how to do it. Now, we finally did. This is the record that Underoath was made to make."

The original line up of Underoath - Dallas Taylor (vocals), Corey Steger, Tim McTague (guitars), Octavio (bass) and Aaron Gillespie (drums) formed in Florida in 1998. They originally advertised their style as "a mix of hardcore with black metal." The sleeve of their first album 'Acts Of Desperation' (Takehold) boldly proclaimed "the sole purpose of this record is to let you know that you are freed by the blood of Jesus." The songs though were hardly evangelistic dealing with topics like suicide, rape and child abuse. The follow up album, 2000's 'Cries Of The Past' followed. HM magazine wrote, "If brutal metal/black metal-influenced hardcore with a touch of '80s metal is right up your alley, then Underoath is the band for you." In 2001 the band were signed to Seattle's pioneering rock label Tooth & Nail and placed on their hard music subsidiary Solid State. About Underoath's 2002 debut on the label 'The Changing Of Times' Cross Rhythms reviewer wrote, "An interesting mix of hardcore and indie rock, utilising loops, keyboards, acoustic guitars and melodic vocal harmonies amongst the onslaught of heavy guitars and screeching hardcore vocals."

In 2003 things were changing for the band. Vocalist Dallas Taylor left and has since formed the bands Maylene And The Sons Of Disaster. His replacement, Spencer Chamberlain, turned out to be a revelation. 2004's 'They're Only Chasing Safety' sold really well as the band toured relentlessly. Tim McTague told CCM about Underoath's ever-increasing grassroots support, "I think the whole mainstream process of getting a single and working it to radio and blowing a band up isn't real. It's conjuring up false bands and false hype in order to sell a product. Even though that does work a lot of times - and the band will go platinum, double platinum, triple platinum, and be the biggest thing one year - they turn around the next year and nobody cares about them because the people that bought their record truly didn't want to buy their record. They weren't really grasping anything besides the fact that they couldn't escape it on TV; they couldn't escape it on the radio and were, more or less, force-fed it. We didn't sell records by doing radio shows and being on MTV. We sold records by touring and by kids coming out to see us. The kids that come out to see us - the kids that come out to the shows - those are the real kids; those are the real fans. Those are the people you want buying your records. We didn't buy a bus until we were over 100,000 or 120,000 records sold. That was our goal, our rule. Until we made it to the level where we could afford a bus and not go home broke and starving, we weren't going to have it. We'll tough it out as long as we need. It's all about making smart, grounded, humble decisions with the way you do your business. It's not about looking cool or looking rich or looking big."

Underoath's Christian lifestyle is well known among their fans. Said the band's Aaron Gillespie, "I tend to think that we're extremely honest with people. God gave me my very life and breath, so why wouldn't I be honest? That's the way I kinda view it. Jesus is the reason that I walk this earth every day. He's the reason that I wake up every morning, the breath in my lungs, my beating heart. Why wouldn't I give back in that sense?" 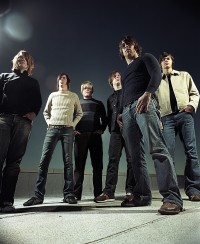 The band though would never claim to be hardcore proselytisers. Said Tim McTague, "We're not here to hype kids up and have a big ol' Jesus rally. We want to be real with kids. We want kids to see us for who we are, to see that we're not perfect and that we're just dudes that play music that have found something greater."

The release of 'Define The Great Line' has taken Underoath up to the next level of popularity. In best selling mainstream magazine USA Today Brian Mansfield enthused, "Spencer Chamberlain howls against jagged riffs and rhythms that shift so suddenly he sounds like he's walking an active fault line. In a genre where the screams and discordant guitars too often signify unfocused rage and despair, Underoath at least glimpses hope, its spirit broken but not destroyed, desolate but not doomed." Meanwhile the Aquarian Weekly lauded Underoath as ".the most dynamic musical force to come out of Florida in the past decade."

Their stage shows have got the mainstream media applauding. In the Los Angeles Times Lina Lecaro wrote, "Underoath, which headlined the northern main stage in late afternoon, incited the most moshing and crowd-surfing, so much so that a phalanx of security guards stood just below the stage to carry sweaty and tattered daredevils safely backstage. Underoath has been pigeonholed as a Christian band for their between-song Jesus banter, but its religious views seemed irrelevant once the band's growling screamo-style tunes got revved up. The group showed the melodic chops to transcend both themes of the pulpit and the mayhem of the pit."

Despite Lecaro's comments, Underoath take every opportunity to speak of their Christian faith, and according to a piece Tim McTague penned recently for CCM magazine, it's a radical discipleship more resembling the passionate faith of the late Jesus music pioneer Keith Green than many of the entertainment-for-evangelical attitudes shown by many of the Nashville CCM crowd. McTague wrote, "I believe that we, as 'Christians', have lost sight of what Christ intended our lives to be and the purpose and faith he gave his life to teach us. As long as we give our 39 cents a day and make it to church on Wednesday and Sunday, we're all good.the American way.the new 'Christianity'. Whatever happened to the church of Acts where people would sell all they had and give to the poor and join a body of thousands of people, living a life of prayer, community and servanthood? We now sit, 2,000 years later, in our comfortable homes and Lexuses and mega-church youth groups watching the rest of the world rot away and starve to death. Where is Christ in our watered down, self-serving hybrid of faith and hypocrisy.the new 'Christianity'? God exists to pay our mortgages and heal our families, but, when it comes time to sacrifice something of our own, we look away. We're too concerned with church attendance and having the biggest building in town to see that we're wasting our days and God's money for our own comfort and well-being. The answer to our world's issues isn't charity drives and new taxes and Republican parties.but, rather, a complete renewal of thinking. Loving people as you would want to be loved, clothing the cold, feeding the hungry and housing the homeless - not at God's expense but our own - giving all we have in order to shine the light of Christ and live a life that counts.

"Somewhere along the way, we decided that being a Christian wasn't a life of serving but a life of being served. I can't change anything with 400 words.but you can change the world. God is real and is waiting for a few real Christians to step up and let him work through them the way he worked through the disciples. But it will cost everything."

i totally agree with Kyle. "Christians" have become so much about "living the faith", that they're not living it at all. I am disapointed in Underoath in some ways though. On their most recent album, they've been shown drinking and smoking in videos. I love Underoath and I think their motives and hearts are in the right place, but the fame and fortune is begining to get to them. I pray for them every day in hopes that they'll stick to Christ and remember why they've been placed in the position of leadership they're in.

I believe its about time that everyone should stop doing things for ourselves but do things for other people.
Like it was stated in the article. Jesus didnt heal the healthy. Jesus healed the sick and he lead the lost to a much better place. We need to show non-christians that there is a higher power and there is a better place than earth, it just takes work and sacrafice to get there.

For more on Underoath visit the Underoath artist profile