One of the foundation stones of Hillsong United, Australian singer, songwriter and worship leader REUBEN MORGAN has now launched out as a solo artist. Joe Montague met the man. 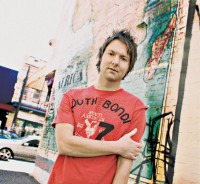 I stood in church this morning as we sang "My Redeemer Lives" and as I felt the Holy Spirit move within me I bowed my head and said thank you for Reuben Morgan, the man who authored the song. The week before I had the opportunity to spend a few minutes with Morgan and on this particular day the song took on even greater meaning as I now understood the heart behind the song.

You could be an avid music fan and still not recognize the name of this tremendously gifted songwriter who has also penned "You Said", "Lord I Give You My Heart", "I Adore You" and "Hear Our Praises", among others. Reuben Morgan is a member of the worship staff at Hillsong Church in Sydney, Australia where he works closely with colleague Darlene Zschech. His solo debut album, 'World Through Our Eyes', has now been released in the UK through Fierce! Distribution.

My conversation with Morgan drifted into an area the singer/songwriter knows well, worship, "I think the challenge of the Church is to keep worship accessible to all people not to exclude people through style and presentation. I think that's a huge challenge for the Church and especially in our day when there is so much variety and people can be so specialised."

Morgan views his role as a solo artist to be merely an extension of the Hillsong ministry. When you talk to this humble and ever grateful man you become aware that for Morgan this isn't about building a solo career, it is about continuing his ministry as he remains a member of the Hillsong staff. He'd started with Hillsong as youth pastor where he helped to establish Hillsong United which, of course, are today one of the most widely popular youth praise bands in the international Church. Reuben helped produce four of the United albums, 'Everyday', 'Best Friend', 'King Of Majesty' and 'To The Ends Of The Earth'.

As we continued to talk he thoughtfully considered my questions concerning the ever changing face of worship on the international scene. "I think what everybody needs to keep at the core is worship can't be exclusive. It can't shut people out and not include people. I think that's a challenge. It can't be elitist. It can't be exclusive." The Aussie troubadour believes that more than any other time in our history a greater acceptance for diversity in worship styles exists. He says worship now appears to be at the core of the music being created. While concert goers still wish to be entertained they are also looking for individuals to lead them in worship.

Morgan notes, "People are really hungry and inspired for worship. As far as where it is going, God is doing what he has always been doing and that is building the Church. I think that worship will spring forth from that (as well as) teaching, healing and salvation. People have been reminded to get their eyes on God. I think at the core God is passionate about his Church. True worship comes out of revelation of God. I need God to break through to my world before I can respond back to him."

Reuben uses words like "we" rather than "I" to discuss his accomplishments and dreams, a direct reference to the rest of the Hillsong team. As we talked about the co-write he did for fellow Australian mate Paul Colman's recent US hit "Gloria: All God's Children" you have to practically pry out of him that yes, he was one of the contributors whereas Colman is much more forceful about Morgan's contribution.

About his wife Sarah Reuben says, "I like her commitment to God. It is the most valuable thing that we have and I think that it keeps our relationship on track." It is his hope that as parents they will be able to pass onto their two year old son Jones the importance of "a faith that is authentic and that he can take on as his own. There are all the things that go with that, honesty, integrity and confidence."

While talking to Morgan, a man who at a relatively young age has already given so much to the world, I was almost hesitant to ask him if there is something else he feels he would like to do. "I don't feel like I've really started yet. There's so much left to do. We're really passionate about missions. My wife and I are really passionate about Africa and helping meet the needs of the people. We (Sarah and Reuben) are partnering with a church in Johannesburg to support an orphanage called Sun-Child Baby Home. Things like that are what I want to do and where I want to grow. I think there is no end to that as long as mothers are leaving their babies in the gutter or giving birth and leaving their babies out on their own for anyone to pick up and turn into trash. There is no end to the need. We always want to be part of that." His other passion is to continue to build and strengthen churches and as he says, we have only begun to scratch the surface.

I think for me it is so special because in all written songs of Morgan you can't find only one song to dislike
But otherwise always you feel thirsty to hear them bcz' they are inspirational
My favorites are ''You're holy'';''Eagles's wings''
May Almighty God bless Morgan's Feature

i love hillsong, the whole worship team but i couldnt help bt notice reuben morgan, you stand out and you are so humble.its good to know that such great and selfless people like you are for God am so encouraged.i only wish that i could be part of such a congregation with such great worship.perhaps you could bring a concert here in kenya.

hi reuben morgan im so very proud of you because of your beautiful song that u made to glorify GOD when i have a problem i always hear your song to GOD and i feel thank full GOD BLESS!!!!! REUBEN MORGAN

when i heard the song "Mighty to save", I realized that My Lord Jesus is the awesome and greatest God, so He can move all my burdens and troubles like He move the mountain... Now, I'm more than a conquerer by His holy blood...

when my husband left me to another girl i feel very lost.then i wanted to die.that time ,some of my friends invited me to go church , to be christian believers,i feel very happy and i ddnt LOSThope anymore bcoz JESUS IS WITH ME,,,thanks to GOD and rueben morgan to his song YOU SAID & MIGHTY TO SAVE and the whole cast of hillsong united. i love all ur songs.......thanks and GOD BLESS

you 've been doing a wonderful job through your music in my life and my friend. please i want to know the criteria of joinng leader college australia. i would be very glad if my request will be granted.

I have always heard about hillsong australia as a praise and worship songs fan, but I began to get their CDs since last November. I Can always feel the spirit that actually moved the singers every time I listen to each album, and I have especially been touched by ALL the songs from Reuben Morgan, so I thank the Lord, Reuben himself and the whole group as well as the United I enjoy so much. I found the heart of worship with all of you, God bless you always.