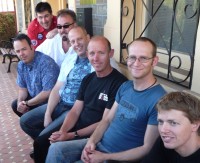 Cross Rhythms wrote about Australia's Unitopia last year in an article chronicling some of the bands on the 'CPR Vol 3' various artists album. After emphasising that Unitopia were "not a Christian progressive rock band per se," keyboard player and composer Sean Timms went on to express his hope "to bring that high quality of musicianship into a New Testament setting." Now Sean and his fellow band members have done just that. Unitopia's 'Artificial' album, released in Europe through Inside Out Music, has been receiving glowing reviews. The website www.prognaut.com enthused, "'Artificial' offers the band the opportunity to advance deep into the hearts and minds of progressive rock fans around the globe" while www.thegoldenbird.wordpress.com raved, "Unitopia show themselves to be head and shoulders above almost every other band in the music scene."

Unitopia's origins go back to 1996 when Adelaide-based keyboard player and studio owner Sean Timms met singer and guitarist Mark Trueack. They established a musical relationship and with other players released Unitopia's debut album 'More Than A Dream' - though it did take eight years to complete! The band's next album 'The Garden' (2008) really began to open doors for the band. Unitopia became the first Australian band to sign to Inside Out Records, the world's largest progressive rock label. On its release 'The Garden' got collective thumbs up from the critics. DB magazine wrote, "'The Garden' is epic, diverse, grandiose, musically brilliant, lyrically complex and just a tad self-indulgent. In short, everything a good prog rock album should be.' Billboard magazine wrote, "'The Garden' is a respectable, nicely crafted example of what prog rock had to offer in 2008. 'The Garden' has a lot of heart."

On the release of 'The Garden' Cross Rhythms broadcaster Jonathan Bellamy suggested that the message of 'The Garden' was hope coming from despair. Mark Trueack agreed. He said, "We try to not be doom and gloom; there's enough of that from the media, from just general aspects of everyday life, and so we like to say things in a positive way as much as possible. That's not to say that everything is sort of very, very light and breezy, we do have some very strong feelings about certain areas of concern in this world, but that's not to say that you have to portray that in a negative way. We always try to be as positive and uplifting and optimistic as we can."

As the band began working on the album that was to become 'Artificial', Unitopia changed some of its lineup. Mark Trueack (lead vocals, mandolin, banjo), Sean Timms (keyboards), Matt Williams (guitars) and Tim Irrgang (percussion) remain from the original formation and have been joined by Peter Raidel (saxes), Shaun Duncan (bass) and Jamie Jones. Prior to its release in Europe on 3rd May and in the US on 4th May, a press release described 'Artificial' as using "symphonic, progressive, world, jazz and art rock elements to illustrate the dichotomy of an artificial world that is developing within our real world and how we as human beings relate to each of these worlds."

In an interview on the www.progressor.net website Mark Trueack described Unitopia's musical approach to 'Artificial'. "One of the things I told Sean that we can't afford to do was to play too much Hammond! Hammond organ is just absolutely all over the place in the prog industry! We have to be more original than what prog is right now, and even more original than it could be in the future. And we'd like to use more live instruments. So there is very little Hammond organ on 'Artificial' and there is a lot more guitar. On 'Artificial' Sean sounds like Sean! And Matt (Williams) is playing a big role in this album - the guitar that he plays is absolutely awesome. As for me - I play lots of mandolin and banjo."

Mark admitted that 'Artificial' gets very close to being that other clichÃ© of progressive rock, the concept album. "Yes, it is more of a concept project than 'The Garden' was. It tells a story with individual songs that are linked together - a story telling how we as humans have become more artificial. Our epic piece talks about the famous Tesla, the guy who invented the electric coil, specially narrated by Ed Unitsky. So Ed gets a cameo."

In fact it's the track featuring that cameo, "Tesla", which is the focal point of the whole album and a veritable production masterpiece. Over a ticking clock, bells, keys and sweeping strings the slow passage of time is conveyed before Unitsky utters one of Tesla's famed quotes, 'Like a force of light, in an instant, the truth was revealed.' Then comes the deeply poignant vocal line sung by Mark, "Oh how I loved her, nothing else mattered," with a full choir behind him. Then comes a full-on synthesizer assault by Sean followed by a full orchestra, clapping and Spanish/Moroccan sounds before Peter Raidel's sax soars over the swirling orchestration. Mark returns with the eerie vocal line, "Now let me present to you the egg of Columbus." The band rolls into a rhythm of instruments with congas, drums, sax, piano, bass and guitar. The sax and piano shine as a glamorous jazz groove, complete with a samba-like rhythm, moves in and out of the mix. The strings and synths support Mark's vocal assault as the song winds through its many twists and turns before a piano and a beautiful flute glide in with Matt's acoustic guitar and mandolin. "Oh, how I loved her, nothing else mattered" comes that vocal line again. "Have we missed the opportunity to live forever?"

An epic song on a stunning album which will no doubt have progressive rock fans excitedly discussing its merits for years to come.

For more on Unitopia visit the Unitopia artist profile