Virtue: The R&B gospel trio speak about music and ministry

In an age of prurient R&B gospel divas VIRTUE stand for something else. Mark Weber reports. 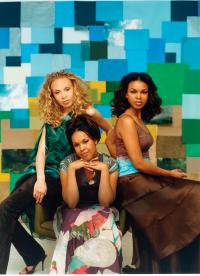 When fans of the new wave of female R&B gospel groups list their favourite aggregations, one of three teams usually get name-checked, Out Of Eden, Trin-I-Tee 5:7 and Virtue. The latter trio of testifying soul sisters - Karima Trotter Kibble, Shavonne Floyd Sampson and Ebony Trotter - came together at Oakwood College in Huntsville, Alabama (the same Seventh Day Adventist establishment that spawned those acapella hitmakers Take 6).

Virtue first got their start in 1994 in Oakwood College, when Karima Trotter was asked to get a group together to perform at a Friday night youth service. She, along with sister Ebony and friend Shavonne, were then known as Endurance and sang for different community events in New Orleans. They added another member, Negelle Sumter, and recorded their first album as Virtue. Shavonne left the group to become a full time mom and was replaced by Karima and Ebony's sister Heather, then Negelle also left the group for full time motherhood. "Who would have thought that Virtue would end up being the Trotter Sisters!" exclaims Karima. As a result, this ministry has evolved into a more personal one.

Because they are all sisters, they now make this element a big part of their ministry. They share their testimony of struggling to grow up in a single-parent home in hopes of offering encouragement to single parents and children growing up in the same circumstances. Also they don't hesitate to reveal that being in the industry is hard. "We've been through so much in our individual lives and careers that we just want to share what we've learned to help others think more positively and keep fighting to win," says Heather.

Although albums - 'Virtue' (1997), 'Get Ready' (1999), 'Virtuosity' (2001) and 'Free' (2003) - have hardly been prolific their slick harmonies, soulful leads and punchy contemporary arrangements have gained them many admirers. A song, "Only God's In This" from their 'Free' album, shows that despite their winning ways with a funky R&B groove Virtue are a long, long way from the blatant sex talk and unrestrained hedonism of much of today's mainstream R&B. The chorus goes, "This ain't about no relationships/Not the kinda party that be pop'n Cris'/All that bling bling/Just leave it where it is/Only God's in this."

"At this point in our lives, we are growing and we've let go of so many things in order to grow," says Heather. "We made a decision to give our worries and concerns to God. We just felt he was telling us to free ourselves of everything. That's how the title came about - and many of the songs speak to that - free of negativity, free of self-doubt, free of whatever it is that holds you back."

The best song on 'Free' is the tender acoustic guitar ballad "You Just Be You," which starts out telling it like it is: "In a world that seems so fake/Artificial everything/Oh, I just want to be real." The song talks about the world judging you and how it's easy to feel insecure. The chorus brings the lyrical payoff, though, when the ladies speak directly to the listener with the words "you just be you."

"You Just Be You" was inspired by Heather's own testimony of being teased for having lighter skin than her siblings. When she'd go home crying, her mom would say, "you just be you." "I had a difficult time growing up and I always used to question why I looked different from my sisters," says Heather. "But over the years, I realized through Christ that he made us the way we are for a purpose. We've got to love ourselves. After all, he loved us first."

"We've gone back to our roots, straight up singing his praises," says Ebony. "A lot of the songs (on 'Free') say you are free to worship, free to praise. Once you can be free of things that weigh you down, you are free to be yourself and worship God for who he is."

In a world where Madonna and Britney Spears kiss on MTV to shock and titillate, it's a blessing to see Virtue do their thing without all the bling bling.

We are so proud of you all, continue to allow God to use you. You have all been anointed from our heavenly Father to reach souls with the gift of music.One day soon we will all be singing on the streets of gold with Jesus, until then keep the faith. Much Love!!

I am a wife and mother of two wonderful children who are young adults now. When my children were a bit younger I wanted to find gospel music for them to listen to in their generation that was sincere and enouraging as we journey through our Christan live. Thank you Virtue for your music that reflects your love and insperation for CHRIST. My daughter is 21 and a senior in college and my son is 18 and a senior in high school and they both always love to sing. Today they still listen, play and sing gospel music boldly and my family still listen to your CDs all the time. Virtue if you guys are ever in indy to sing please let us know. We would love to come out to see you. Keep living and singing for CHRIST boldly. God Bless!

GOD BLESS YOU ALL.
Keep singing for the Lord.

You guys have inspired me so much. I love You all very much. I have all your albums up to free. May God continue to bless and keep you. GOD BE PRAISED!!!!!

u guys just seem to vanish or i don't come across ur works again.iam dying to get a copy of "Get Ready" but to know avail in these climes.any help how to get one?if u know how much i love u guys then u ought to reply this pls

Wow! I remember you guys from Ephesus and from Caffin Ave SDA. Its good to see some good stories from the N. O. i haven't heard form anyone else from those days @Ephesus.....

YOU GUYS GOD IS REAL AND EVERYWHERE. IT IS EXCELLENT.WE NEED TO REACH THE UNREACHED MAKE IT SOUND MORE AND MORE .HAVE AFULL GODS BLESSINGS

I hope you can come here in the Philippines specially in our place.
I would be glad to see you.
God bless you always..

hallo there! well all that i can say is that i love your music.i listened to one song today for the first time and it realy got deep inside.i would just like to say that :keep up the work of `god i know it is not easy but hey our `Lord Jesus overcame so can we.i Jesus Name

God Bless You all

For more on Virtue visit the Virtue artist profile