With a stunning new album and an ever-increasing amount of media interest, London's VISUAL MINISTRY CHOIR are beginning to see gospel music become a force to be reckoned with. Lins Honeyman reports. 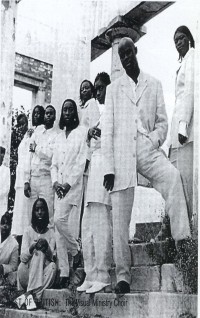 The British gospel music scene has seen something of a revival in recent times after a history of almost underground existence. Part of its current success is down to the work of the London-based gospel organization Visual Ministries. It all started eight years ago when the newly-formed promotion company organized the finale tour of the ground breaking Inspirational Choir. He recognized that there was going to be a need for future acts to demonstrate their talent and 'anointing'. Founder Junior Spence recall, "As one story was coming to an end, so another was about to begin."

With the vision of seeing gospel music firmly entrenched as a contemporary means of communicating the Gospel, Visual Ministries soon became recognized as an expert and significant player in the UK gospel scene. Realising the impact of the live gospel sound, Junior felt compelled to form a choir in 1996 as part of the organization. And so it was after, strenuous auditioning, the Visual Ministry Choir was formed, with 21 of the finest gospel voices in the country. "From the time we started, God has really given us favour" Junior reveals. "He has opened many doors for us to minister the Gospel and there have been so many places we've visited and people we've sung with." This is reflected in the choir's innumerable television appearances ranging from The Big Breakfast to the Royal Variety Performance, their collaborations with the likes of Marian Carey and Gloria Estefan and, perhaps most notably, their contribution to the million-selling Children In Need single "Perfect Day".

Junior is quick to qualify the reason for this astounding success: "It is remaining focused on the task God has given you to do. Everyone has an individual calling, a unique ministry. Our ministry is singing - not singing just for the sake of it but singing to spread the Gospel of Jesus Christ. Secondly, we believe in excellence. Excellence in how we present ourselves on stage and how we are vocally. Anointing is the number one thing but the anointing needs something to work with. I believe we are representing the Creator - the King of the universe. How we represent him is how people see God. I believe if we represent him well then people will see God in a different way."

With this aspiration for excellence in mind, Junior and the Visual Ministry Choir set about recording and releasing their debut album in 1998. Showcasing the versatility of the choir and the skills of premier gospel producer Nicky Brown, Visually Speaking' is a testimony to the quality of independent releases increasingly being seen in CCM. "It's a step of faith because we're not signed to any major label at the moment but we've managed to pull all our finances to get this project off the ground". Junior continues, "I really believe that anyone who puts their heart and mind to it and puts God first can accomplish this without just waiting around for a label to sign you." Already critically acclaimed, Junior is confident that Visually Speaking', together with the choir and Visual Ministries, will be used powerfully in spreading the Gospel: "We really want God to push the album as much as it can be pushed. We're looking for a distribution deal that will help it go much further afield."

Having completed a recent tour of Switzerland and with tours of Germany and Poland already lined up, the Visual Ministry Choir are beginning to see this dream turn into a reality. Countless television appearances have been pencilled in to an already busy schedule that sees the choir work towards maintaining a national platform for their music and ministry. Junior is matter of fact about the choirs presence amongst some of the biggest names in music and television: "Originally what happens is that when you do a good job, your name gets around and producers pass you on to other producers. They see you on TV and say I want to have this choir' That's why it's very important that gospel artistes portray an excellence in their attitude towards what they do. It opens up other doors for you to minister."

It seems the media is beginning to grasp the value and intent of those who work under the banner of gospel music, and Visual Ministries are dedicated to using this opportunity to help further the Kingdom of God throughout the nation. "I believe that one day gospel choirs will have to go full-time into the ministry God has given them to do, and I believe that day is coming soon."

Such is the dedication to answering God's call on their lives that, despite the added pressure for many of holding down day jobs, the members of the Visual Ministry Choir still have the ability to achieve a professionalism of the highest standard. This is an obvious encouragement to Junior who, with a view to seeing other gospel artistes reach similar levels of influence and success, has this to say to those who are starting out of: "I would like to encourage those who are in ministry, those who are soloists or in groups or choirs -I believe you have what it takes to take a step of faith in God. I also believe that God will honour your sacrifices. It takes determination, it takes faith. Faith is not reckless but it is risky."

For Junior Spence and Visual Ministries it is evident that these risks are paying off. With plans already afoot for a second album and the almost constant touring, television and performing schedules, Junior is certain that Visual Ministries will grow from strength to strength and continue to play an integral part in spreading the Gospel of Jesus
Christ. "The Bible says, 'Without vision the people perish' and I sincerely believe that if we stay true to the vision of what God has told us to do, we will see people's lives changed for good."