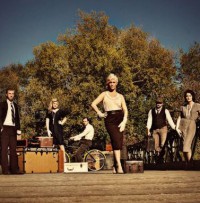 To British ears the name Warr Acres is an unusual one to affix to a praise and worship team though maybe a few Americans could tell you that it is a suburb of Oklahoma City. It happens to be the place where Victory Church is located and it is from that church that the worship collective Warr Acres emanate. Their recent album 'Future' has gained some enthusiastic reviews with the Cross Rhythms reviewer calling "a vibrant, interesting, modern album" and with its incorporation of some EDM-style rhythms into the pop rock formula it proves that this long established team of musicians and worship leaders are moving with the times.

The history of Warr Acres goes back to 2005 when they released their first independent album 'Unfold' under the name VMusic. A stream of projects followed - 2006's 'Resonation'; 2007's 'Wait' and its Spanish language version 'Displegar'; and 2009's 'Fixed On You' (Spanish 'Altisma Adoracion'). It was signing with LA's Dream Records in 2011 however which brought the talented team to national attention. The band's 'Warr Acres' album made 166 in Billboard's Hot 200 while the followup, 'Hope Will Rise', bettered that, reaching 118. The current lineup consists of Lael Ewing (nee Louthan) (keys, vocals), Aubrey Huffman (vocals), Chris Crow (keys, vocals), Oscar Ortiz (vocals) and Jaron Nix (guitar).

I asked Lael if she thought that 'Future' is the best one Warr Acres have recorded. She replied, "I do. I know it's easy to say that - any new project becomes your favourite - but I think what separates this one is we've really honed in on our sound, our message. It feels like everything fell into place, stronger than ever. I have been blown away by how the team came together and made it happen. I'm really excited for people to hear it. This album has a lot more strings production compared to our previous projects. I saw the contrast of those two albums and how they all came together. I thought, from start to finish, this album feels a bit more cohesive than previous projects, which had a bit more of an eclectic side to them."

'Future' was recorded in numerous locations. Explained Lael, "One of our main producers, Jaron Nix, has his own recording studio in Marlow, Oklahoma - about an hour and 20 minutes drive for us. His company is called Desperado. We enjoyed working with him out there. It was fun mixing it up this year; in the past we recorded at our church studio, the Loft, and at Black Watch Studios in Norman."

Lael explained the process of bringing new songs in the Warr Acres repertoire, "We write out of a sense of calling on our church. We listen to God, what he's wanting to say to our church during any given season. We'll write songs that go along with a sermon series our pastor's doing. Sometimes we'll collaborate on a song; sometimes we'll each have things we're working on and bring those to the team before we take it to the church. Every song has been sung in our church for a good length of time before it gets on an album. That does allow us to see which songs are congregation friendly, which ones people connect with. Sometimes songs are a hit from the moment we introduce it, sometimes we have to go back to the drawing board. That's a really good process for us before we can get to recording songs for the album because we already have a gauge on what can connect and be effective for people." 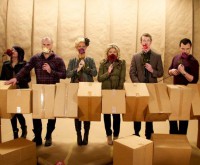 With such a talented team of songwriters it would be easy for Warr Acres to bombard their church with new songs but they are wise enough to recognise that God is still using some of their older material. Remembered Lael, "One we've done not so long ago is 'All I Am' off the 'Resonation' Vmusic CD. That, for sure, is a classic one for our church that people connect to. It immediately takes you into that place of worship; we enjoy bringing that one out."

Because of their regular worship duties at their church, there are few opportunities for Warr Acres to tour. However occasionally an opportunity comes up. Said Lael, "Back in November, a spur of the moment opportunity came available for us to go to Paris for a few days to help with a conference there. Our pastor and church were really supportive of us helping out over there. We even recorded one of our songs in French. That was an awesome experience. We take each opportunity case-by-case: if it can work out, great - we just always have that priority of making sure weekly worship is happening."

Gradually Warr Acres songs are reaching an international audience. Said Lael, "Aside from feeling called to write music for our home church, we feel like God will take our team and our church through a season with these songs; then when it comes to putting them on an album, we see that as our opportunity to send these songs out to the global Church. Hopefully these are going to minister to the global Church, and be something fresh, something God's leading for the Church at large. It is neat to see the emails or messages that come in from churches all over that will somehow hear about our songs and they'll let us know that they're doing them in their church. It's amazing to hear that. We got an email from New Zealand one time, and we're like, 'How does that happen?' We did some marketing and promotion, but not a ton because of our focus is here at home. In the day we live in, with social media and the internet, it's fun to see how far things can spread - which songs seem to connect. That's definitely part of our call, to resource and to build the global Church. We give away backing tracks and loops for all of our album songs because we want to do whatever we can to help any churches that do want to do our songs. We want to help make that possible for them."

The title track of 'Future' is particularly special to Warr Acres. Explained Lael, "Our church has gone through an interesting season over the last year, year and half. What makes the album as a whole more special and hit closer to home for all of us is because it almost wouldn't make sense for us to even put out a project on the heels of some of the things we've been walking through; but God has been so faithful. My favourite line of the whole album is, 'I may not know the future, but I know who holds it'. The first time we ever did the song live, and sang that line, the congregation just started cheering. It surprised me because the song is mellow and not one you're going to get excited about. It was evident that idea really hit home with people. I love what Chris and Jaron did with that one - the piano and strings then building into the programmed section."

Another impactful song on 'Future' is "Chains We Wore". Said Lael, "Oscar and Aubrey co-lead that one together on the album. The bridge of that song is my favourite because it's such a declaration of faith. 'In Jesus' name, the crippled will rise, the mute will sing out, the blind will see light, the thief belongs, and he makes us strong.' Singing that live as a church, it's always powerful. You can see people awakened to the power of Jesus, the power that we carry when we seek his name and pray in his name."