Wavorly: Mississippi rockers who are Conquering The Fear Of Flight

With a sound somewhere between Muse and Mae, a band from Tupelo, Mississippi overcame the temptation to call themselves Usa (think about it) and instead settle for Wavorly. Their album 'Conquering The Fear Of Flight', produced by Rob Graves and released on Audio Adrenaline's Flicker Records, is a powerfully passionate set of intelligent songs well worth investigating. The band's bassist Matt Lott told Jesus Freak how the band came together. "Dave [Stovall] and I met in college and formed Freshman 15. We had an old guitar player and drummer, they kinda went and did other things - which is cool, we're all still friends. [Ryan] Coon joined - he was our road manager when we were Freshman 15, and we really wanted keyboard and stuff. Dave had started writing a lot of the songs on a piano, and we thought we oughta do keyboard, so that opened up a whole new thing that we could do. So with the other guys leaving we added Seth [Farmer] on guitar first and then Jaime [Hayes] became our newest member. We decided to change the name to Wavorly because we figured - three new members, and our sound kind of went from a pop/punk thing to now just more of a rock [thing]. We like Wavorly better because it's just more of a mature sounding name. We didn't want to be 30 years old and be like, 'I'm in Freshman 15. I have three kids!"

To Christian Music Today Matt explained the origins of the band's name. "Wavorly comes from a mansion in West Point, Mississippi called Old Waverley. We changed up the spelling a bit, but we wanted a name that reflected where we were from. It just seemed a good fit with the music."

Part of their 'Conquering The Fear Of Flight' album was inspired by The Great Divorce, the allegorical novel by CS Lewis. Lott spoke about the influence from the Oxford man of letters. "The Great Divorce is just a book that both Dave and I loved. It has an incredible story, and the imagery of Heaven and Hell that Lewis uses paints a great picture of what the main character is going through. We wrote two songs based on the book: 'Part One' and 'Endless Day'. We'd like to think that the readers of the book would be able to recognise some of the descriptions in the song and how they relate to the story."

The first single from the album was "Praise And Adore". Said Dave Stovall, "When I sat down to write it I had no agenda. I wasn't trying to write a song with the meaning it has. I was really just trying to write a song from my heart to God. From the title 'Praise And Adore' and the way it's structured, it sounds like a praise song; however, the main point is not about praising God. It's about how people can go their whole lives without ever knowing true life and having an abundance of it. It was originally titled 'Some Live Without It'. Sometimes we don't realise that a lot of people exist outside of that bubble in a real world of hurt and despair. We should be thankful and praise God that we have the opportunity to live our lives with the hope that he has given us and strive to help others see that hope." 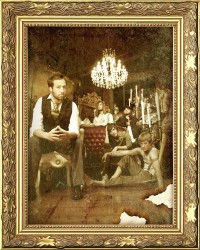 It was at a concert in Temecula, California that the impact on some fans of "Praise And Adore" really struck Dave. He remembered, "We started playing 'Praise And Adore' and there were like 3000 people there, probably one of the biggest shows we've had ever. We started singing 'Praise And Adore' which plays a lot on Air1 out here. And people just started yelling for it, and we're like 'What?!' We didn't even know people knew who we were. So we started playing and everyone was worshipping along with us. That was a pretty memorable moment, it was very humbling. So we get done and I walk off to the side of the stage. There's a lady and her daughter and she says, 'Hey, can I get your autograph or picture or whatever?' So I was like yeah. So I started talking to her, and she said she had a daughter that had got in a car wreck and died three weeks before then. She said they turned on the radio for some comfort and 'Praise And Adore' was playing. She said it comforted the whole family. I was speechless, I didn't know what to say."

Another standout song on the album is "Forgive And Forget". Said Lott, "Forgive And Forget' means a lot because I used to deal with a lot of jealousy and bitter feelings - like relationships that went bad and sinful habits I was falling back into. Thankfully, God helped me to understand that trust and peace is truly possible if you let go of the past and completely give it over to him. The song is about letting those things go, because they only rot away at you inside. Many of my most precious relationships have improved because of letting go of all of those things, focusing on the positive side of problems, and choosing to not let worry, jealousy, or doubt creep in and ruin things. God delivered me from being trapped in these things, and thankfully we got a song out of it too!"

Christian Music Today asked what distinguishes Wavorly from other new groups in an overcrowded rock band marketplace. Responded Lott, "We're not a band that advertises ourselves as some crazy, new thing that no one has ever heard of before. But we like to make rock music that has quality and meaning, as well as heaviness and melody. We just hope people like it. And we hope to project the hope that God has given us through Christ."