Having scored successful albums like 'Common Creed' and 'The Robe' and written for artists like Kim Hill and Amy Grant, WES KING has recently gone through a personal revolution. He spoke to Jan Willem Vink. 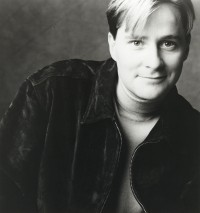 Ever since his "Snake In The Grass" duet with Kim Hill, Nashville aficionados have recognised Wes King as a true songwriting talent. When Wes' first album was released in 1990, the publicists were dubbing his music "acoustic groove". Since then the accomplished singer/songwriter has penned a series of finely crafted songs like "The Love Of Christ", "The Robe" and "Common Creed". But now the 31-year-old singer/songwriter has taken a step away from the hype and glitter from the CCM world and his new album 'A Room Full Of Stories' is his most personal. I spoke to him at Nashville's GMA Week.

Jan Willem: How did the changes evident on 'A Room Full Of Stories' come about?

Wes: "I think just adversity, going through a lot of personal, business and even spiritual struggles. I had to cry out, ask some questions and wrestle with them. Sometimes I'm convinced that's exactly what the Lord wants, he wants you to ask questions and wrestle. A deceiving thing that can happen in Christian circles is when people say, 'You don't question God.' He invites you to come and wrestle with him so he can overcome you. In the midst of my questioning, one of the things that was revealed to me is that my life is a story that he is writing. That's why I called the album 'A Room Full Of Stories'. It was more like publishing a journal than making a record. For me, art, if it's not honest, ends up more like a commercial or propaganda."

Jan Willem: Would you label some of your former records propaganda, then?

Wes: (After a long pause) "No. But I think if we're not careful when we do Christian music, we feel the pressure of I've got to have a strong message in there.' There's obviously nothing wrong with that, I still perform songs from my earlier albums. I think those songs were a reflection of my theological journey, me solidifying my biblical and theological foundation. They proclaim exactly how I see the world as a Christian and as an artist. But I think this album reflects more how the theology has made its way in to my heart. And for that I'm real thankful."

Jan Willem: After you recorded 'Common Creed' you left your record company, booking agent and manager, and sort of started all over again. What made you do this?

Wes: "There was a difference in opinion as to direction. I was frustrated with a lot of things, even myself. I was as frustrated with myself as I was with what is happening in Christian music. And I needed to cut with the management, to kind of just simplify. My expectations were too high. I thought I was in over my head in a lot of ways. I wanted to cut back and pour my life into my wife, into my church and into my songwriting, so that I could really go out and give to other people instead of reluctantly, resentfully going out and having to do concerts, but do it because I love it. At the time I was very, very close to quitting. I took a study trip to Israel and started to think, what's my ministry, am I still going to do this? There comes a moment in our lives when we need to think through key words that we throw around, words like 'ministry' and 'art' and 'entertainment'. I started doing that. Part of the call of an artist since the beginning of time has been to stay relevant without succumbing to the wants of a fickle audience. There's a real fine line there. If I'm not careful, what I could do is put my finger up in the wind and see what's the most palatable type format and the most palatable kind of thing to say, just so that I can sell records. Then it stops being art and it definitely stops being ministry because it's becoming little three-minute commercials for the career of Wes King so Wes King can sell records. So do I want to sell records? Yes, that's why I'm here. We spent a lot of money on 'A Room Full Of Stories' and on promotion. I spent a lot of my heart, pouring into this record. Yes, I want to sell it. But I don't want to be greedy. If I make the money we spend on the record and make a little bit more so the money feels it's worth the investment, and I can pay for my house and pay my bills, really that's all I want. I'm a little bit afraid of more, because it seems success can be such a killer of creativity. If an artist doesn't have a heightened sense of sight, sense, taste, smell and feel, he's not going to have anything to write about, because that's what it takes to write music, to be an artist. So to get back to your question, I definitely questioned that, because I wondered whether this format was even relevant. I had to ask myself that question: 'Is this really relevant in the lives of average people, in the lives of church goers? I came to the point where I could pursue the excellence on an artistic level and also pursue my theological foundation and biblical worldview. I think, as long as I'm doing those two things, I will be relevant."

Jan Willem: When you were pondering whether to leave CCM or not, what were the major factors in the decision-making process?

Wes: "Michael Card was a big influence on me. Mike had once come to a similar point too. I said to him, 'I think there is too much music right now.' I looked at a lot of stuff that is doing really well and selling really well but I didn't like it. It was, 'I don't get this'. If this is what sells and this is what the people that buy the majority of Christian music like, why am I wasting my time and my heart and giving it to people? Because some kid that's imitating some secular artist, and somebody else is writing his songs and they get out there selling more records than me and I'm going to have to open for him. As a man and as an artist, that was really difficult for me. But I came to realise that that was no reason for me to quit. A perceived lack of success or indeed success is not the issue. I came to realise that I definitely felt called in my life to do this. Our heart beats without us being conscious of it. It never stops beating. And for me there is a heartbeat in me that makes me do music. It's really something that I can't totally explain. I know that I love Jesus, I want to be his friend and please him and I do this music primarily for him. And I hope that it ends up doing what art should do and that I as a Christian do what he wants me to do."

Jan Willem: Was this what led you to the point where you were able to write and record a song about childlessness, 'You Should Have Been Here By Now'?

Wes: "Yes. Definitely. That was one of the last songs I wrote. I wrote a song called 'Grace' and a song called 'The Magnificent Defeat', which to me were brutally honest. I thought this record is really personal. When that song came about, I didn't write it for the record, I wrote it for my wife and I. As Leland Reikland said, art can be a lot of different things. One of the things he feels is a very good use of art is when art puts our pain at a little bit of a distance. It can put it in a form that helps us deal with it a little better. Art can help us to prolong joy. That was a goal for my wife and I when we wrote that song. I wanted to express all the questions that we had and all the joy we had and all the pain we had...to help us. I never intended for anyone to hear that song but me and her and maybe family. But John Mays begged me to put in on the record. I said, 'I'll think about it.' I tried it at a concert in North Carolina, and in 10 years of doing concerts I never had a response like that. It was an audience that was with me, it was a fun audience, they were on the edge of their seats, paying attention to everything that I was doing. And very enthusiastic. When I did that song, there was just dead silence. I went, 'Thankyou.' Nothing. And then I started hearing sniffles in the audience. It was very dramatic. Afterwards the comments that were made to me by people in the audience made me realise that it would have been selfish for me to have kept 'You Should Have Been Here By Now' for me and my wife. That's kind of what made me put it on the album."

Jan Willem: I hear there's an interesting next chapter in the sense that your wife is expecting twins...

Wes: "Yes. Yes! (laughs) We went ahead and put this song on. We were submitted to the fact that maybe we were going to adopt. Then right after the album came out, I was doing 'phoners' for this record and my wife called and said, 'I've got some news for you.' 'What?' I said. She said, 'I'm pregnant.' It was unbelievable! I barely could finish that day! But it doesn't always end happy like that for people. I'm very sensitive to that. I'm thankful and elated. We only tried for three years and it seemed like an eternity. Some people have tried for 16 years and are still praying... There are people out there that will never have children of their own. I don't want to pretend that this is a little nice formula that if you just pray and believe or do these little formulae's then God will give you a child."

Jan Willem: Can you comment on some other songs on the album, eg, "Universe Next Door"?