Wilshire: The US husband and wife duo

They had an exceptional track on the Cross Rhythms Experience an issue or two back. Now Tony Cummings gives the lowdown on America's latest husband and wife duo WILSHIRE. 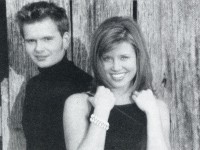 American CCM has produced some haunting-voiced ladies down the years. Susan Ashton, Sixpence's Lee Bingham and Out Of The Grey's Christine Dente all have the kind of goose-pimple-inducing vocal chords which can caress every ounce of pathos out of a melody. Now to that list we must add the name Lori Wilshire, who, with husband Micah, is half of Wilshire. the husband and wife duo now toting their debut album for Michael W Smith's Rocketown Records. What motivated a pop veteran like Smith to take on launching 'unknowns' like Wilshire.

The answer is simple, according to Smith: "Awesome talent! They are just so gifted, and have such great hearts and deep convictions. I knew right away we had to provide a way for them to have a larger artistic platform. So we asked them to be part of the new label.

It was Smith who plucked the two out of obscurity and asked them to join band for the 'I'll Lead You Home' tour. And yes. Micah and Lori will be touring with Smith this autumn in addition to being his opening act. But the Wilshire's relationship with Smith runs much deeper than even he can imagine. It was the mid '80s when 16-year old Micah first desired to play guitar by watching the then shaggy-haired, permed Smith croon on a music video with veteran axe session man Chris Ridriguez strumming along in the background. Meanwhile, back in Houston, 11- year old Lori played Smith's 'Project', a gift from her aunt, on her tape player over and over again while jumping outside on her trampoline, memorizing every lyric.

All of which makes it strange for this couple to hear that Smith credits Wilshire as one of the reasons for starting his own record label. "It's very very humbling," Micah says, of working with his former music idol. "It's so weird that we get to work with Michael because we both grew up listening to him," Lori explains.

But Smith's influence and assistance notwithstanding, Micah and Lori have waited their share of tables - the proverbial musician's job - and paid their share of dues. After one semester of college, Micah left Virginia for Nashville, waiting tables to pay the bills while establishing himself as a session singer. His first big break, working with DC Talk on the 'Free At Last' album, opened the door for the opportunity to work with Lori. Meanwhile Lori, who was studying voice at Nashville's Belmont University, was working on an artist development deal with Reunion Records. Reunion called in Micah to sing background vocals on her demos, and they married a year later in October 1995.Lori admits it was love at first sight: "We tried to play it off that we weren't interested, but we were."

They soon went from husband and wife to bandmates, playing coffee houses and clubs, singing covers. Then they left for the 'I'll Lead You Home' tour. "We spent our first year of marriage on the road on a bus with a bunch of guys. We thought it would be bliss, having all of this time together," "But it was interesting, it was hard.

Yet their voices still brim with the hopefull giddiness of newlyweds. "I think writing from a young married couple's point of view is unique. None of our songs are about jaded love - yet." Micah says, laughing. "We may be throwing things at each other on the next record." Lori pipes in. "But there's a happy vibe to this record from being newlyweds."

With influences ranging from CS Lewis to The Beatles to Shawn Colvin, Wilshire's lyrics speak of what Micah terms 'life perspectives'. "My Dad always taught me that music is art", Micah says. I was talking to Larry Norman one time, how if every painter who was a Christian painted a picture of a cross every time, what good would that do? I think we need to write about life issues, just like anyone else might write about, but from a Christian point of view." Yet, even though their lyrics may not broadcast their faith, the Wilshire's are committed to illuminating truth in all that they say and do. Lori says, "Something we've been learning lately is that everything God has given us is not our own - the little materialistic things he gives us, our minds, our bodies, our talent - it's ail lent to us by God. It's a big responsibility and one we hope to uphold."

As much as they love to talk about the process of writing and the "great fun" of making records, they also love to listen. They're just as inclined to bend your ear about a redemptive conversation they just had with a waitress who poured out her painful story over burger and fries. And that's exactly why they accepted the invitation to join Rocketown. As Lori explains, "We were talking to several other companies, including mainstream labels. But after we thought and prayed about it, we realised that what we really wanted to do was write and sing about the things that really mattered to us, from a Christian worldview. And we weren't sure we'd be able to be upfront about our faith if we went with a mainstream company."

"We finally realised Rocketown was the perfect opportunity, like God opening a door for us." says Micah. "We both grew up listening Michael's music, so just getting to play with his band was a huge thrill. The fact that we're recording our own music for his record company is an unbelievable blessing."

Besides their mutual commitment to the Christian faith, Micah and Lori share a wide variety of musical tastes. Both credit their families for encouraging their exposure to a wealth of music, from Motown to Mozart - and Bach to Beatles. "My Dad is a pastor now, but he was in a rock'n'roll band in the 70s," says Micah. Growing up in Houston, Texas Lori developed such a love for music that she eventually majored in voice at Nashville's Belmont University.

Later this year Wilshire hit the road again when their infectious pop stylings and contagious joyful attitudes will will be featured in a performance slot on Michael W Smith's 1998 tour. "I'm their biggest fan", says Smitty. "I can't wait for everyone else to see and hear what we've known at Rocketown from the beginning. that Wilshire's got what it takes - phenomenal talent, commitment and an honest desire to serve God."

For more on Wilshire visit the Wilshire artist profile