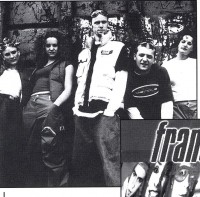 "Frantik"
The track began when I got together with Justin Thomas (ex HOG and regular WWMT lyric writer) to start work on writing some new material'. We talked about getting something mega hyper to replace "Jumping" in the Tribe's live set. We put in a rough groove and he quickly wrote a bunch of lyrics, which I then started to build a track around. We actually completed two versions of this one, the first I thought sounded too much like "Lift" off 'Jumping III' so I started again using this '60s piano and Hammond riff as the basis which I think was much better in the end. - Zarc

'Truth"
Cam had been working on a demo for "Truth" and it was one'of those tracks which kept evolving over time. Cam came in with his original ideas and wrote the raps over a basic drum groove. We then added the chorus with Doronda and put a James Bond style chord sequence under it which gave it a bit of extra character. - Zarc

"Got To Be With You"
This track, "I'll Be There" and "Joy Dayz" were all recorded in an intensive period in June, during which we were also working on two other tracks that didn't make it, including a rap version of Chaka Khan's "Ain't Nobody" for which we completed, but couldn't get publishing clearance in time. "Got To Be With You" is a track of Doug Walker's and was a real chance to let Deronda do her diva thing again. It was a little tricky not to let it.sound too dated, as there is not too much song-based dance material in the charts at the moment, but I think it turned out reasonably well. - Matt

"Eat The Word"
Doug Walker was largely responsible for "Eat The Word". He had actually written the original track a few years ago after listening to an old Tribe track called "We Talk To The Lord". The band heard it and liked it and we decided to work on it further. Cam had also worked on the original backing so it was just a case of moving it all up a gear and adding the middle eight sung section to make it sound more complete. - Zarc

"I'll Be There"
It's a little tragic that the song is only half of the song we recorded. We used a verse from another song, but again couldn't get clearance as one of the writers was somewhere unknown in South America, so at the last minute the middle of the song was quite literally chopped out, which is a real shame as the track was storming, and now sounds a bit odd. The original idea was Cam's, and the sound of the track is one of the closest to the 'Heatseeker1 stuff. There is a lot of weird filtering stuff going on with the vocals and beats, and Deronda's vocal (what is left of it) is actually the original guide vocal. It sounded so good that we just left it in. - Matt

"Girl Of God"
This was largely Emma's idea. She has quickly become an extremely talented lyric writer and she came in with all the raps complete. We then worked on a chorus which we added in but it still seemed a bit unfinished. Doronda had also written a chorus for the track which we actually adapted into the bridge section in the end, this helped to complete the track. -Zarc

"Love Is The Greatest"
A song written by Cam, Deronda and B Doll, the hook goes, "Love, love is the greatest/Love is what we pray each and every day/Love, love is contagious." Hopefully the track is contagious. Matt and Cam did the programming and we all took a hand in the production. - Zarc

"Message Of Love"
This was an Arthur Baker track from about 10 years ago. It was Cam's idea to cover this and he came into the studio with a rough idea mapped out. It was initially quite difficult to see either of these tracks as obvious Tribe material, but things gradually fell into place. I decided to use guitar quite prominently on both tracks, and used Dave Williams, a local session player who's worked on a fair bit of well known stuff. We kept a quite loose "streety" sound with quite a few loops and snippets interacting and a fairly raw, up front vocal from Deronda. - Matt

"Joy Dayz"
"Joy Dayz" was one of those tracks that just happened the way you wish every song would. Whilst we were working on another track, Tim heard a guitar loop and said that it would be ideal to write a summery tune to, so we quickly put a couple of ideas down for reference. When we came back to it a couple of weeks later, Tim and Emma's raps came within an hour or so, and by the end of the day, most of the music was in place as well. Deronda put the vocals down a couple of days later, and Dave Woodman added some guitar samples. Whilst the party track idea has been done many times before, the track has a really nice feel to it that really captures the lyric. If you listen carefully to the background noise you can hear Emma asking if we're recording yet, and Deronda talking about her bra for some unknown reason! - Matt

"I Give You My Life"
Unlike "Love Is The Greatest", this song needed to be quite clean and well produced, but not so much that it wasn't a Tribe track any more. Initially this was a duet with Doug Walker, who wrote the song, but it sounded a little too off the track for the Tribe (although Doug's vocal was great). - Matt