The WORLD WIDE MESSAGE TRIBE are rapidly becoming the most popular contemporary Christian group in Europe. Dave Drodge went to meet the aggregation who've brought dance to Christian consciousness and the gospel to the schools of Manchester. 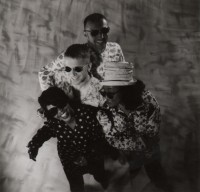 Schools Work
It's another week in the life of the WORLD WIDE MESSAGE TRIBE. They stick to their tried and tested plan: Andy Hawthorne, Mark Pennells Jnr and Sani are in a Manchester school taking the RE classes for the whole week. At the end the school are then invited to a Friday night concert with the full Tribe, including Elaine Hanley, Zarc Porter, Max and four dancers (the general public are NOT allowed in!). This cycle of events repeats itself seemingly endlessly and takes up the majority of the Tribe's time and energy. Having said that though, the Friday I visit them there is also to be a Saturday sponsored walk in aid of Message To Schools, ending with a free live outdoor concert, and on the Sunday evening a Planet Life worship event, which, this time round, involves all the members of the band. You've got to be tough to be in the Tribe!

I watch the band teach a class of about 40 teenagers in the school hall from Year 8. First they play a few songs and then have a light-hearted Bible quiz, both of which go down well and serve to get everyone feeling relaxed and at home. Then Mark and Andy take turns to preach, whilst Sani sits by the OHP and writes notes on what is being said. The talk is about "Three Reasons People Give Why Jesus Didn't Rise From The Dead".

The first reason: "Maybe Jesus just fainted on the cross" is countered by Andy who explains that when Jesus had a spear stuck in his side, blood and water came out, which meant that his blood and plasma had begun to separate. Therefore, he had been dead for a while.

The second reason: "Maybe the disciples stole the body from the tomb" is dealt with by Mark's answer to this in that it would not only have been extremely difficult, but many people claimed to see Jesus after his resurrection and suffered hardships, torture and death for that fact.

The third: "Maybe they just saw a hallucination." Andy says that if he told them that he could see a pink elephant in the corner, they would think he was mad, and certainly wouldn't see the same thing. In the same way, a mass hallucination of Jesus raised would have been impossible.

The talk transparently gets the kids thinking. The pupils are now split into pairs and are asked to think of questions to ask the Tribe about Christianity. A short girl at the front asks, "If God made the world and everything, who made God?" to which Sani replies, "God created time, and he's outside time. He goes on and on, like a big circle." A boy near the back then asks, "So what has God done for you?" to which Mark, Andy and Sani basically say, "Loads and loads!" The lesson has to finish there, as other children start to come in for their lunch.

When the Tribe arrive back at the school at seven o'clock to rehearse, the stage is already set up, thanks to the army of helpers, and almost straight away, the band launch into a practice of "We Talk To The Lord", a track from the new album that they have not done publicly before. Then there is a short prayer time and the band go off to change into their zany stage gear. The counsellors meet to discuss events and pray some more, and before one knows it, the hall is full. About 150 kids have turned up, which is good (it's only a small school) and a DC Talk video starts to play on the huge projector screen.

At eight o'clock Max (who plays guitar for the albums) comes on stage and does a few numbers to warm up the already excited crowd. Then after he speaks briefly about God, "Maximum Level" starts playing, accompanied with vox pop from kids at the school (which everyone finds extremely funny!). Smoke machines fill the stage to a classical piece. The volume increases and the band appear.

They kick off with "Alleluia", by which time most of the kids are on their chairs dancing. A couple of songs later, Mark teaches everyone a wacky Turkish dance to go along with "One". They love it!

An hour later the pace slows somewhat with "We Take The Blame", shown with a disturbingly fitting video. Then Andy explains the song in detail and preaches the Gospel. This leads to "The Cross", again with a video, and kids who want to become Christians are asked to go into the classroom next door. All over the hall young people push forward to reach the classroom. Inside counsellors and some of the band members talk intently to the kids. Then they pray. Afterwards Andy tells me about 30 kids have made commitments. "But it always makes me feel almost depressed to see all those that didn't," he remarks.

Video Ministry
One of the aspects of the World Wide Message Tribe's work that many will not be aware of is the 'Get God' video. This video was produced last year by Message To Schools in order to help churches holding Planet Life services for those involved in school missions to train new Christians in the basics of the faith.

'Get God' consists of six 15-minute sermons from Andy, with vox pops and a testimony used to break it all up. It is intended that one session will be shown per week, followed by activities from an accompanying book, which also gives notes to leaders on how to use the video. For a privately financed video it is very good, but the even better news is that Alliance have commissioned a remake for both the video and the book for general release. Both should be on the shelves by the end of August.

We Don't Get What We Deserve
The Tribe's third official album (not counting the private releases or 'Jumping In The House Of God') is out towards the end of August and is yet another big step forward for the band. "The aims of the album," as Andy explains, "were to move on from 'Dance Planet', to be hard hitting lyrically and quite experimental musically but above all to produce songs that school kids find relevant today and can sing along to." It is no exaggeration to say that it will make an even bigger impact than any of their previous releases. The Tribe are certainly very happy with it.

Intrigued by the title of the album (no, it isn't a subtle plea for greater finance), I asked Andy exactly where it came from. "We heard it in a message from Bill Hogg - the head of Youth For Christ in Scotland. He said that we don't get what we deserve to get in return for our sins. We get God's grace instead!" Of the title track, an acid jazz-tinged number, Andy says, "We wanted to do something original, something that people hadn't heard us do before. But you're gonna need a concordance if you want to understand some of the lyrics!"