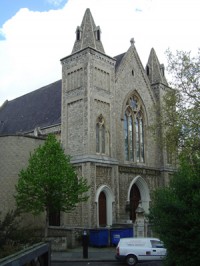 The idea of a series of albums featuring worship recorded live in churches does not, even for avid followers of worship music, sound like a potentially riveting musical experience. Too often in the past, the phrase 'live worship' means either the kind of stentorian hymns and songs of praise which are still a regular part of much of this nation's church life and religious broadcasting. Or it means recorded-in-a-tent-at-a-Bible-week music which for all the sales hype about 'capturing the atmosphere' usually is an experience of Blackwall Tunnel sound where highly enthusiastic but musically ragged congregations sing Kendrick, Vineyard and Hosanna to an accompaniment of badly balanced band and out-of-time tambourines. But whatever one's past experiences of below par live worship recordings, all this fades into the past when one examines the first three, CDs released by Kingsway under the series/label indent Worshipping Churches. The first three 'Stand' by the Christian City Church, Sydney (reviewed in CR8), 'Making War In The Heavenlies' by the Bethel Chapel, Nashville and 'Our God Is Good' by the Kensington Temple, England (both reviewed this issue), are now out and selling well. Further albums already in the pipeline are David Wilkerson's church in New York, the Rhema Church in South Africa and the Oslo Christian Centre. There's even some talk of doing a recording at a church in a black South African township.

Mastermind behind the concept is Kingsway Music's Nigel Coltman. "We have recognised for a while that it was in local churches, not necessarily the Bible weeks or the professional worship songwriters, that God is doing some of the most exciting things. I began to think of a series, a truly international series, which would reflect the huge cultural diversification that can exist within churches yet where the Holy Spirit still chooses to bless and empower."

Nigel is the first to admit that there are many churches where God is doing tremendous things but which simply don't at the moment have sufficient musical skills to make recording a viable possibility. But there are others, though a minority at present where there are within the worship bands, leaders, songwriters and singers, men and women of the highest musical standing.. "What we're offering the Christian public in The Worshipping Churches series are fellowships from the four corners of the globe that have (a) a sense of the powerful anointing of God, (b) a high degree of musical proficiency in the musicians and singers leading worship and (c) a recording that indicates the highest possible recording and production standards. The latter is important. For instance, recently we had to reject a Rhema church recording simply because the sound quality wasn't up to standard."

It's an undeniable fact for the first three albums in this Rolls-Royce-of-praise series the churches involved are each relying fairly heavily on vocalists and/or songwriters who are not exactly languishing in local church obscurity. For example, featured on The Christian City Church recording is well known Australian vocalist Chris Pringle; the Bethat Chapel, being based in Nashville, have a large number of professional CCM artists in their congregation (including Petra's John Schlitt and Morgan Cryyer) and a songwriter George Searcy who in 'Making War In The Heavenlies' has written one of the seminal praise choruses of the 90s; while London's Kensington Temple has a welter of pop and gospel singers in their congregation and a worship leader, David Grant better, who is known as a soul star. The Kensington Temple album is probably the most gripping of a high quality series. Kensington Temple is fast becoming one of THE religious phenomenons of the 90s. Recently the subject of a BBC television documentary this church has seen spectacular growth and now has to run six services on a Sunday to cram everyone in. Kensington Temple's Chris Cartwright, who with David Grant led the worship in June this year when the album was recorded, spoke about the Worshipping Churches recording experience. He reacted strongly to the suggestion that Kensington Temple had simply drafted in professional singers to give their recording polish. "David Grant and his wife Carrie are very much part of the ministry at Kensington Temple,' Chris told Cross Rhythms. "David has been leading worship at some services for about a year now. Nanette Welmans worships here. Lawrence Johnson (the ex LCGC singer now with Nu Colours) is only loosely connected with Kensington Temple. But on the whole the vast majority of the singers and musicians on the recording come to this church." One of the most intriguing aspects of the Kensington Temple is its extremely multi-racial congregations and the worship has more than a trace of black gospel in its sound. Comments Chris, 'There are a hundred different nationalities represented in the church so our musical mix is pretty unique. But we do have the Kensington Temple Gospel Choir so clearly black gospel does have a-strong influence in all our worship. What is encouraging is that we're seeing a harmony of musical styles. Unity in black and white music is a weekly reality."

Chris Cartwright's own composition, "From Your Throne O Lord", is one of the outstanding songs on the album, standing up well alongside Graham Kendrick, Kevin Prosch, Chris Bowater and...er... Van Morrison. Cross Rhythms asked what he felt was the aim of the 'Our God Is Good' album. "We wanted an album which reflected the diversity in the church but wasn't gimmicky. We wanted to make an all encompassing statement about what God has done through worship in the life of the church - a fresh sound representative of the creativity in the church but one familiar enough in terms of what people's expectations of worship music are that they wouldn't be alienated. A little bit more radical, certainly in terms of one of the heaviest drum sounds ever heard on a worship album is 'Stand' by the Christian City Church, Australia.

Christian City Church began in Easter 1980 with 112 people meeting for a Bible study. Today it's another bursting-at-the-seams fellowship with several spinoffs including a television ministry and a Bible college. The pastor of the church and composer of a number of the songs recorded on the almost 'rock praise' celebration is Phil Pringle, whose wife Chris recorded several CCM albums and toured the UK in the mid 80s. Cross Rhythms asked Phil whether his ministry was totally oriented to the cult of youth. "Not at all. Between 15 and 20 percent of our congregation are 40 and over. The reason we have used current, pumped up music in our praise is that today this is what appeals to the most people. It's so important to be communicating to each new generation and be prepared to move as God moves."

Does this mean that the Christian City Church is prepared to adopt new modes of worship even though the current ones are popular? Definitely. The people need fresh manna every day, they can't live on yesterday's food. We have regular re-evaluations here in the church of what we're doing and will move as we sense God is moving."

'Stand' was recorded in 1990. In Australia Christian City Church have already made a follow-up recording. "The album 'Stand' is representative of our Sunday morning worship", explained Phil Pringle. "Our evening service is more geared towards youth so we've done an album 'War' which represents the more rocky, pumped up kind of praise music. Considering the pop rock edge of 'Stand' (which includes an intriguing though, it has to be said, decidedly naff rap-praise song 'Dance, Dance"), City Church's 'more rocky' approach on their new recording sounds like it's going to raise an eyebrow or two.

Of the three initial 'Worshipping Churches' releases probably the closest to the sound and spirit of the Hosanna/ Vineyard worship axis is 'Making War In The Heavenlies' by the Bethel Chapel, Nashville. With a current membership of 'less than 1,000' situated as it is in the cradle of the contemporary Christian music industry it has every worship leader's dream - dozens of quality, professional singers and musicians in its congregation. "I would say about a third of the musicians and singers involved in the worship at Bethel are fulltime, professional musicians", George Searcy told Cross Rhythms. George has found international recognition as a composer of worship songs, his' Making War In The Heavenlies' being recognised by one and all as a classic spiritual warfare anthem. The original recording of the same, recorded in October 1989, is on the Worshipping Churches album. After studying classical music George joined Bethel Chapel in 1987 immediately forming a deep relationship with worship leader John Chisum with whom he's written many songs. He came to write "Making War In The Heavenlies" after a Bethel prayer meeting. "We were praying for our city and suddenly I saw in my Spirit a glimpse of the strongholds we as Christians are battling against."

But how are Christians without a particular revelation from God able to get beyond shallow evangelical sloganeering and begin to catch glimpses of the invisible spiritual realm. "We can begin by reading the newspapers. The Evil One is active in each of our locales. If we are to begin to be effective in our prayer and praise we must learn a little of the Enemy's activities and strategies."

Like Christian City Church, Bethel Chapel has already moved on to its next live recording. This one is called 'The Glory Of The Lord' and by all accounts is even better than 'Making War In The Heavenlies'. George Searcy is adamant that the new wave of praise and worship music is not trying to be 'the new Vineyard' or 'the new Hosanna'. "I have a lot of respect for what Hosanna and Maranatha are doing. They're bringing some wonderful songs to the body of believers. We need to be praying for the folk in those ministries, that they won't compromise but stand against temptation. I understand the stylistic parameters within which Hosannna and Maranatha work. Clearly they know their market. But if you listen just to those kind of tapes all the time it will get tedious after a while.

"With grassroots tapes it can be quite different - there can be a spontaneity and an innovation in a Church's tape it would be hard for a Hosanna or a Maranatha to capture.. Now when I say grassroots I don't mean badly recorded or badly played. But when the music is good there's a freedom and a Holy Spirit in local churches worshipping God with everything they've got which can really bless those buying the tapes. And that's very, very exciting."

I am searching for a copy of the 1990 RHEMA Bible Church Thanks Be to God cassette or audio files. If there is ANY way I could get in contact with they songs please let me know. or another source to contact. I appreciate any help
Thank You,
MercyRose

I am a fervent lover of your music far back as in the early 90's. Your music often lift up my spirit when i listened to them.
My favorite was the album that has "Let your Living water flow over my soul" I used to have it but got damaged. Please I am really missing it How can i Get another one?