YFriday: Children of the Revolution

About to undertake the Revolution Tour, Ken Riley, the frontman of Newcastle's YFRIDAY, spoke about his band's new album and his passion for radical Christian faith. Tony Cummings reports. 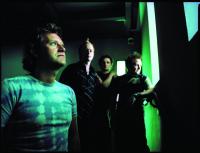 Yfriday have come a long way since Cross Rhythms first spoke to them in 1999. Then they were the house band for the Yfriday event run by Tyneside Youth For Christ. Things began to take off for the group with Kingsway picking up their debut album 'Rainmaker'. A tour with Noel Richards brought them to national attention and clearly demonstrated that lead singer and songwriter Ken Riley was one of an exciting new breed of rock worship leaders. In 2001 bassist Danny Smith joined the band and with the release of the 'Open' album Yfriday took the giant step of going full time. Now with the release by Survivor Records of 'Revolution', the band are heading up a major British tour with thebandwithnoname and Steve in tow. I began by asking Ken how the experience of recording 'Revolution' differed from their earlier projects. "The process was great," he responded. "Not only because we were working with a familiar team - Neil Costello and Peter Lozinski - but the difference being full time musicians makes to your ability and focus is amazing. The album's come out great because we can actually play!"

The sound of the album gives off a gritty, very British live rock vibe rather than the cleaned up polished rock of many American albums. Ken commented, "Thank you for saying it's British, that's exactly who we are and what we do. In terms of sounding British and getting success in the US, bands like Coldplay and Radiohead have done amazingly over there, so who knows? The album was recorded using Pro Tools, only what we went for is to capture the heart of the band. This is no clean, heartless, edited-to-death album. It breathes life, captures performances, captures the feel and vibe of our spirits and we really love it. All I can tell you is the albums that I love and have longevity are the ones that are real and gimmick free and somehow convey the spirit of the people playing. The likes of U2 or the Chilli's are fine examples of great bands who hold stadiums in their hands because they deliver what they recorded live, and if you see Yfriday live that's what you'll hear. I think the tide has turned for bands using loops and stuff, we could easily have gone down that route. But I really feel it's dated and people want to see real people playing real music. I guess that's just the backlash to the whole manufactured artist thing."

Ken spoke about some of the lyrical themes of 'Revolution'. "The title track is where we are as a band. The idea started when we were in Toronto and I started to linger on the word Revolution. I wrote the melody and chords at Spring Harvest 2002 but didn't really finish the song 'till much later. We're finding that the song just connects instantly with people and everywhere it's played people scream and get fired up as they get it! 'Rise' is possibly the hardest hitting song lyrically. When I refer to 'love is the drug I'm dealing', some may feel that culturally it is a difficult comparison. The whole song is about making a difference for God and I tried to make it accessible to non- Christians by using imagery they would readily understand. It is well out there as a lyric - totally dropped into my head by God by the way - and hopefully it makes us stop and think about what that actually means. I want people to get to know this amazing love that surrounds and resonates me, I want to tell the world about Jesus and what a difference he's made in my life, I want to be a dealer of positivity to people, to be a Samaritan, to be a melody in the noise of life, to be a catalyst to their finding faith, to be Jesus to them in deed and not just words - that's what this song is about."

Another standout on the album is "Someone I Can Live For". "To be able to sing to God that he is someone to live or die for is extraordinarily challenging. There are martyrs daily around the world, so it's comparatively easy to be a Christian in the West. We get to die to self which will lead to the death of injustice, poverty, abuse - all those things." 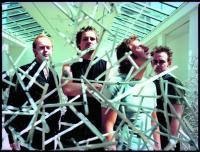 To the suggestion that 'Revoultion' is a move away from their praise and worship focus, Ken was adamant that that is not so. "It's worship to me. Every song is vertical, every song's sung to God telling him how amazing he is, or they're about what he's done for us. If you mean that it's loud and it captures a band in full swing so the style is different to what we've had before, then I accept that, but then we get into the whole what's worship thing. 'Lift' is possibly the purest worship song on the album. The chorus was written spontaneously on stage in front of 20,000 people in Singapore. We were there with Steve Hill from Pensacola and played three nights. Darlene Zschech had played three nights before us, so it took me loads of bottle to actually sing into the unknown. I love the song."

Ken had some interesting perspectives about the zealous marketing of praise and worship music. "The marketing of worship is an interesting subject. We've got our share of worship stars in this country, but as people they are all great - the bigger the name, the nicer and more grounded the person. We meet loads of bands when we travel overseas - it's amazing how some wear the shades and the swagger - shoot me if I ever do that won't you? Marketing is necessary for musicians to make a living - the same as speakers or churches. I think there are possibly more personality cults built around some speakers and churches, but I guess the ideal is no superstars please, we've already got Jesus right?"

One of the surprising additions to the Yfriday musical armoury on 'Revolution' is the inclusion of some full blooded gospel sistahs. "Man those girls can sing. Michele John, Carla Hales and Tracey Riggan, they're all black, beautiful, talented and in love with Jesus. Michelle sings with and coaches Miss Dynamite as well as touring with many other huge artists like Bryan Ferry. Carla was runner up in GMTV's Gospel Singer Of The Year in 2002 and Tracey has one of the most soulful diva voices I've ever heard. Amazing pedigree and the funny thing is they reckon I can sing! We got them together to sing specifically for the album after we recorded them on a well known cover version we did last year and they sounded mega. So when we went for the vibe of the album it was a natural step to get the girls back and I'm so pleased we did. When we were recording I'd be sat with a guitar teaching the parts, all sheepish and thinking I sound like a little boy next to these three, and then when they'd sing things back I'd get one of those stupid grins on my face like you see in an American teen movie or something and get goose pimples. Just amazing."

With the Revolution Tour about to hit the concert halls of England, Ken is burning with the whole concept of radical Christianity as a revolution. "This message becomes stronger for me - the whole revolution thing. That one insignificant person can turn their life over to God to become one with him and as a result impact so many people because of what God will achieve through them. I want to live in a place where the streets are safe to walk, where children aren't abused, where women aren't raped, where sex isn't used as a barometer for whether you had a good night out, where drugs aren't wanted, where injustice is wiped out and where love is in charge. Look at what has been achieved by people like William Wilberforce who worked all his life to see the abolition of slavery in the British Empire, Martin Luther King for human rights in the USA, Mother Teresa - these have all been people impacted by God to see social change - they weren't famous before God touched them, but because of it. So if our album can in any way start people thinking and inspire them to take these sort of life changing steps, then I am a very humbled, thankful and happy man."

can u get yfriday to post their stuff on da net

hello dave here this is a gd article