Soon to tour with Noel Richards, Newcastle's YFRIDAY are the most anointed new rock worship team to emerge for years. Their leader Ken Riley spoke at length to Mike Rimmer. 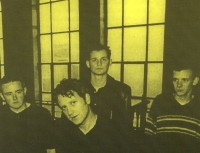 When i was a kid I would love to play on the games at the Spanish City funfair in Whitley Bay on the coast near my home town of Newcastle-Upon-Tyne. The first serious converation I ever had about Jesus happened on the beach there. When I got saved as a teenager, I would walk from Cullercoats to St Mary's Lighthouse and have fun paddling in the sea. It was in those days in the late 70s that I was just discovering Christian music and we'd listen to Chuck Girard and Andrae Crouch on the car stereo. Although I'd been to plenty of rock gigs there, Girard was the first Christian concert I ever attended when he played at the Newcastle City Hall.

20 years later, memories of those days and some of those old haunts come flooding back as I talk with Ken Riley from Yfriday. The news is good, God is on the move in my old hometown and he is definitely using the band to touch the lives of young Geordies. Ken teases me that I've lost my accent but one thing is for sure, I still get excited knowing that God is on the move.

Ken explains the roots of the band: "We got together through an event started up in Newcastle called Yfriday for which a band was needed. I think I joined the band on the second gig. Ben is actually the only original member. As it progressed and evolved, people came and went but the band's gone from strength to strength. The event has grown amazingly from its early days from around 60 to nearly 1000 people at Newcastle City Hall."

The band plan to take the event on a mini tour during the autumn to places in the north east area where the band don't normally go. This will culminate with a huge event at the City Hall in Newcastle where they hope to gather 1500 people together. Ambitious, but then God is on the move as Riley comments, "We're seeing amazing things. We're seeing people healed, we're seeing words of knowledge happening and there's an excellent preacher. If I'm allowed to say so there's good quality worship and you should see the young people in the north east going for it. It's amazing to see what they're doing with God." Ken pauses and in a humility which I discover is at the heart of everything the band are doing adds bashfully, "It's got a lot more to do with God than with me!"

The band may have made an impact in the north east but it now looks as though their giftings will be employed wider afield. The band played as a late addition to the bill at this year's Cross Rhythms festival in Devon and prior to that they have played at the Easter People event and future plans will see them playing across Britain with Noel Richards. Ken explains how that connection occurred: "We played a gig with Noel in June of '98 which was very good. It was fund raising for a charity in the North East. When we had finished recording the 'Rainmaker' album we actually rang Noel and asked him to be a special guest when we launched the album. He was and we had a brilliant time. For some reason what happened on that particular night seemed to really impact Noel himself. He got in touch with us the following day and said, 'I totally believe in what you're about and what you're doing, I want you to come on tour with us.' So we have this opportunity to go out and reach all these other people which is gonna be fantastic."

If Ken sounds excited, it's because he is! "I'm excited about lots of things. We've always been a band that have never pushed too hard on the doors. I don't know if this is a model for people to follow or not but we've found that doors have naturally opened and it's always been a sense that the timing is right. Whenever we've tried to push anything, it fails so we're comfortable that we'll see doors open and God does it and he uses us through it. There's an interesting dynamic, in so far as we've recorded 'Rainmaker' and put it out and now lots of interested people are coming to us. We're actually sitting back in Newcastle and they're coming to us and saying, 'Hey! we really believe what you guys are all about and we support you.' I think that is a key method that God uses. It means that we don't beat ourselves up, that we don't get too ambitious and things generally, naturally evolve."

The band took a rather novel approach to recording the 'Rainmaker' CD. Riley confesses, "It was on a very tight budget. The album was totally self-financed. We started an appeal for people to buy the CD in advance for Â£12. We had around 200 people who actually did that so that brought money in. There was money already from gigs. We borrowed money off people. As usual these things have a habit of going over budget but every time it looked like we were really gonna have to freeze because funds ran out, God turned up with money." So is the album a testimony to God's Church listening to him and offering money to help? Ken laughs and then states seriously, "It's called the faith way of recording an album."

The band actually spent about 25 days in the studio with Neil Costello but this was spread over a period of months. There was a week recording the basic tracks, a memorable but unorthodox weekend recording drums, taking over the drummer's house and recording there. Some more time adding overdubs and final vocals before they mixed the album. Ken recalls, "It was like giving birth. Anybody who's thinking of making an album to set their stall out, it has to be quality, quality, quality. Record three songs which are brilliant ones not six that aren't. Do it that way."

Since the band have been together for four years, it seems like a long time to wait for a debut album but Ken confesses, "There was a very, very secret tape that was produced two years ago called 'Yfriday'." He adds enigmatically, "It helped fund raising and there are 500 copies of the tape with some collectors items and some people in the country have got them."

The conversation moves on and I am keen to find out how Ken views the ministry of Yfriday. Does he have a sense of calling? He responds confidently, "Definitely. I spend time Holy Spirit daydreaming, which I would encourage any Christian to do. For us the call is to stand and do whatever we do to impact people. That's the call. The vision has broadened from it being a Newcastle/North East-based thing to a worldwide thing. The vision is expanding but it's all the same. It's evangelism, healing, ministry, just generally introducing people to God and introducing God to people. Just the fact that we're boldly going where no man has gone before if you like. We could go to Mars and the vision would be the same."

Ken continues, "I love to play in front of a crowd of people who don't know us that's got lots and lots of non-Christians in. I just love to stand there and literally tell it the way it is. I'm not ashamed or embarrassed about being a Christian. Why should we stand their apologetically saying, 'OK, well! You know I'm really sorry for saying this but you know God really does want you to be a Christian and if you'd be so kind and if you wouldn't think it so cheesy, please can you think about it but have a nice night.' We don't approach it like that. We're very forthright. We're very into God being hands on with the people. We play mainly in Christian venues, we're not brave enough yet to go into pubs and clubs. I think our vision is to stay on the edge of that. To have something different that is culturally relevant from a music point of view. If we can help people and produce music that they can play to their friends from school or from college or work or whatever and say, 'Hey! Come and listen to this Christian music, it's cool and why don't you come along to a gig? Why don't you come and see what I'm about, what my Christian faith means to me?"

Yfriday's approach is certainly bearing fruit in many different ways. The lives affected by their ministry stand as testimony that here is a band doing something right! Ken shares, "We were just reminding ourselves of how fortunate we are that God's given us the opportunity to do what we are doing. We think there's probably something in the region of hundreds of people who have been saved now as a result of the band ministering. That is just amazing. I mean I pinch myself. Hundreds of people are Christians because of me and the guys and because we've played somewhere but more importantly because God has turned up and used us."

Ken continues, "Our drummer Des told me just last week of a guy he knows who drifted away from God for a long, long time. He found things to occupy him on a Sunday morning so he wouldn't get involved with Church. He didn't want to know for maybe five or six years and Des managed to sell a CD to the guy. He says half way through the track 'Thank You For The Cross' on the first listen, he ended up on his knees in floods of tears and now he's back with God again."

Here's the hallmark of a band being used by God, there's no shortage of testimonies of God working. Recently at a Yfriday event, the band shared a word of knowledge with the crowd that God wanted to heal someone of a problem with their right eye. Ken says, "Two weeks later the band received a letter from a guy saying, 'Just to let you know it was me.' God had healed him. He'd had the injury for 10 years and his eye was completely healed. I love to see God in action. I love to see the testimony that God has healed somebody. God is working in the world. He's doing amazing things. They are the things we like to boast about, what God does."