Yolanda Adams: The US-based gospel artist causing a storm in the UK

YOLANDA ADAMS has been lodged in the US gospel charts since '91. Because of her own experiences she has a heart for women who have suffered abuse in their marriage. Tony Cummings finds out more. 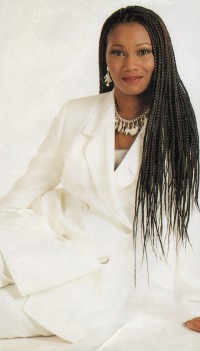 IN 1991 Cross Rhythms was swooning over a new name in black gospel, Yolanda Adams. Although her Through The Storm' album wasn't even available in the UK except through mail order from Travail, it quickly became a bi-word for excellence in Black church circles. Produced by jazzman Ben Tankard the album was a creative tour-de-force. Cross Rhythms 8 described how Yolanda possessed "a clear voice particularly effective on minor key, jazz-tinged ballads." The review continued, "Not that this is all 3-in-the-morning music. Yolanda lets the mantle of sophistication slip for the last two minutes of the title track to whoop and holler in classic church-wrecking style. There's also one sublime moment in the production when on "I'm Free" one of Yolanda's "Ooohwahs!" is caught in digital delay, repeated three times to fade before hornman Angello Christi comes in on the same note and phrase. Of such inspired moments classics are made."

Through The Storm' has been in the charts ever since its release. But it has taken two years and more for a follow-up to emerge. Now that new album 'Save The World' is causing a stir Stateside and we can but hope that someone will pick it up for release in the UK.

Yolanda has the looks, figure, height (she's 6 foot) and poise of a Vogue model. But behind the beauty and glitz of the showbiz fastlane is a lady of faith with a very real experience of what God's healing power in a life means and a very real desire to minister it. Yolanda told America's Score magazine, "I was married to an abuser -I believe that qualifies me in many different areas to minister to women who are going through or have gone through the same thing. To let them know -' Look I am not immune to pain. I am not immune to heartache, I am not immune to trouble!' Because a lot of people think, "Oh...she dresses so cute, she looks so good, she never has a care in the world -because she's always smiling.' Not true! We all go through a whole lot, and it's good to share with other people to help them in their healing. I believe that.

"I got married when I was 25," Yolanda continued. "I was married about a year or so. The abuse started even before I got married. What happens is - you see and you don't see - because you let the physical love get between what really matters. If you and God have the right relationship, you know how to love people, and if you don't place anybody above God, then everything's OK. But what happened was, I was so in love with this man, I mean, I didn't want to see anything wrong with him, I didn't want to see his toenails curl the wrong way! So the things that he would do...I would say "Get thee behind me Satan', and get real spiritual - and I'd be getting beat up I'd be anointing my house, saying This is not God', and going on...but if the person's will is not in it you can forget it!"

The singer is grateful to the Lord for the doors of opportunity the success of Through The Storm' has opened up for her. Said Adams, "It's meant more ministering to a wide variety of people. Having music on the album that appeals to everybody, you get a chance to go into other situations, like Jewish and Asian communities. It's amazing to see what God does when he gives you a plan to do it."

Yolanda has gone through many other changes since the release of the album.

"Personally, I'm more time oriented, as far as planes and things," commented Yolanda. "I'm no longer teaching school. Before I got into the solo thing, I was always crazy anyway...when you have a ministry to young kids, you automatically stay 'hip' to what's happening with them in order to minister to them the right way. You can't sing "Amazing Grace' to them the way momma used to sing it in church a long time ago. I'm basically the same, I'd be upset if I wasn't."

Among the many opportunities Yolanda has had since Through The Storm' was a chance to sing on The Jay Leno Show', a TV show popular nationwide in the States. It was "a blessing from the Lord," stated the vocalist. "Branford Marsalis heard my music and like it. He called my management (Sheba Freeman) and told her that they wanted me. I said, 'Cool'. They had such a good response from the first show, they wanted me back for Good Friday. Jay Leno thought it was a good thing to do to bring in the Easter weekend. Now they're trying to get me back on to premiere the new album."

That album promises to be as popular as its predecessor. One song, a smooth duet with Doug Williams, Yolanda singled out for special praise. And for the future, the beautiful gospel singer is seeing opportunities opening in books. "I have some books coming out in the next five years," Yolanda said. "The Lord sent me the publisher and everything. One of my books is for single women, one is for divorced women coping with singleness, one is for teens."

We can but hope our friends at Gosfest read this article and set the wheels in motion to bring Yolanda to the UK. She would surely find a warm welcome among Britain's gospel followers.