Riding on a crest of popularity is the gospel diva from Houston, Texas, YOLANDA ADAMS. She spoke to George Luke. 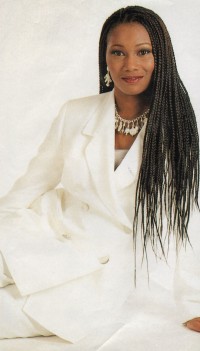 She's currently one of the hottest properties in gospel music, having recently released her fourth album, 'More Than A Melody', to massive critical acclaim. She also possesses one of the loudest, most "I dare you not to even smile" laughs you've ever heard. Yolanda Adams, a former model who turned to teaching after missing out on a career in television, was the special guest at the BGMAN's national gospel awards. I caught up with her at her hotel in London's Swiss Cottage on a particularly busy morning.

Life for Yolanda started 33 years ago in Houston, Texas, ("Born in Houston, raised in Houston, still living in Houston," Yolanda emphasises) where she was the eldest of six children in a family that was reasonably well off. Her father died in 1975 and in the same year she joined the South East Inspiration Choir. With recordings featured in Billboard, the choir was already considered professional, but as far as Yolanda was concerned, "it was just something to do at the time, because I was young. I loved being in the choir and I enjoyed singing. I grew up singing, because my mum was a pianist at all our churches and she'd make me sing!"

Yolanda attended Texas Southern University, graduating with a BSc degree in radio/TV communications. On leaving college Yolanda received an internship at a local TV station, Channel 11. Unfortunately for her the station went through a management buyout after she had been there a few months, and the new owners terminated all internships. With the possibility of a career in television apparently over, Yolanda went back to college, emerging in 1985 with a degree in education. During the week she'd teach in elementary school and at weekends sing with the choir.

The following year, Yolanda started travelling a little and doing solo engagements. This came about, explains Yolanda, "because when you're in a choir and you're one of the lead soloists, people want to hear you and it's cheaper to get just you instead of the whole choir!" The late Thomas Whitfield attended one of her choir's anniversary concerts, liked what he heard and offered to produce her. "It's not like I ran out and chased everybody down with a demo, because at that time it was just something to do. That particular weekend in February, he came down and said, 'I want to record you,' and I said, 'Ok, cool.' And I just figured, hey, I'll do this on weekends just like I'm doing with the choir, and teach during the week." But things didn't work out as she'd planned. The bookings increased steadily until in 1992 Yolanda had to choose between teaching and singing. "I retired from teaching," says Yolanda, "and it's been a wonderful experience."

Wonderful it may be now, but for a while a few years back her personal life did hit a painful low spot. In 1987 Yolanda met a young man whom she married the following year. What followed was an abusive relationship which ended when the couple divorced in 1990. Looking back, Yolanda says, "I really don't like to emphasise the physical or emotional abuse that I went through; I just like to tell people that I overcame it by getting out of it. First of all, I shouldn't have been in it in the first place, because I knew what kind of person he was in the beginning, but you know, sometimes we rationalise and say, 'Oh, but I love him,' or, 'He's so cute, he's so cuddly, he's so adorable,' and all the time he's beating you in the face, and that's not cool."

As part of her ministry nowadays, Yolanda tours colleges where she advises female students to beware of falling into a similar marital trap. "I tell them if you know a person has a certain kind of dysfunction before you get involved with them or marry them, please understand that you cannot change that person," Yolanda explains. "If he's physically abusive now, he'll be physically abusive when you're married - in fact, it will escalate. And if he emotionally abuses you, the same thing will happen on a higher level when you get married." The decision to marry must be made with prayer and the bottom line, according to her, is simple: "Don't marry anybody that God says don't marry." But despite being happily single now, her past experience hasn't put her off marriage. "Oh, definitely, I'm getting married again!" Yolanda emphasises, although the way her career's going at present it won't be for some time.

For the gospel artist who's achieved her kind of star status, a change of address to Nashville always seems to happen sooner or later, but Yolanda is staying put. "I am one of the busiest women in gospel music, so it's not like I have to be in Nashville to do whatever I have to do," Yolanda explains. "Unless you just want to do studio work or something like that, you don't have to live in Nashville. Like they say, 'build a better mousetrap and the people will come to you.' That's our philosophy. I don't ever want to live where the 'elite' of the industry are, simply because I don't like Nashville (big laugh). I only go there when I have to record, otherwise I don't. I'm a homebody kind of person."

Yolanda's favourite gospel artists include Daryl Coley, the Clark Sisters, Witness, Commissioned, Jon Kee and Kirk Franklin. "I listen to Kirk every now and then," says Yolanda, "but I've known that little boy for a long time! (That laugh again!) I knew him when he was directing choirs in Texas. We've known each other for a while, and I'm really proud of him." Kirk and his choir recently had a hit in the US pop chart which prompted me to ask what dangers, if any, there were when mainstream record companies jump on the gospel bandwagon. "I think the dangers will definitely be looking at the numbers you're selling, as opposed to whether it's a ministry or not," she replies. "If we override what the people are feeling, what they're going through to make sure we get the numbers, we've done a disservice, first of all to the people, and definitely to God, who's given us the ministry. We have to understand that when secular companies get involved, they want numbers - they couldn't care less about ministry. So, if you're the artist, you must make sure that your focus is ministry. You have to keep some kind of hold on what you do." Racism in the industry can also be a minus, she admits. "But the issue is, how will I respond to that? Will I be just as negative as the people who are racist? No! Because I represent Christ. I can't be that way."

Before her hopes of a career in TV were dashed, Yolanda had begun to make a name for herself on the catwalk. "I always wanted to be a model," she remembers. "You know, little girls grow up and they either want to be ballerinas, doctors, nurses, models or actresses. I never wanted to act; I just wanted to model. And because I was so much taller than everyone else, I went to modelling school and did a few modelling gigs, but then my grandfather said, 'Hey, you're the eldest of six kids, you'd better go to college and set the example. When you get out, I'll send you to Paris and you can model there.' It didn't happen that way, but I'm happy with what I'm doing." You mean even when you hear the telephone-number figures today's supermodels won't get out of bed for less than, you don't feel a slight tinge of regret? That laugh rings out again. "I know what they have to go through (to earn it). So much junk - the press always following them, the compromising pictures - well, they would be compromising for me; I can't say it would be for them, because I don't really know them. I'm proud of Tyra (Banks) and Naomi for being the supermodels they are and representing the community at large, and I know you in the UK are proud of Naomi, because she's doing a wonderful job, and she was in one of my favourite Michael Jackson videos, 'Keep It In The Closet' (laugh). It's give and take, because I live a wonderful life. I can't complain about anything -1 can drive the kind of car I want, I have a really wonderful house. I can't complain at all."

Besides working on her own stuff, Yolanda plans to spend some of the immediate future nurturing new talent. "I have a couple of groups that I want to produce," she says. "I don't know if I'd want to manage them - I think I'd let my manager do that. There's a girl group in Chicago, there's one in Louisiana - more of a teen group, and a young guy, also from Louisiana, who's a solo artist. Those projects are at the forefront of what I want to do. Give me two years and they'll be out there, selling records, thanking me at the Grammys - stuff like that (laugh). The teen group is called Tehillah, the young man's name is Gerrard Woods, and I'm not sure what the other group's called - I think they're called Friends." Any other plans? "Marriage is definitely in the future, maybe a kid or two (laugh). More producing, I don't want to have to do music full time when I'm, say, 50. At that time in my life I want to produce other people and get them out there. I want to be able to say that I've contributed to someone else's life in a positive way. I want to have a children's fund, where I help children that are disadvantaged rise up, go to college, things like that. I want to do those kinds of things for other people."

You are a blessing to the church and people in general and i like that, I pray God makes me know you more. Amen

I love you Yolanda, I like your attitude towards life-the fact that you are very positive and purehearted. You also have a good sense of morals. I look forward to meeting you. May God give u more grace and make your dreams come true.

I love yolanda Adams and her music I prey that she continue in the faith and living for the Lord. God Bless You Yolanda. How can I join her fan club