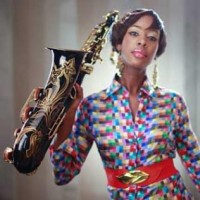 The release of 'April Showers May Flowers' by Yolanda Brown finally brings into the solo spotlight an artist widely acknowledged as one of the greatest instrumental talents, both Christian and non-Christian, on the whole British scene. Yolanda's critically acclaimed work has already won her two MOBOs while her work with a wide variety of artists from jazz to grime such as Sway DaSafo, Soweto Kinch, Terry Walker, Bashy, The Temptations, Omar Lye-Fook and Alexander O'Neal has brought her numerous accolades. Now this extraordinary exponent of the tenor, soprano and alto saxophone spoke to Cross Rhythms and began by expressing her deep satisfaction in seeing 'April Showers May Flowers' released on Black Grape Records.

"It was and is such a great feeling to have my debut album released and to be able to play these new songs live on tour. Even though it has been awhile coming it does feel like it's all happening at the right time. The title comes from the idea that everybody, no matter what age, status or race, has to work through something in life. It's not always easy and takes belief and perseverance. If they can make it through these 'showers' then they will indeed see the results, blessings and 'flowers'. When writing the album I was able to take the time to really focus on what I wanted the album to say and so it is a great relief to have it finished!"

At the risk of sounding like someone asking a parent to name her favourite child, Cross Rhythms asked Yolanda to name her favourite track. "I really have enjoyed recording all of the songs on the album and I love the stories/reasons that led me to write each one. But if I had to choose I would have to say 'Dear John'. My journey in music started as a secondary career, while studying for my PhD in Management Science at the University of Kent. I was touring abroad so regularly that I was not able to be on the University campus as much. Even though I was able to study and email my papers from the road, it felt like I was not able to give my all to both academia and music.

"After some time, I made a very prayerful decision to put my PhD on hold after four years of studying at the University of Kent. A sign to show I was making the right decision came a few months later, when I was awarded an Honorary Doctorate of Arts from the University of East London for my contribution to music! The song 'Dear John' is dedicated to my professor who has been so supportive in my studies as well as with my music and I knew that when I left the university that I would want to write a song that described all of the times I had to write my 'Dear John' emails to explain that I wouldn't be able to come in to uni due to music!" 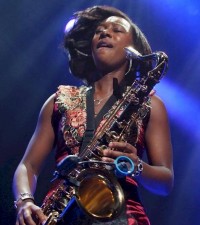 Yolanda Faye Brown was born on 4th October 1982 in Barking, East London to Jamaican parents. Always academically gifted her undergraduate Master's dissertation was on (deep breath) Combining SSM (soft systems methodology) And DESM (discrete event simulation) In An Athletics Club. After winning a MOBO in 2008 for Best Jazz, Yolanda released an EP, 'A Step Closer'. The following year she won another MOBO in the Best Jazz category while in 2010 her pivotal performances included an invitation to play at pan jazz 2010 where she performed alongside such musicians as Etienne Charles and Leon Foster Thomas. Also in 2010 she was presented with an Honorary Doctor Of The Arts degree by the University of East London. Yolanda is today a Patron of The Mayor Of London's Fund For Young Musicians.

In February this year 'April Showers May Flowers' was released to glowing reviews. With eight of the 10 tracks superbly fluid instrumentals and two songs showing Yolanda also had a chilled out, moody voice that critics compared to Sade, its artful fusion of jazz tinged with soul and even reggae, was warmly received. The Northern Echo called it "an accomplished debut album that tugs at your heartstrings while giving quiet reassurance." Yolands began a UK and overseas tour with two benchmark concerts at the HMV Hammersmith Apollo accompanied by her full band and the Royal Philharmonic Concert Orchestra.

Yolanda spoke about how it felt to play as a featured artist as opposed to an accompanist, "It is a true honor and privilege to be accepted as a solo artist and instrumentalist. I have always believed that music speaks and it is wonderful to be able to play in front of such a variety of audiences and make music that touches people even though there are no words. I have played in bands and concert bands before and the teamwork and music made there is fantastic. However, I really do prefer having the creative control to present the music that I want to make, being able to 'design' the concert/set lists and make the music I naturally make. I love to improvise and so being a solo artist lets me freely create."

Cross Rhythms asked Yolanda how and when she became a Christian. "I became a born again Christian when I was 14, after being invited to a friend's youth convention. I had always been brought up with Christian values and knowing the Bible but not in church. Finding out about how to build on my relationship with God and seeing young people with a passion for Jesus made me want to learn more and it was a wonderful moment where I was humbled. It was amazing being able to fellowship and to be a part of a church that really focused on young people and their faith. It was a defining moment in my teenage years, in growing up and getting to know myself." 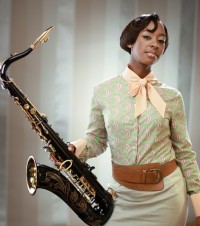 So did being a Christian cause tensions for Yolanda when working with mainstream performers who have a very different style? "It is a true blessing to be a Christian and have a personal relationship with God. The fundamental tool that this relationship and faith has given me is the security in knowing who I am, no matter where I am or who I meet. It is important to be secure in your values. With this knowledge, I have not really felt any tensions because I know I am where God wants me to be. If I am around people/musicians that have a 'different' or 'difficult' lifestyle, by being myself I can interact with them, duet and collaborate with them on stage. I know that my actions and words are a way of ministering, and while working, they can see God's grace in me. There have been many occasions where I have been able to talk about my faith and 'what keeps me going' to performers that don't have faith and it is great to be able to show this in my actions and conversations."

Backing up what she affirms, Yolanda is very much a lady of prayer. She said, "My band, my touring team and I all pray together before going on stage and also before travelling. It is important to be grateful for the wonderful places we are asked to play at and also to go on stage with the right frame of mind, letting God work through us and the music. It is also a great time of calm and reflection before going onstage."

Although touring commitments mean that Yolanda only occasionally gets the opportunity to play in church, she treasures those times. She said, "The church is where my musical journey as an artist started. It was fantastic being able to worship with my saxophone and to be a part of the praise team. I love being able to contribute to praise and worship. I still get so excited when I am asked to minister in my and other churches. It is heart warming and a blessing to be able to share my testimony and thanksgiving through my instrument."