Yvonne Lyon and Gareth Davies-Jones Live At The Lot 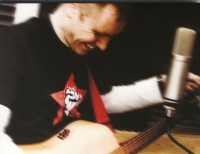 Tucked away at the foot of Edinburgh's lofty Castle, in the Grassmarket area, sits The Lot, a cosy little cafe/bar, which former church hosted, on Sunday 18th February, the final gig in the four-date Scottish winter-tour of two increasingly noticed musicians, Yvonne Lyon and Gareth Davies-Jones. Gareth has something of a cross-identity, for, despite his Welsh name, he was born and raised in Northern Ireland (hence his accent), but now lives in north England, from where he journeyed to make his voice heard north of the border. The decision to tour together was a wise one, for the two artists complement each other wonderfully, both in song-content and style, each accompanying the other on acoustic guitar/percussion and backing vocals, as they perform their self-penned songs in a loosely alternate basis. Enhancing these sounds on keyboards, accordion and guitar is Yvonne's hubbie, David Lyon, himself a noted musician, producer and worship leader, with several recordings to his name.

Gareth kicked off the set with "Money Goes Round", a lyrically hard-hitting song denouncing the multi-defects of the global economy. This he followed with "Butterfly", a song inspired by seeing a butterfly trapped on the London Underground when engaged on a recent March arranged by Christian Aid to protest against the Government's involvement with the IMF. "We take their money and we give them debt/And we promise them things they haven't had yet." Clearly Gareth isn't afraid to tackle difficult topics of world affairs in his music, be they political, economic or social. In the latter category, came "Breathe", a song about woman-abuse, inspired by a documentary on life in a women's shelter in London, which Gareth completed in the aftermath of the prostitute murders in Ipswich in the autumn of 2006.

The troubadour's more personal and spiritual side was expressed in a couple of songs with a water connection, such as "Reflections" ("I went down by the river to watch it run it's course. . ./Perhaps we're like the river, running from its source"). Back to a global vision, "Upside Down" is a potent declaration of how, if we take Jesus' teaching fully to heart, we can, through the power of his love, turn the world upside down.

Yvonne has striking, clear vocals which carry well. Both she and Gareth seemed relaxed, despite - or perhaps because of, the proximity of the audience - and both, too, have warm, friendly personalities, apparent as they shared personal anecdotes during the course of the evening. Like Gareth, many of Yvonne's songs also reveal, through a variety of circumstances, the power of love. "Mariana" came about through meeting a woman in Romania, who, despite the hardships of her life, showed a determination to press on, and her face glowed with serenity and joy. On the same theme, "Love" carries a rich, poetic portrayal of what that word truly signifies, and, being a track from "Fearless", was recently used as a first waltz at a friend's wedding. Two of Yvonne's most touching songs were "Everything's Fine", encouraging us to recognise unsuspecting angels in the face of life's adversities, and "Come", a beautiful invitation to unload our burdens on he who alone can give rest and peace.

Both musicians seek to reach out to secular as well as Christian audiences; thus, while there's an obvious spiritual quality to many of their non-cliched songs, such message came over in a subtle and non-provocative manner. Both Yvonne and Gareth are, of course, well known to Cross Rhythms, and each of their latest recordings ('Fearless' [2005] and 'Only For A Short While' [2006], respectively) were awarded a full 10 squares.

Just to show there's a lighter side to their music, one or two fun songs were delivered, such as "Once Upon A Squish", composed by two kids, both named Dylan, during an Arts Therapy course led by Yvonne at Yorkhill Hospital in Glasgow ('The Yorkhill Sessions' is the resulting charity recording).

The song "Down In The River To Pray" from the film O Brother, Where Art Thou drew the set to a close with extended, heart-felt applause for a delightful evening's entertainment, which was also a fitting showcase for some highly creative and thought-provoking output from two of the UK's finest singer/songwriters.