The band formerly known as 65dBA have re-launched themselves as dba and released a hot new album. Dave Drodge asked the electronics maestro Robbie Bronnimann some questions. 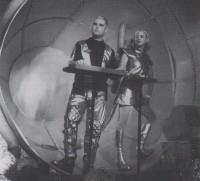 Over a delicious bowl of chicken soup, I ask what the concept behind the band's latest album 'Bubble' is.

"We decided to write it all around a space theme looking at creation on a universal level. After all, it's God's universe, he created it all, not just the earth. Sometimes we need to be reminded of that."

And what of the songs?
"There are quite a few love songs on the album, which people can enjoy either on a human level or as worship to God."

It was reported (by yours truly) last year that dba would be releasing some singles for the mainstream market so I ask...when will the general public be able to get their hands on the first of these fully-fledged singles?

"It's almost decided what we want to release first and we've already had offers from production companies and producers. We hope to have things rolling by the summertime."

Since the final 65dBA album, many changes have happened within the group.

"We're not a two-piece line up myself and Shaz (with Robin Knox - sound and Andy Hunter - lights). Both Danny and Phil felt it was the right time to move onto other things. We had all been feeling for a while it would probably happen in the long term."

Have these changes altered the sound of the band?
"Yes, I certainly feel that we now have a more focused sound and image which enables us to concentrate on what we feel we're best at."

What was the level of creative input on the album from anyone outside of the group?
"We have worked with Zarc Porter (WWMT) and others on previous projects, but this album was written and produced by myself and Ray Goudie (Ultra Music). Ray has more patience with things like vocals which quite often send me up the wall!" (Ray Goudie is director of NGM, of which Orange Records is a division.) "We also had a great deal of encouragement from Alliance Music who are the 'umbrella label' and distributors of Orange Records. Alliance A&R man David Bruce was a tremendous help to us in many different ways. He even went as far as hanging sheets of aluminium foil on the walls for us at the photo shoot!"

Just for our brothers and sisters across the water, I ask whether the album is going to be available over there, since Alliance Music don't have a US branch.

"Orange's Hydro project 'Spiritualisation' is signed to Scott Blackwell's N-Soul Records. dba doesn't yet have an American distribution deal, although Warner Alliance have first option on 'bubble', which is currently being discussed."

With the change in personnel has come a change in name. I ask what their name means, and why they altered it.
"In layman's terms dba refers to a scale of sound measurement in decibels. Years ago, when the band had just started out, we did an open air concert in Swindon where the sound restriction was set at 65dBA."

How do you start out writing a song?
"I tend to start with an instrumental groove idea, which can range from something really simple to something quite complex. We use this as the catalyst to see whether an idea will make the grade or not. At this stage I try to use as little equipment as possible because I think that technology can easily cover up a bad song. Because of this I am hoping to get a basic set up at home for those times when I absolutely have to put something down before I forget it. At other times Ray comes with a chorus hook line or another idea and it's developed from there."

What about the lyrics?
"The same can apply to the lyrics as well, but generally, when it comes to lyric writing, there is always a core of three people; Ray, Shaz and myself. Ray helps keep the vision and themes on course and brings a lot of experience and depth to the creative mix. I sometimes get on a roll and write a whole song in one sitting, but very often I write a chorus or verse, which Ray then develops. Shaz is particularly good at being able to write lyrics on a very personal level and putting emotion into a song, especially the slower ones."

The Great Awakening was one of my favourite albums growing up. I remember meeting Shaz at a youth event called The Gathering in Thornbury near Bristol back in the 90s! I'm 34 now and still have a mix tape made by a friend with dba songs on it! I treasure it as a memory of a time when Christian music was more diverse in some ways

You came to my school (Deer Park) many many years ago -I'm nearly 41! but your music has stayed with me, be interesting to hear the music you produce now.

I wish I could find this. I lost my CD of this. Can't find it on Amazon.com or Itunes either. :(

For more on dba visit the dba artist profile