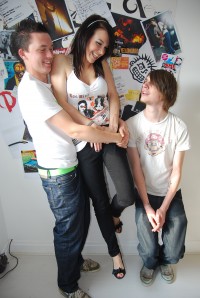 Tunbridge Wells-based pop rockers somethingABOUTnothing are an unusual band. In an age when it is fashionable for rock acts to sound off about social justice, this team have put their money where their mouth is and are donating 25 per cent of sales of all their CDs to a charity trying to help the destitute children of Zimbabwe. And at a time when many bands are moving away from the uncool realms of Christian ministry to pitch at the mainstream as "a band who happen to be Christians," somethingABOUTnothing are coming the other way, having started in the mainstream but are now going for ministry. The band consist of Jonnie Norgate (vocals, guitar), Jade Ware-Jarrett (bass) and Luke Harper (drums).

Back in June the band released a single "Miracle" specifically for The Just Children Foundation. Jade told me about the charity. "One of our old curates at our church is a trustee of the foundation and many, many years ago he took a couple of people from our church out to Zimbabwe to visit. Coincidently those two people were my dad and Jon's dad. Since then our church has supported the foundation financially and through prayer. In the summer of '07 a group from our church went out to Zimbabwe, me and Luke included, to see first hand what this charity achieves and does for the children of Zimbabwe. It is amazing. JCF welcomes kids off the streets who have been primarily orphaned or affected by HIV/Aids. They provide them with food, clothing, accommodation and try to reunite them with their extended family. Where that is not possible they place them in one of the centres where they look after them and try and settle them into school so they can be educated for the future. The organisation is Christian-based and they meet every morning for daily devotions and to hear the Gospel. Anthony, our manager, is also the Secretary for the UK arm of the charity. For these children who have been abandoned, abused or orphaned to know that there will always be someone that loves them isn't something they are used to but is such a comfort to them. We decided as a band that we would support this charity as best we could, it's such a worthy cause and when I was in Zimbabwe I learnt so much from those children about my faith. This is my way of thanking them."

The "Miracle" single was recorded at Broadwater Studios in Newcastle-upon-Tyne and was produced by Dez Minto and Gav Richards. Jade spoke about the sessions. "We only had a day and a half to record two tracks as we were out and about supporting Superhero, so it was quite hard work and tiring. It was great to be working with people who you looked up to when you were younger, I know Dez was a massive reason why Luke started drumming. So for Luke it was exciting to be able to work with someone who encouraged him and inspired him so much. The recording was done in a very different way to 'What Will You Say?', which was strange getting used to but the outcome proves it a better technique. Personally, I liked the fact that Dez and Gav are passionate musicians themselves so they want you to do the best you can, and when they start to get excited about your music it encourages you. To know the people who are recording and editing your music enjoy what you've done is a huge reassurance. Also to get some musical guidance and input from them was great, it enabled us to try out things and see what we thought and if we didn't like the idea they weren't offended. We are so pleased with the outcome and can't wait to go back up to Broadwater Studios and get some more material recorded."

SomethingABOUTnothing started in 2004 "messing about in Luke's attic." The trio wrote and recorded their first EP, 'Temporarily On Pause', about which the group now admit it wise to keep quiet, "though it is funny listening to it." Shortly after the EP's release, Jade joined Jonnie, Luke and Simon. Said Jade, "This gave somethingABOUTnothing a quite unique line up of drums, guitar and two basses with vocals. This was the line up for our second EP 'What Will You Say?' and for a year or so, until Jonnie put down his bass and picked up a guitar, leaving me on the bass. It was during this time that we began playing larger gigs including Nth Fest, H3 Festival, Grassrootz and winning Greenbelt Battle Of The Bands. Towards the end of '07 the line up changed for a third time with Simon leaving the band, all on good terms - he is still a good friend to us. The rest of us decided to carry on and see if we could make it work."

SomethingABOUTnothing also decided to take more overtly Christian approach to their music. Said Jade, "Originally we were a band made up of people who happened to be Christians, but during '07/'08 we decided that we would use the situation we are in to take what we believe to people who didn't believe it. Obviously it's hard at times, we all have our faults but at the end of the day we all call ourselves Christians and we all try our best to live our lives for God. So I guess you could call us a ministry band. Our material speaks about what we believe and when we feel it is appropriate for us and the audience we speak about our beliefs on stage. Our faith is what drives us to do what we do and ultimately it is God who provides the opportunities for us."

Musically the band seem to take in a wide range of influences. Said Jade, "Luke loves his heavier music whereas Jon and I stick to the lighter music, something easier on the ears. Collectively we all like bands like Paramore, Kids In Glass Houses and Senses Fail. But influence wise it would probably be people like Phil Wickham - an amazing Christian singer/songwriter who all three of us are massive fans of. Fortunately for us we grew up in a town with a good youth scene so we saw bands like Delirious?, Steve and Yfriday who obviously influenced us by speaking about God in their music. I suppose it's just what we like to listen to is what influences us, and what we enjoy playing."

With the "Miracle" single being enthusiastically received (Cross Rhythms' reviewer enthused, "I can't remember coming across a two track single in the past that has ever been quite as explosive as this one."), a full length somethingABOUTnothing album is something the band are praying about. Commented Jade, "We would love to do an album. Money is obviously a major problem as recording isn't cheap but we also want to ensure we have strong enough material to make an album that we will be proud of. So one day soon hopefully we will release an album, it'll be worth the wait."

this is fantastic the children of just children foundation and zimbabwe appreciate this gesture by the young people of Tunbridge wells.

Absolutely agree with Edi - a great bunch. Good to hear what they're doing

Lovely people. Great band.
If you haven't heard them, I heartily recommend giving them a listen!

Looking forward to the album.....