In an age when in-your-face evangelism makes many bands cringe with embarrassment, the total, fearless commitment of THEBANDWITHNONAME is breathtaking. Tony Cummings met the group. 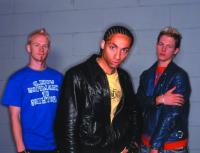 Chip K, Presha and The Bobsta aren't on stage. Rather, they're gathered in the upstairs room of Zarc Porter's house-cum-studio where the studio maestro concocts thebandwithnoname's thrilling fusions of rock, rap, breakbeat and garage. But Manchester's musical evangelists seem to permeate energy and excitement. To a journalist used to the monosyllabic mumblings of studio-jaded musos, chatting to these fast talking live wires is an intoxicating yet exhausting experience. Logically thebandwithnoname should be crumpled with fatigue. They ministered every night of Festival: Manchester, played a gig last night and are now having to cram in the final recording sessions to their second album 'Schizophrenix' so it can be released in time for the Revolution Tour which they are undertaking in November with Yfriday and Steve.
Yet Florida-born Chip K is a coiled up spring of energy. And nothing sends the rapper/singer into hyperdrive more than to be able to report what God continues to do at the band's concerts, like Festival: Manchester for instance. "We had a fantastic, amazing time seeing God move in power there," Chip enthuses. "We played one gig at Manchester Apollo and the organiser said, 'Look, we haven't had many responses to the Gospel so far. So tonight, rather than give you a 20 minute set we're just going to give you two songs and the rest of the time we'll use for the appeal.' What faith! And it was incredible, dozens and dozens of young people came forward to receive Christ. During the prayer meeting prior to the gig a lady had had a word of knowledge about how there was going to be somebody at the gig who'd recently been close to suicide. So I shared her word of knowledge from the stage. And afterwards when we were talking to the crowd, first one girl, then a second one with her mother came and told me that that word was for them. And later I heard of a young man who knew the word was for him. All received healing. That word was for three people! Incredible!"

The band's 'Schizophrenix' album is clearly going to be every bit as electrifying as their 'The Blitz' debut. Earlier that day Zarc Porter had played me most of the album so far recorded and the impact was breathtaking. Particularly heart-stopping was the Prodigy-style "Schizophrenic Skin". Its rap from Presha echoes the self-loathing of Paul of Tarsus in Romans 7 when he cries out, "What I want to do I do not do, but what I hate I do." The Bobsta observes, "The song is all about the tension, the spiritual battle that rages within each of us." When asked whether the 'Schizophrenix' title might also reflect the extraordinary musical eclecticism of this impossible-to-classify band, Presha ruefully admits it could be. "I know some people find it bewildering that we cover so many styles. But in a set of ours, there'll be something nu metal kids can relate to, something for people with R&B/urban tastes, something for young girls who want pop ballads. We cover as many bases as we can."

Another of the bases covered is hymnody. After their radical transformation of "Amazing Grace", the band now return to the hymnals for "Before The Throne Of God" which, with a unique arrangement in 6/8 time with one of the deepest, heaviest drum sounds ever concocted in the studio, make the beautiful words of the 17th century's Charitie L De Chenez into a whole new realm. Comments Bobby, "The words are beautiful ('My name is written on his hands/My name is hidden in his heart/I know that while in Heaven he stands/No power can force me to depart') and the challenge was to find a way to arrange the hymn which would work for thebandwithnoname. I think we've done it." No doubt the song will also be a most effective onstage intro into one of Chip's famed preaches. Another outstanding track on 'Schizophrenix' is the crunching nu metal groove "Found And Lost". It actually started off as something completely different. Explains Bobby, "The process of composing can be quite complicated. Zarc had an idea for something. It was originally going to be called "Freak". But then it began to change. Then Mark (Pennells) came up with the amazing lyrics, all about being found by Jesus and lost in worship. It evolved into one of the strongest tracks on the album."

There are two exemplary covers on the album, a new version of Rozalla's "Everybody's Free", the only track not produced by Zarc Porter, with Matt Wanstall doing a fine job in re-assembling the old dancefloor anthem for today's audience. Even more surprising, is a version of the Porter/Pennells song "The Best Thing", originally heard on the Avalon album 'Oxygen'. "Our version is NOTHING like Avalon's," Chip laughs. "It's more like Avalon meet Marilyn Manson with lots of chopped up guitar. It's got a great lyric." Another great lyric is "Home" with its towering anthemic chorus about Heaven. "One of the things I like about Southern gospel.," Chip has to stop while Presha and Bobby howl their protests. Eventually he's allowed to continue. "One of the things I like about Southern gospel is all those songs about Heaven. It's a theme you seldom hear in contemporary music and we thought it'd be great if we had a song about Heaven in our set. Let's face it, it sounds a FANTASTIC place. We can't wait to get there."

Methinks there will be plenty of work for these so-talented hyperactive evangelists before the Lord calls them home.

thanks leon for comin to my school loove u

this is amazing.
the man with a blonde mohork is a legend!!
he came to are skwl + was the best!
+ he was american woooo!

Love the band and it meaningful songs. Hoping that it will rub off on my children too.

Now I will need to order their music to be imported. Glad that I could listen and see them play on stage. The Harvest 2009 is really awsome. That is one place I would love to get to in my retirement.

I met Chip and James from the band with no name last night! they were guest speakers at my youth group! they are amazing and generally really nice guys! and am going to one of their gigs tomorrow night! WOOOOOOOOOOP!

hy!! i Love The Band WitH No Name .i descovered this band now...when they sing in bucharest..and i'm so sad because i didn't know the band before they come here...cause it was a dream...a complet dream!!llll I LOVE CHIPK... thebandwithnoname helped me to begin follow jesus christ again...:X:X

Bandwithnoname are great LIVE. I prefer them to delirious or anybody else. :)

thebandwithnoname are my favourite band by a mile!!
They really helped me become a christian and help me when i train for football on my own an get to know christ...i love your music guys so much please keep it comin !!
see ya soon