Aaron Bucks: Nashville-based CR radio hitmaker with "California" and now "I Got You" 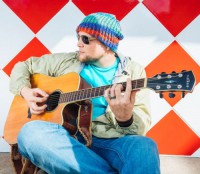 Aaron Bucks is a singer and songwriter from Vancouver, Canada, who, in his website biography, says he is "not quite pop enough for Jason Mraz but not quite folk enough for Jack Johnson." Maybe that comment will have to be amended soon because, thanks to some dazzling electro-pop arrangements from Dove Award-winning producer Ian Eskelin, Bucks has already delivered a Cross Rhythms radio hit with his debut single "California", for BEC Recordings, and has now just released an engaging new single, "I Got You", with one of the most memorable hooks since the last Peter Pan movie.

Said Bucks, "On Friday, February 15th, 2019, I had gotten together with a couple friends to write a song. The one topic I had shied away from writing directly about was where God had saved me from, yet it seemed this day it was the very subject God wanted me to face head on. You see, the church I was raised in taught that Jesus wasn't enough and this was why we were to follow their additional teachings. When I began standing on the Scriptures alone, it became very clear that I was being compelled to follow Jesus and leave all that I had known socially and religiously. At the time I didn't realise I was stepping into an indescribable relationship and discovery of God which would lead to an encounter with the fruit of the Spirit in such a tangible way.

"It was now the afternoon of Tuesday the 19th, and I was going to the studio to finish up writing and to sing the vocals for 'I Got You' when I got the call that no one ever wants to get. My youngest son, Tobias, had stopped breathing and was being taken by ambulance to the hospital. I cancelled everything and rushed to meet my wife there and be with him. I didn't make it in time. Tragically, they had not been able to revive him and he had passed. A few weeks later I stepped into the booth to cut vocals on the demo. I thought it would be good for some music therapy, and in honesty, I was still numb from the loss and the weight of grief I carried. As the track started I began singing, 'I got a peace past understanding, when my worries overwhelm me. . . I got a joy down deep in my soul 'cause you won't let me go. . . I know, I know, I know. . .'. The lyrics rocked me.

"In that moment I was overwhelmed by worry and pain. My fears had crashed through my world like a flood. The things I had written about I was now experiencing, again. Yet, in the midst of the hardest season of my life I found I was able to stand and sing of his peace with greater authority, it was still with me. Even when I let go, when I was overcome, when I was overwhelmed, he never let go of me. This peace once again passed my understanding. It feels surreal now to be sharing this moment of my life. This isn't a song of 'when it happens' or just speaking hypothetically. This is a song of right now. The lyrics are tried, tested and true; not because of my strength or anything I humanly possess, but because God is faithful, he is true, he is good."

While growing up in Vancouver, Aaron always gravitated towards music, but the pressure to pursue a conventional career kept him from taking his passion for music and songwriting seriously. Opting instead for culinary school, he spent every weekend performing at weddings and parties while also leading worship at his local church. Through encouragement from fans who'd heard him play and friends who knew his passion for music, an old acquaintance offered to help pay for him to record an album, which pushed him to re-evaluate his career path and follow his music passion.

Bucks recorded a batch of songs with Eskelin which were so good that Eskelin was able to land a new partnership for his Radiate Music with BEC. Brandon Ebel, President of BEC Recordings/Tooth & Nail Records, shared, "I've known and worked with Ian Eskelin for almost 20 years and I couldn't be more excited about this partnership. Ian played me Aaron's music and his first single grabbed my attention right away. I look forward to working with Aaron alongside Radiate Music."

Aaron's first single through the Radiate/BEC partnership was "California", a song which was co-written by Bucks and Eskelin along with Doug McKelvey, and is a personal song that shares about the true meaning of friendship. "Everyone has moments in life where we feel isolated and that no one else has experienced what we are going through," Bucks explained. "I had a couple friends in my life who, during some tough moments, were there for me and chose to take the time to be my 'brother's keeper.' This song speaks deeply into that friendship and our camaraderie."

When asked what inspires him as an artist and a songwriter, Bucks shared, "Inspiration is literally everywhere, but the trick is to slow myself down enough to tap into it. One thing that inspires me is humanity itself, hearing stories of strength, perseverance, will, determination, love, faith and, yes, even the stories of failures and struggles move me. Ultimately wherever the listener may be in life, I hope my music can truly brighten their day."

Aaron currently resides in Nashville with his wife and three children. It's pretty clear to Cross Rhythms that the Bucks/Eskelin musical marriage won't be finishing anytime soon.