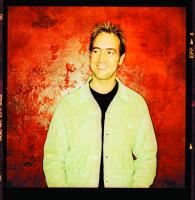 1. What do you think has been your biggest achievement to date?

It's hard to narrow it down to one specific thing but I think the new album 'Closer' would be my biggest achievement so far. I really am more excited about this than anything I have done in the past. I tend not to look back on things too much.

2. I understand many of the songs on 'Closer' weren't intended for an album.

I never set out to write these songs with an album in mind. I think if you get into that way of thinking you will write for the wrong reasons. I write simply because I really enjoy writing and feel I have something that's worth saying. Secondly, because I'm a singer I try and write songs that are singable and memorable as I don't believe in making things difficult for people. I write very much as I think. I don't use fancy phrases since I don't think it's helpful for people. I'm not really out to impress anyone, but there is still depth to the songs. For me, I am a "melody man". The songs I like best generally have great melodies -it will be the melody that hits me first. Worship should be an emotional time and a good melody will cause an emotional response, hopefully. So I always try and write strong melodies first and then add my lyrics to the melody. If I don't like a melody of a song I would most definitely find it much harder to sing and enjoy it.

3. What was it like recording with producer Paul Burton?

It was great working with Paul, but also very different and seriously
hard work. I've never made an album this way before. I basically said to Paul, "Do what you want, tell me how you want me to sing - produce me!" .For any artist or singer it's the hardest thing to lay it all down, but that's what I believed in my heart I needed to do for this album to work. The reason I wanted Paul to do the album was to move me away from what I would typically want to do and to try something new. Paul really did just that, he pushed me vocally, shifting the keys up and getting the band to create a much more energetic sound. On the first three days of recording he had me singing solid with the band working the tracks. I have never worked so hard vocally EVER before! I've done loads of sessions over the past eight years but none quite like this. The band were absolutely amazing. Some of them played on the Vineyard album 'Hungry' so what can you expect! They all worked so hard and there was a real sense of teamwork. The ideas that came out were incredible. It's like we were made for each other and we've become strong friends too. It was also fantastic having Cathy Burton on bvs and Aaron Frith, both of whom I've only worked with once prior to making this album. I can't believe how much the songs have changed from the demos. Just amazing! I remember hearing three or four of the tracks when I came back to do my vocals the following week. I just sat there and grinned!

4. What are your hopes for the album?

My hope is that when people hear this album they will realise it's not just another worship album but there is a real freshness and relevance to the songs. I hope listeners will realise again how truly amazing God is and it will cause them to move 'Closer' to him in their own personal walk. My hope is also that the songs will appeal locally and internationally.

5. What is in your CD player at the moment?

6. Does anything scare you?

Sometimes my bank balance does!

7. What's your most valued possession?

My wife, Becky and Ben.

8. Do you have any unfulfilled ambitions?

9. You were brought up in Leeds, but have lived in Sussex for the last five years. What do you miss most about living in the North?

For sure the Aagrah Indian restaurant in Bradford. You can't explain the "Northern way", you have to be born there to understand. It's the best place on Earth... I expect we will be back!

It's likely by then you'll be able to buy a copy of 'The Best Of The Best Of Simon Goodall'! But seriously, I'm sure I'll still be gigging somewhere, God willing.