One of the best privately released albums of the last year is by Leeds songsmith SIMON GOODALL. He spoke to Mike Rimmer. 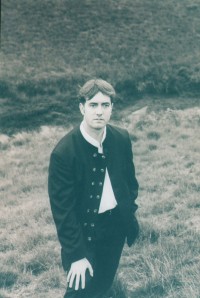 Now then, now then, howzabout that then? Let me fix it for you..." Simon Goodall bursts into fits of laughter as his near perfect Jimmy Saville impression finally falls apart. Like Mr Fixit, Simon hails from Leeds where he is currently studying voice at that city's famous music college (previous CCM graduates include lona's Dave Bainbridge, Adrian Snell and Joe King). As a kid Simon played the trumpet before learning the guitar and at family gatherings he impersonated Donny Osmond!

Thankfully he's come a long way since then! Recording his debut album, the privately released 'Generous Love', with the help of the seasoned CCM producer Christopher Norton must have been like a dream come true. "Anybody who is a singer or a musician dreams of making a record," Simon confirms. "But very few of us get the opportunity to do it. I decided three years ago to change my focus and I really felt that God was challenging me to stand up and write songs about who he is and communicate that. The overall message of the album is that God loves this world passionately."

Brought up in Leeds, Simon's parents sent him to church when he was younger and I wondered how he had become a Christian. Remembers Simon, "It wasn't until my sister became a Christian that things started happening. I noticed that she had changed and she invited me to see this film, The Cross And The Switchblade, and I had no idea what it was going to be about. I certainly didn't go in there expecting a life changing decision to happen. But it certainly opened my eyes because I'd always assumed I was a Christian!"

Initially becoming a Christian didn't really affect his music because he wasn't writing songs at that time. However Simon started getting into the Bible and through that wanted to communicate what he'd discovered of God to other people. "The only way I knew how to do that," says Simon, "was through music. You can say things through songs that you could never say face to face."

In the '80s Simon spent a lot of time developing his music and serving as worship leader in City Church, Leeds where he was able to write and try out worship songs. This was an excellent platform to develop his songwriting because he could test his songs out on the church! That experience has obviously paid off because one of Simon's worship songs will be featured on pan piper Simon Bernard-Smith's new album.

Simon has written all the songs on his debut album, some with poet Rob Dunsire. I wanted to know about the "Generous Love" title song. Simon explains, "When I think about God, I think about him as a God of love so I wanted to communicate to people outside the Church through a song that God really cares."

Musically Simon has adopted a variety of styles on 'Generous Love' including sanctified dance where Synergy's Tim Riches produced "Your Love". What was it like working with Tim? "We worked on that in the studio and we had great fun," remembers Simon. He laughs, "I had to kind of hold him down a bit. I don't know if you've heard any of Synergy's stuff. It's quite wild musically. He had to come in and arrange the track to suit my voice."

I wondered how things have changed since Simon recorded the album. "My feet have not touched the ground." He grins, "My life has changed because I've had to learn to be more flexible in what I do. I am a married man, I have two children and I think my wife finds it difficult. Obviously anything that you decide to do costs but it's something that we both decided was right to do. She's very supportive but it's still been quite challenging."

But then it's not just his own music that he's been doing. The Goodall diary boasts recording sessions for Marilyn Baker's recent album, Christopher Norton's 'World Of Worship' project and only last week he sang a solo for Graham Kendrick's latest release. It is all very frantic and all very exciting.

One of the outstanding songs on 'Generous Love' is "All You've Done For Me". As Simon explained, it was born out of an experience he had during the move of the Holy Spirit in his church. "One night everything was going wild in the church and to be honest I felt right out of it so I went and sat at the piano and God spoke to me about his love and I just cried. I always knew that God loved me but there was something fresh about rediscovering that so I wrote the song."

Simon Goodall is a man in transition, moving into music ministry from studying at college, he is at the start of the journey. There is a freshness in his approach and a reality in the way he expresses his faith in a down to earth manner. 'Generous Love' is an excellent debut and hopefully it will act as a calling card to give him the opportunity to share the love of Jesus whenever he performs.