Simon Goodall: Live From the Patio

Cross Rhythms reader John Jones had a pretty unique experience when singer/songwriter SIMON GOODALL came to his friend's home to play a gig. Mike Rimmer was there too and took the opportunity to speak to the songsmith. 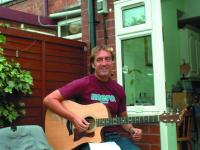 It's a pleasant summer evening and Simon Goodall is in Coventry playing a very unusual concert - at someone's home. John Jones won a competition in Cross Rhythms to have Simon play a gig and gave the prize to his mate Ivor Green who loves Simon's music. It only proves the adage that greater love hath no man than he lay down his free Simon Goodall gig for his friend.

It was supposed to be in a lounge but it's such a nice night, we're on the patio. John and Ivor are there along with family and various friends from their Baptist church. Because this is a proper gig, local singer Rob Halligan is the support act, starting the evening singing a few of his own songs and busking with Simon. Me? I am busking too! I am backing Simon by hitting some bongos! He looks at the crowd of about 10 people and jokes, "Well, I think it's probably the biggest crowd I've ever played to." He takes them through material from all his recordings in chronological order, sharing stories along the way and telling jokes. And there's a promise of a curry afterwards!

He likes his curries does Simon and afterwards he jokes that he should do a tour of Britain's curry houses! That would be an innovative idea. These days Simon is working on material for a new album, doing plenty of work as a session singer and basking in the critical acclaim that his most recent project 'Closer' has gained. An edgy worship album, it has demonstrated another side of his music and he's still proud of the album. He comments, "It still feels totally fresh and totally right now. It's just fantastic when you see people singing the songs and they're worshipping God and they're actually getting closer to God in the songs."

In his home studio Simon has also been working with his friend, evangelist, escapologist and fellow curry enthusiast Steve Legg. It's a collaboration that has led to Simon fulfilling a dream but more of that later! Simon has his own indie label and publishing company called Front To Back designed to help and encourage unsigned artists. Simon has produced a number of independent albums as he shares, "We try to do recordings at costs that are affordable. So we might do independent projects for Â£3,000 or Â£5,000. My heart is to really encourage new artists and to work with them and guide them a bit, you know?" 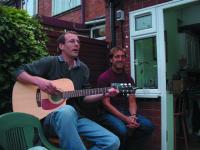 Most recently Simon has been working on Steve Legg's projects 'It's A Boy' and 'King Of The Hill'. The Christmas project 'It's A Boy' was originally designed as a musical for schools to perform but the idea has expanded. At the time of writing, the project has been turned into a state of the art animated DVD and Steve Legg plans on getting this unique version of the Christmas story into every school in Britain.

To add the icing to the cake, the main song on the album was written by Simon and Cliff Richard recently recorded a version of it for the DVD. For Simon, this was the fulfillment of a lifelong dream. "It is just amazing isn't it?" he laughs. "We went up to London and we met him and he's just such a lovely guy. I was a little bit nervous but we basically just got on and did the song. Cliff's very professional in the studio. I've always had a lot of respect for him, obviously because he's a Christian and because he's a fantastic singer."

From Sir Cliff recording the song for the 'It's A Boy' DVD, things then took an even more exciting turn as Simon shares, "Eventually, they said that they liked the song so much, would we mind if they put it on Cliff's Christmas single? And we said, 'WOULD WE MIND?!'" He laughs and continues, "So Chris Eaton's 'Santa's List' is going to be the main song on the single. I think it's good that Cliff is recording songs written by two British Christian writers." And along the way, Simon has a dream come true, Cliff Richard has recorded one of his songs!

Back on the patio Simon is messing about between songs, Rob Halligan is doing his best Elvis impression saying "thankyouverymuch" in a deep Memphis growl at the end of a song while Simon is doing his best Cliff. Someone suggests he sings like Cliff and Simon explains that this is just how he sounds. In fact Cliff's manager Bill Latham confessed the voice was so close that even he was fooled. And then it's time for a curry! It's not every day that you can go out for a curry with most of your audience!