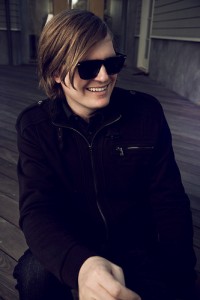 The release in the UK through Integrity of the Tooth & Nail album 'Sublime Currency' by Abandoned Pools brings to Christian retail one of the most talented and enigmatic figures in alternative rock. Tommy Walter is a Californian singer/songwriter who down the years has built up a considerable fanbase since he first emerged as the bass player and co-founder of the band Eels, whose melancholic music gained them recognition in 1996 with such gloomy songs as "Novocaine For The Soul" and "Your Lucky Day In Hell". After leaving Eels in 1997 Tommy formed a band called Metromax who, after changing their name to Tely, released a download album. However, it was Walter's solo project 'Humanistic', released on Extasy Records in 2001 under the name Abandoned Pools, which brought him MTV exposure. Two Abandoned Pools projects in 2005, the EP 'The Reverb' and the album 'Armed To The Teeth' released through the Universal giant, promised the big breakthrough but that never quite happened. 'Armed To The Teeth' revealed a songwriter grappling with confusion and darkness. Now, seven years on, Tommy has found solace in his faith and recent marriage.

In January 2012 Abandoned Pools revealed that they had signed to Seattle's renowned Christian independent Tooth & Nail Records. 'Sublime Currency' was released in the US on 28th August. The everythingrecording website asked Tommy why he had decided to record again under the Abandoned Pools moniker. Said Tommy, "I've been writing for AP over the years and just felt like it was time. The fans were consistently asking for another album too, so I knew I wouldn't be doing it for nothing."

So how did he end up signing with Tooth & Nail? "Simply, my manager met the A&R rep at SXSW (the trade show held in Texas). We sent him some new music and that was that. He was already familiar with 'Humanistic'." So what did Tommy feel about signing with a Christian label? "My first thought was that I hoped my music could be inspiring to a Christian audience as well. Some fans may listen to 'Armed To The Teeth' and get the wrong idea about me."

'Sublime Currency' showcased some fine songs. As well as the current Cross Rhythms turntable hit "9 Billion" there is the song "Behemoth" with its intriguing lyric "Tonight/A current blows inside my conscience/You are my guiding light/You are my sunshine." Tommy told musicemissions, "This record is more of a joyful record. I'm a happier person after I've gone through this process. I reached a low point in my life and I think my music now reveals how I overcame that. This record is about feeling like I discovered something that's important to me."

On its release it received enthusiastic reviews with JesusFreakHideout commenting, "[The song] 'Sublime Currency' takes cues from Joy Electric and Queen with a catchy electronic rock feel, but then 'Hope Is The Enemy' comes on and turns it into a modernised new wave sound. Imagine Copeland and New Order fusing into one band and you've got some idea [of the sound]."

As usual with Abandoned Pools projects it was very much a product of Tommy's home studio. He told indierockreviews.com, "I don't play drums, so I do everything on my own at home and then go into a studio with an actual drummer (for this album Bryan Head and Daniel James shared the job). That's the way I made 'Humanistic'. 'Armed To The Teeth' was a little bit different. I formed a band to make that record, which caused a little bit of good tension between what was best for the song: my home production vs the live studio production. You can hear that in the song 'Rabble' which has the live drums enter at the bridge. Everything before that is my programming. I'm happy with working the way I did originally. It's easier to keep the sound of the album focused."

Abandoned Pools is currently following through with live appearances. Tommy explained, "I already have a live band and we've been doing shows locally. I'd like to do an extensive tour but it has to be under the right circumstances. My best experiences have been playing festivals. Usually it's just mayhem - large, crazy crowds. And the cool thing is you get to meet a lot of other artists. I'm not looking to get rich making music, I just like making albums. I've got a roof over my head, a great wife, so anything else is just a bonus."

When asked how his religion has influenced his work, Tommy replied, "I'm not going to be leading worship at a church anytime soon, that's for sure. But the core of the album. . . it's a Christian album at its core, and if you listen to the last record, it's not that at all, and it sounds just like some guy just flailing around trying to figure things out. So now that I have that solid ground, I feel that I have that solid core. So it's another reason why Tooth & Nail is perfect, in yes, there's a Christian core message, but it's also secular. It's not like I'm going out leading worship or singing gospel. The core is there, it's just not overt."

I always liked AP songs but the lyrics were a little caustic...but still I kept listening. I even bought a used CD in Oceanside in 2011 because it was nice to have a backup to online streaming(old school thinking... I know). Now I check back in to find that AP and Tommy are making cool spiritual music. Never say never! What a great interview. Remember we will all find out that "I and the Father are one" someday...