Addison Road: A girl-led band with the talent to become international stars 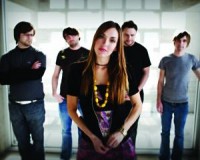 When Cross Rhythms radio selected for its playlist the wistfully memorable, female-led "The Only Thing" and the equally excellent "Yesterday" from the album 'Some Kind Of Spark' by Addison Road, the band were one of untold hundreds of acts releasing music independently and trying to land the illusive record deal. But now the undeniable quality demonstrated on their independent album has got this Texas band signed to INO Records, the Christian label responsible for such CCM big hitters as MercyMe and The Afters. Addison Road consist of Jenny Simmons (lead vocals), Ryan Gregg (lead guitar), Travis Lawrence (bass), Ryan Simmons (guitar, piano) and Jeff Sutton (drums). I asked Ryan Simmons to give me a potted history of the band. "It actually all started when Jenny and I met in college. We went to Baylor University in Waco, TX. Jenny and I met and started dating, and during that time we both discovered how much we loved music and began writing a little together. We were able to book some concerts at local coffee shops and anywhere else we could find around campus. We actually got ourselves in a little trouble because we got offered money to come and play a concert and told the promoter that we had a band. We had no band, but the prospect of a real concert that actually paid us money was too much for us to pass up! Jenny knew Ryan Gregg from church and quickly asked him if he would help us out. Ryan Gregg knew Travis Lawrence, who at the time had never even played bass before. We bought him a cheap bass from WalMart and he quickly learned the songs over the weekend. It all stuck and that was the start of the band. Jeff Sutton is from Georgia and joined up with the band about three years ago. The great thing about the band is that we all have some many different musical influences. That has really been so beneficial for us as we come together to write songs and make music together. We all really bring something different to the table and somehow it all comes together and works for us."

Those expecting the band's moniker to come from an obscure street significant only to the band members should note the group named themselves Addison Road "after a friend's baby." The group made their first recording, an EP titled 'Always Loved You' in 2005 and later that year they went into The Playroom studios in Wylie, Texas with producers Jon Meyer and Joel Cameron. The resulting album 'Some Kind Of Spark' is a delightful set of intelligent art pop brimming with catchy hooks, strong vocals and impressive instrumental dexterity. The composer of one of the album's highlights, "The Only Thing", Ryan Gregg spoke about the song. "'The Only Thing' is a very personal song to me but I think that it's written in a way that people can relate to the words and the feelings it talks about. I think we've all been there when you feel in your gut that there is more to life than the way you've been living. For me it was like a wake up call, I realised I needed to let more of God into my life because on my own I just kept falling again and again. And I think the coolest part of the Gospel is that it doesn't say you won't stop falling, but it does say Christ will be there to pick you up when you do. The song is about realising we've been given a gift in the love and grace God gives us. There's nothing we've done to deserve it and there's nothing in us that warrants being given such a great gift, but God does it anyway. So when the song says, 'the only thing that's good in me is you', it's a reaffirmation that it's only Christ who is good and not me."

One of the strengths of Addison Road is that they have more than one talented composer in the group. The band's other turntable hit was written by their lead singer Jenny Simmons. She said, "For me, writing a song can represent a lot of different things at once. 'Yesterday' was written during a time in my life where I was starting to grow up a bit and face the hard parts of life, like becoming a real adult, dealing with stress, love, money, morphing into this new creature with these new responsibilities. The song represented conviction and change on a lot of different levels for me. For the first time my marriage (to guitarist Ryan Simmons) wasn't the perfect honeymoon marriage. It was hard. I felt like he didn't get me or didn't understand me. He felt like I was losing it and freaking out about spending the rest of our lives together. We started to have fights, the one's that aren't always nice, where you don't remember that you actually love the other person, but instead throw your emotional weight of doubts, anger and dissatisfaction onto them. My good friend was experiencing the same thing in her marriage. Perhaps I freaked out a bit and started thinking about what marriage had been like and what it was turning into, and the thought of yesterday popped into my mind. Sort of a wake up call for me. . .like, 'Jen, what are you doing? Look where you were and what you have succumbed to, snap out of it!' At the same time I was really digging in deep to the Old Testament and I was amazed at how many times I kept reading the word 'remember'. I started feeling bad for God! This poor guy has lavished these people with promises and with provisions. He sends them manna, he delivers them to fruitful lands, he takes them out of slavery, he gives them prophets and kings like they asked for, he gives and gives and gives. And they keep turning their backs on him, keep forgetting about him or just blatantly reject him. But he never stops pursuing them and loving them and that, to me, is the story of my God, of the Bible, of my faith. . .a God who did not, and does not give up even when we chose not to remember or we turn our backs on him. He looks at the Israelites and he pleads with them - 'Remember, remember what I did for you yesterday, what I did for your forefathers,' that type thing. I just felt like the theme was hitting me from all sides. What happened to yesterday, not said in anger or bitterness, but spoken in the song as this wake up call for my marriage, for my relationship with God, and even with my parents for me to not abandon childlike love and faith and hope and memories and promises."

Since their inception Addison Road have been busy playing gigs large and small. Said drummer Jeff Sutton, "We have had the chance to travel all around the United States. Playing events all the way from Florida to California, Texas to Minnesota, and Boston to Oregon. In April of 2005 we had the opportunity to travel to Germany and Slovakia to lead worship for teens at a service project. During the two weeks we were there, we would help the teens build play grounds and such for orphanages and schools in the area, then we would lead worship at night. It was a great experience."

Now with the eagerly awaited release of their INO album set for February 2008, there will be plenty more touring opportunities opening up for Addison Road. Clearly INO are expecting big things for the group's US national debut. Explained Jenny, "We began writing in October of last year and almost a year later we have written over 100 songs for the album. So I hope at least one of those will be good and worth your listen! Continuing to be who we are and doing what we feel called to do is very important to us. We are often asked if we are a rock band or a worship band, but we cannot separate the two. We play our own music which may or may not be about God or our faith; a song may just be about life or it may be a prayer. We love rocking out and having fun shows that make everyone want to smile and move and sing along. We also love leading people in worship. There is something truly humbling and awe inspiring to stand on the stage and lead people into God's presence. To sense it in the room, to know that we are invisible on stage because we are being overshadowed by something Holy and majestic, it's pretty amazing to be a part of. It's incredible actually. So we want to continue to do both, to be who we are, worshippers who also love art and music and guitar tones and catchy melodies and tripped out drum beats and who love being goofy and being on stage and meeting people and pouring into people's lives. That's us. We are excited about where we are right now because we see that God has given us a platform to not only do what we love, but to be a small part of the change. To give back, to encourage people to use their wealth and talents to help the many in our world who are suffering in horrific ways, to encourage spiritual growth, to encourage people to love life and love people - that's a pretty cool place to be. And let's be honest, we can't wait to come play in the UK."

Hello, I was nominated to be apart of my youths newspaper committee team and I hold the positon of Music. I was wondering if anyone knows what type of music does Addison Road Play? Rock, Hiphop, Pop? If anyone knows and can answer this question before the 20th of August feel free to email me at linda_yeah1@yahoo.com Thank you! God bless.

I have not had the pleasure of meeting Addison Road, but my boyfrined got a free download form iTunes and picked out the song 'All That Matters'. It is one of my top favorite songs now and I will be getting an authographed version of the CD when it comes out.

Addison Road visited Germany when my family and I were stationed in Heidelberg....they provided a free concert to the military community.....they were great!
Would love to see them in concert again soon...

I have had the pleasure of meeting Jenny and Ryan, and I love their music, their energy, and the way God shines through their ministry. I am thrilled to see their music reaching so many, and I look forward to their new album. Addison Road will soon become recognized by everyone who appreciates good Christian music.