Al Denson: The Texas-born CCM star playing in the UK

In America AL DENSON has recorded eight albums, been featured on the cover of CCM magazine and is a Christian music star. In Britain he's not. Despite that, in November 1994 he slipped quietly into Britain to play his first ever-British gig. Mike Rimmer was waiting for him. 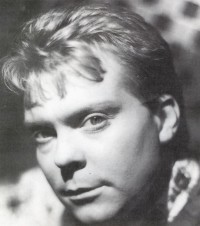 Let's start with a joke! What do you call a mushroom who buys you drinks and tells jokes all night?... A fungi to be with! (Fun guy - geddit?) That's probably the best way to describe Al Denson! Jet-lagged and sound checking, he laughs, banters, makes up songs about a Nelson Word exec. It is non-stop! Clearly, to be Mrs Denson probably requires great fortitude!

I am not entirely prepared for this! This interview will also be used for radio, so Al delights in adding his own special ambience by slurping loudly from a can of Lilt and immediately mimicking my until now unselfconscious English accent. It's only when Al takes the microphone and starts interviewing me that I realise I could be in serious trouble. So is he a practical joker? "If you don't laugh during the day then something's wrong!" exclaimed Al. He described his favourite practical jokes which are too complicated to explain here but beware if he ever asks you to collect his bags at an airport!

Time to get serious. Raised in a Christian home in Texas, majoring in music at college, his long overdue first appearance in Britain is to herald the British release of his album 'Reasons'. Where did the idea for the album originate? "I was flying on an airplane with a guy," explained Al. "After talking with him for a while, I asked him if he was a Christian and when he said he wasn't I asked why. He said, 'I know too many Christians. I see the way they live and if that's what it is to be a Christian I don't want it.' I walked away and I thought, 'I'm going to call the record 'Reasons' and I am going to put 10 different songs on it that are 10 different reasons why I believe a relationship with Christ is the answer that people are looking for."

One of the songs which is destined to become an epic is "Alcatraz" with its opening chase theme, complete with dogs barking. I asked Al about the song. "It's a different way of trying to explain the cross," he enthused. "The key to 'Alcatraz' is that if you were in prison somewhere, God would love you enough that he would come and let you out and he would take your place. If you were a sinner and due for the electric chair or gas chamber, he would go there for you because that's how much God loves you. It's trying to bring the crucifixion up to a 90s version."

Denson lives in Dallas, Texas with his wife Tracey. Although they've been married for seven years Al jokes that they haven't any kids yet because his wife is scared they'll grow up and be like him! He says being away from Tracey is not easy - "Life on the road is definitely hard." Even with the personal sacrifice, Denson enjoys playing live. "It's exciting seeing people get honest before God and decide to sort out areas of their lives that they should have done a long time ago."

Clearly he has a heart to reach young people when he says, "The toughest time of my life wasn't when I got married or when I was in kindergarten, it was in high school and college. Tough times and I can still remember what it was like." Al's live concerts are aimed at young people. They are high energy and good fun. He is proud of the fact that this shows helped pioneer the use of video material in CCM but it is not all razzamataz. His concert ministry is backed up with literature and counselling. I wondered at the motivation for this.

Denson describes a conversation he had with his father. "He said to me, 'Son, if you're going to go out and sing to kids, don't be a hand grenade thrower. You fly into the city, throw a hand grenade, wave at them and walk out and let all the other people pick up the pieces.'" That advice caused Denson to think seriously about how he ministered in concert.

"We're not really just talking about knowing God, we're talking about a relationship with God. There's a huge difference. To do that you have to plug into a local church, grab hold of friends and you have to pray and read the Bible. So we give those who respond a copy of the Bible and in the back of the Bible I've given answers to top questions people are asking." This is no small time operation; on the last tour he gave away 185,000 Bibles to people attending his concerts. In addition to the literature and Bibles given out at I concerts, there are trained counsellors to help those who are responding and even after Denson leaves town, teenagers can get help because he has established a national telephone counselling service. This gives pre-recorded answers to the most common queries as well as access to live counsellors should the caller need someone to talk to.

One of the grooviest songs on the 'Reasons' album is "Stand". I asked Al to tell me about that song. "We as Christians need to take more of a public stand. There are so many different things that go on in our world and we as Christians run to our churches and we murmur about it in our churches but we are afraid to really venture out. I would like to be someone who encourages the church to go for it. Let Christians go ahead and make a difference in their community. Once we impact our community, we can impact a city and then our nation and the world. We need to honestly show people the love of Christ and pay more attention to things that go on around us."

Al Denson & his staff; all those guys are really nice. He's done a lot of decent songs over the years; & his show is cool; too. By the way; is there a way to still get the "Reasons Tour?"