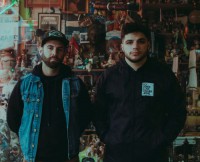 The label Facedown Records, out of Fallbrook, California, is something of a legend within the Christian rock scene with their continuing stream of metalcore, post-hardcore, punk and alternative rock releases. They may never have reached the sales heights of Tooth & Nail but have successfully navigated the turbulent waters of the music industry since 1997, and in the process released a heap of critically-acclaimed albums by xDEATHSTARx, Nodes Of Ranvier, Comeback Kid, For Today, A Plea For Purging and many others. Now they are once again doing what they've done so consistently in the past - taking a relatively unknown independent band to hopefully national acceptance.

I asked Jesse how American Arson came to rise from the tens of thousands of unsigned acts to land a deal with Facedown. He explained, "I saw the email pop up from Jason [Dunn, the founder of Facedown]. He emailed us, 'Hey, we're interested. Talk more about maybe working something out in the future.' I called up Evan like, 'Whoa! We've been massive fans of Facedown for years.' The bands we have been influenced by have come from the Facedown family. At first I thought it was maybe just he caught wind randomly, but then I thought back, 'Actually, I sent an email to them over the holidays just introducing ourselves and sending out some of the stuff we had been working on recently and saying we'd love to work with them in the future. I looked back in my emails and I'm like, 'I did do that!'

"So we messaged them back. We had been working on the EP that just came out, 'Rise & Fall'. We already had the album printed and ordered - we had a release date set - and he goes, 'When you get the final mixes in, send them over. We'll talk about something in the future.' So we sent him over the mixes, and he emailed back right away and said, 'Let's do this as a Facedown release. Let's hammer out some details for signing now.' We didn't hesitate - pretty much like, 'Yup!' That was about it. We love Facedown, we love everything they're about. So many incredible artists have come out of there, and we've had the chance to play with a couple of them. It's a perfect fit for us going forward, and it's where we wanted to be."

American Arson are hard to put into a stylistic box, though they would admit to being on the hard end of music. Said Evan, "Most of the stuff we do is singing, then sometimes we do some spoken word. Sometimes we do some over-driven spoken word: a shouty-type thing, like the deep, metal growl." Jesse added, "The first recording we did was pretty in-your-face. Most of it was pretty raw. Since then we expanded the things we do. So maybe we go a little bit lighter, a little bit harder, to explore the different avenues of the sound that's available to us, because that helps you avoid getting stale." 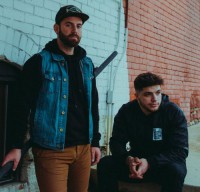 The duo play all kinds of gigs. Said Evan, "There are shows where we are the heaviest act there, then there's a lot of shows where we're the softest act there. We play with Christian artists, we play with secular artists; we play at Christian festivals, secular festivals. Our stance on it is that we'll play in front of whoever wants to listen to us. If it's somebody who wants to hear our music and let us share our story, we feel like that's a privilege regardless of those people's backgrounds. We did make it out to California a couple summers ago, and I think we found as much variety there as what we're experiencing here at this point, which is that homogenisation of the music scene which has a lot to do with the internet: people have access to more music. When I was growing up we had that regionalised genre flavour depending on where you're at. In the Mid-West - Detroit, where we're from, and the surrounding states - there are definitely certain styles that go over better in certain areas. Sometimes we'll make a set-list based on the audience we think we're going to get for that particular show. If we're playing with a bunch of metal bands, we'll probably play our heavier stuff; if we're playing with a bunch of pop-punk fans then maybe we play the stuff that's a bit more melodic."

Their Facedown EP is called 'Rise & Fall' and with a rather surreal attitude to song titling, they've called the three songs featured on it "Rise","&" and "Fall". American Arson write songs they describe as "thematic and cohesive", which sets the tone and flow of their music. "You feel like you're listening to a collection of music rather than one-off singles that aren't connected to each other," Evan said.

In 2018, the duo took an eight-month hiatus to deal with their own personal agendas; Evan was moving house and also had his wedding to focus on. Evan explained, "We wanted to make a comeback release - not a full release but just to reintroduce ourselves. This concept of rising and falling, succeeding and failing, we can all identify with. I think there's a lot of music out there now that explores the lowest of the lows, and there's a lot that explores the highest of the highs. I wanted to make something that felt real and what I go through daily, just struggling and succeeding - having a high-high and then a low-low, whether spiritually or personally. It's this idea of the human struggle, where we keep getting knocked down, and we keep getting back up.

"Everything I write lyrically, I want it to accurately reflect my life - just write honestly. Those extremes never appealed to me - the highest highs and the lowest lows - because they don't seem representative of the things we as humans go through on a daily or weekly basis. Things are constantly up and down. That's what the whole thing was about, the theme of the EP as a whole."

American Arson have no tours planned in the near future, however they are performing at some festivals throughout the summer, including Audiofeed, Canyon Music and Excellency Music Festival. Jesse commented, "We've covered pretty much every corner of the US multiple times. We haven't been out of the US with this band yet, though we've started to see some more momentum in areas like the UK and Australia. We would absolutely love to get out there if the opportunity arises. We both work multiple jobs while we're home, so we stay pretty busy. But we'll play for anyone who will listen. If that would be here in Michigan, or in Australia, or in the UK somewhere, we would have to pick up that opportunity, but there is a level of having to find that balance. The band isn't our full-time income, so we can't just say yes to everything on a whim. We have to take into consideration the financial implications that come along with that - see if any opportunity we get would be beneficial for the band in terms of seeing some sort of return."