US teen pop group JUMP5 talk to Tony Cummings about music with a message, reading Hebrews and not feeling stupid. 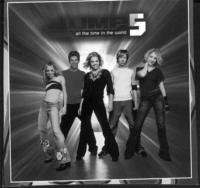 In this modern age where children are hardly allowed to get out of rompers before they are bombarded with exhortations to buy the latest pop sensation America's Jump5 are a breath of fresh air. They may be relative musical lightweights but the infectiously funky pop music produced on their second album 'All The Time In The World' is a positive antidote to the tat so often thrown at teen pop buyers.

The Jump5 story began early, real early. That was when two year old Brittany Hargest and four year old brother Brandon met four year old Lesley Moore at dance class. In time, they were joined by Libby Hodges and Chris Fedun on the talent show and recital circuit. Having formed fast friendships, it was only natural that the talented teens of Jump5 would create a group of their own. Only this would be one teen group with a twist. "All along," recalls Brandon, "we wanted to do more than just entertain people; we wanted to help them too." That commitment to positive values has separated Jump5 from other teen groups, too many of whom mimic the inappropriate sexuality of older artists. "Kids are exposed to so much that's bad," says Libby. "Many artists dress too provocatively, exposing themselves just to get attention. Too few out there have a positive message like ours. But kids and parents appreciate what we do."

So much so, the group quickly expanded, taking their upbeat message to schools, malls, concert halls and amphitheatres. In 2002 they were welcomed into the White House when President and Mrs Bush hosted a night of music. "We never get nervous normally, but we did that time," laughs Chris. "After our performance we got to talk with the President and have our pictures taken with him."

The demands of constant rehearsal, recording and performing means the kids receive home schooling together. But that's just fine with the five student body members at Jump5 High. Says Libby, "Our teacher is awesome, but she is hard." Adds Lesley, "I went to public school for most of my life, so this is a major change. But I'm having so much fun and so is everyone else in the group."

Jump5, as any of their legion of fans can tell you, consists of Brandon Hargest (15), Elizabeth Hodges (15), Brittany Hargest (14), Christopher Fedun (17), Lesley Moore (16). The group's self-titled debut album was a big success on American Christian radio and even broke into the mainstream via Disney.

Isn't there, I ask Libby, a danger that as Jump5 pursue mainstream exposure their Christian message will be watered down and they'll just be another of those teen groups giving us messages like "let's all be happy"? Libby responds thoughtfully, "I think there could be a possibility of our Christian fans thinking that, but that's definitely wrong. We want both Christians and non-Christians to be able to enjoy our music. We want it to be music that everyone can take in their different ways. The great thing is, if someone doesn't know the Lord personally there is nothing bad in our music to influence them in any bad direction. It's nothing but positive lyrics."

For the moment though, the young group's Christian faith remains hugely important to them. Libby speaks about a recent Bible study she had: "I was reading in Hebrews and what stood out to me was Hebrews 3:7-8. What it said to me was that if you hear Jesus speaking to you, listen to his voice and do what it says! If I am ever getting tempted and hear that voice, I should run away from that temptation and listen to that voice."

Is it, I ask, possible for a group so young to convey anything of spiritual depth to their audience? Libby replies candidly, "I think people in their youth have many things to say about Christian life. But I do think that people who are older might have a better grasp on the answers, because they have had time to find them. We had a road Pastor come with us on the last tour. It was great having someone to talk to. Our tutor is also a former youth leader. Between the two of them, we learn a lot and can ask anything and not feel stupid. Being just kids we still have a lot of questions. We have devotions and we have studied Romans. Writing in my journal, having quiet times and being able to talk with my friends also help me stay close to God."

The months leading up to Christmas were the busiest of their young lives. In a few hectic months they have seen the release of the 'All The Time In The World' album, a video single, a tour of the USA and a Christmas EP, 'All The Joy In The World'. The group have also been featured prominently on Disney's DVD release this fall of the animated classic Beauty And The Beast. Jump5 have newly re-recorded the title track, made famous in the early '90s by Celine Dion and Peabo Bryson. The song and a stunning video version are included in the Disney DVD package, introducing the hit song to a new generation of viewers.

For more on Jump5 visit the Jump5 artist profile