Mike Rimmer reports on the new trend and brings the low-down on six hot American acts, FOSTERSTHINKING, BLOOM, LESS THAN SEVEN, SALLY ANTHONY, THE ECHOING GREEN and FLOORED who are bringing their music to the public via the internet.

Mike: If you could play your songs at a dinner party to any six people in the whole world, who would you most like to invite to hang out and listen to you sing?
Sally: "My husband, Tony, because he has been such a great support to me. I'd invite Ruth Bell Graham because she has taught me so much about Christianity and God's word. Ani DiFranco because she has been such an influence on me musically. She has encouraged me to be honest and just be what I am. I am so amazed at all she has done. Ani is a producer, writer, singer, musician, activist, businessperson and engineer. Dr Timothy Keller would be on my list. He is the pastor of Redeemer Presbyterian Church in New York City. He has intellectually taught me so much about Jesus. God has used him in my life in such a powerful way. I would invite an abused child, to remind me that what I do is only important if I am helping people. It would also remind me that what I am wearing or if I sing a little off key, does not matter. Lastly, I would invite a fan, because they put you where you are. Tony would probably be the only one to show up though, because none of these other people know who I am!"

Mike: How would you sum up what you believe God has caned you to do with music?
Sally: "The calling I feel is largely to the secular world. I don't feel called to sing in churches really. I feel called to help children and those who hurt. I am not afraid of people. I hope people feel that they can tell me anything. You find those people everywhere, not just at church. I'm open to whatever God calls me to. I just want to make sure that it is God calling me and not my own desires."

Mike: Was it glamorous attending a film premiere when your song was on the soundtrack?
Sally: "Sure, other people were glamorous! I don't think that I am so glamorous. I felt like I should have been tearing ticket stubs or something. Tony and I took a cab, not a limo, and were dropped off across the street and not on the red carpet."

Mike: How long did it take you to decide what to wear?
Sally: "It took me about two days. I went to all of these fancy places to find a one of a kind outfit, but I ended up with a long black skirt from Banana Republic and a shirt my brother-in-law gave me for Christmas. If there are any designers out there who want to dress me, give me a call!"

Mike: What's the best one word poem you've ever heard?
Sally: "I'm still looking... If you have any suggestions, my email address is info@sallyanthony.com!" 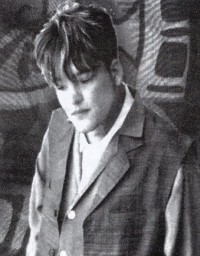 They told me that the foyer at the Gospel Music Association was the place to meet people but for me it keeps happening in the lifts. I am hoping to meet Joey Belville from the Echoing Green but as I've discovered, no one looks like their press photos. I even walk past Amy Grant without recognising her. Ho hum. Then I am in the lift with two guys. Absent-mindedly I glance at the nametag and it says Echoing Green. Excitedly I say to the guy, "Hey! Where's Joey?" The guy nexts to him leaps to life and shouts, "You must be Mike Rimmer!" It's hugs all round!

So that's how I get to hang with Joey Belville for a couple of days and the new look Echoing Green. For years the band has been perceived simply as a vehicle for Joey but things have been changing. He explains, "Over the last year or so, it's been more of a group effort - which is what I have always wanted from the beginning. The Echoing Green has become a real band instead of just Joey. We've been not only playing but writing together - which has been a very exciting step for us."

In a coffee bar in the Renaissance Hotel, Nashville I meet the other members of the band who are drummer Dave Adams and singer Chrissy Franklin. Joey explains that Chrissy originally started in the band just singing backups, "but somewhere along the line we discovered that she's a great lyricist as well as singer. So along with collaborating with her on lyrics, we've been pushing her vocal parts a little more to the front of the songs. In our latest song Thief she actually takes the lead vocal on the verses... We think that's just the coolest!"

The Echoing Green have been signed to a variety record companies. But now they're functioning as an independent. Joey explains the difference, "One of the problems is that, unless you're quite rich, you don't have the big marketing budget that labels do to let people know about your record. No poster, magazine ads, etc. Some of the good points are being in complete control of your art and ministry and it's a lot easier to provide for your family when you're earning $6.00 from that $10.00 disc instead of $0.80 from that $16.00 one."

When it comes to marketing Joey acknowledges the power of the internet. "I think it's wonderful!" he confesses. "The internet has done wonders for The Echoing Green. But the most significant thing it has given to us is direct contact with our listeners. It's really a blessing to get an email from someone who was ministered to by a certain song, or an email from someone who wants to know the insight behind certain lyrics or whatever. Making ourselves accessible like that dissipates any kind of 'rock star' preconceptions, and shows we're real people - which we are!" For years Joey has always been perceived as a dance guy but listening to the music, it always struck me that he's more Duran Duran! He laughs, "Here in America - if you have a drum machine going in your songs - you're a dance or hip hop act. Just look at our Dove nomination from last year - best 'Dance/Hip Hop/Rap' single. The song ("Hide") wasn't any of those. But it doesn't really bother me - it makes me laugh."

Joey continues, "With the exception of our first album, we've pretty much always been on the electronic/pop/rock side of things. We grew up listening to Duran Duran, Depeche Mode and New Order and it shows." So what's so great about '80s music I observe, you seem to be really into it! Without skipping a beat Joey responds, "Big keyboards and big hair is really what did it for me." He laughs again, "Although my hair is more weird than big."

Spiritually he describes the band's vision, "I think from the beginning God has called us to be 'medics' with our music. By 'medics' I mean making music addressed toward the hurting, the broken and the hopeless. Obviously, we've made songs that dealt with different topics, but our cause remains the same.

I ask him to describe "Thief", his favourite song on the "If I Could" maxi-single. "I approached Chrissy with writing a song that deals with time. Putting more emphasis on the negative aspects of time, we refer to it as a thief. After all, time steals our thoughts, our memories and eventually our lives. When you look at time like this it's very easy to get a little depressed about it, but when we realize that we serve the God who created time, defies time and can dismantle it in a single breath - we find hope and comfort. God is so very eternal and infinite - I'm grateful to serve him."

In addition to the single, The Echoing Green have released a stripped down warts and all live album, 'Glimmer Of Hope' which has captured the band in an unpolished "real" setting. I ask Joey about it and he jokes, "I don't know what you mean by 'warts', but I can assure you that The Echoing Green is, for the most part, wart free. Although Dave did have one on his hand last summer, but he got it removed. As for the live album - we really felt that it would be cool to offer our fans a live album for the simple fact that we sound so different live than on CD. Our live show is much more aggressive with live drums, guitars, keys, etc, and I think that's great. We really want people to come away from our live shows feeling like they got something special, not like they just heard the CD played really loud in front of a crowd."