Andi Hillman: An Australian worship songsmith with the radio hit "This Moment" 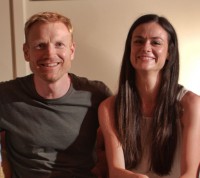 With literally thousands of new worship songs from all around the world bombarding the church-going public, the only ministry making a concerted effort to find the very best (that's Cross Rhythms, if you didn't know it) recently introduced its listeners to Andi Hillman. Andi is from Melbourne, Australia, and deserves accolades for making it to the Cross Rhythms playlist for his beautiful single, "This Moment (ftg Rebecca Fielding)". Cross Rhythms tracked the singer/songwriter down to get his story.

Tony: Were you surprised to find a radio station in England putting you on its playlist?

Andi: "I was, yes. It's a nice, pleasant surprise, to find stations from other countries getting into our music. I've had one station in America play my music, but other than that it's just been locally in Australia. Our local Christian station here in Melbourne is called Light FM, and they've been playing 'This Moment' on their Sunday morning show, Sunday evening show and throughout the week on their digital channel."

Tony: Tell me a bit about yourself, Andi.

Andi: "I was born and bred in Melbourne, Australia. I'm 39. I became a Christian when I was 20. My dad's a pharmacist and my mum's a teacher. We grew up going to church, and then during my fairly dark teenage years, I kinda turned away from the church, exploring the world so to speak."

Tony: So what were the fairly dark years? Chasing women, getting drunk, that kind of stuff?

Andi: "Yeah, all of the above. Got into New Age, knew some people who were into the New Age movement. Got involved in all kinds of spiritual things, when I was about 20. I just didn't want to be in this world anymore, I was fairly suicidal. But then I met Jesus."

Tony: What were the circumstances that led to you giving your life over to the Lord?

Andi: "I was just at the end of my rope, so to speak. Resting on my bed one night, bawling my eyes out, overcome with overwhelmingly negative thoughts about myself and about the world. The two words 'Jesus saves' came into my mind, and I just said, 'Okay Jesus, if you're real, show yourself to me.' I just had a real encounter with the Holy Spirit. Started with my head and went down through my body. Just felt peace and love and connected. It's the first time I'd ever felt that way. So I gave myself to the Lord and said, 'Alright, teach me who you are and I'll follow you the rest of my days'."

Tony: When I had a not dissimilar encounter many years ago, I wanted to devour the Bible, really get in amongst it. Was it the same for you?

Andi: "Actually I was doing a sound recording course at the time, here in Melbourne, and I pulled out of that three quarters of the way through. I discovered the Bible, and thought that was more interesting than the sound engineering course! Definitely got into the Word."

Tony: What churches have you been involved with?

Andi: "I stayed with the family church for about 10 years, then I took a pastoral role at another church here in Melbourne, called Warrandyte Community Church. I was a pastor there for five and a half years, and then went to a mission organisation called OM. We've been exploring global missions but from a local expression, we started a church plant 12 months ago."