UK-born, USA-based flautist ANDREW J BOOTH makes a visit to the UK in April when he appears at Spring Harvest. Tony Cummings threw some questions at the busy musician. 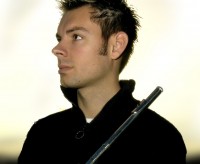 Andrew J Booth is a flautist of consummate skill. When Cross Rhythms reviewed his 'The Rest Liturgy' album our reviewer called it "a rarity to savour." This classic of meditative mood music is now released in the UK through Authentic and with Andrew lined up to play at Spring Harvest this seemed like an excellent time to track the busy musician down in his Indiana home.

Tony: Can you fill me in on the details of your life?

Andrew: I was born in Birmingham but was raised in Llanelli, Wales. My Christian faith has always been important. I don't remember one specific "salvation moment", rather it has been a journey of trying to say "yes" to the call to follow Jesus at a deeper level. My church background has been diverse being part of an Anglican Church, a non-denominational church in Cardiff, working as an intern for the Barn Youth Church in South East London and then leading worship at an Elim Pentecostal church while at university in Huddersfield. I am currently based in Fort Wayne, Indiana and work as part of the leadership team for a non-denominational church that had its roots in the Vineyard movement. I am married to Trisha and have two sons, Jacob (3) and Eli (1).

I began playing the flute when I was eight, although I would have started 18 months earlier had my arms been long enough! Before that time I was taking guitar lessons and really struggled with it, but I found the flute came naturally. I would listen to my Mum and Dad's records of flute music and found that after a couple of months I could play along. As well as playing "by ear" I took classical training all the way up to grade eight and advanced studies. I had always wanted to play the piano and so my parents bought me a little Casio keyboard and I would bang out "Shine Jesus Shine" for hours on end! I began writing music for my A level project. The first piece I wrote was called "Wings Of Eagles" - it became the title track for my first album.

Tony: What albums have you recorded prior to 'The Rest Liturgy'?

Andrew: In 1997 I recorded 'Wings Of Eagles', a very raw, early project that included a Christmas carol medley and a piece based on Psalm 22 and the crucifixion that Rob Lacey performed on. Then in 2001 I did 'A New Dawn', a fusion of styles including classical, Celtic as well as the music composed for my wedding. It received good reviews, but did not hit the mainstream market.

Tony: Instrumental Christian music is an interesting subject matter. Why are people attracted to your music and what would you say is a typical Andrew J Booth listener?

Andrew: One of the reasons I wrote "The Rest Liturgy" is because I felt that there was a need for original instrumental music that would lead people, whether Christian in background or not, to a place where they could experience peace and God's presence. Much of Christian instrumental music in the past has simply been instrumental re-workings of familiar songs. Although there is a place for that I felt called to do something more original and dynamic. Since composing "The Rest Liturgy" the music has been used in salons and spas, in business meetings, in large conferences, even as music under local TV weather! Although it is entitled "The Rest Liturgy" it was not designed to send people to sleep, however I constantly get letters from people who tell me that they have been struggling with insomnia for months and by listening to the CD before they go to bed they sleep soundly. I am not sure there is a typical listener to "The Rest Liturgy". The music seems to cross generational lines. Because of the ambient textures many young adults have bought the CD, however because much of the music has a Celtic flavour to it many older people have connected with it also.

Tony: What does the J stand for?

Andrew: Jonathan - my middle name and my Dad's name.

Andrew: My music influences have been shaped largely by movie soundtrack composers including Hans Zimmer, Harry Gregson-Williams and James Horner. I have also been influenced by the Celtic music of Iona, David Fitzgerald and Davy Spillane.

Tony: Did you know that James Galway is now a Christian?

Andrew: I didn't know that. I have met James Galway once and I think my Grandma is in love with him! I heard an interview with James Galway on national radio in America recently. His passion for music makes him a great ambassador for the whole industry. He has incredible ability to maintain a sublime tone throughout the full range of the flute's registers. Listening to his CD while I was learning inspired me to keep practicing and persevering.

I have just returned from 'Flames of Fire' 2008 (New Wine Cymru (Wales) where Andy was the worship leader. Wow! He did a 'soaking' session which lasted about two and a half hours, although I had to leave after one. It passed like 5 minutes! I have never known anything like it - the local supporting musicians were amazing; they could play anything, in any key at any time (Andy's comment!).
He also gave a seminar in which he talked - yes, he does that well too! I could rave on for ages. I came back with his 'Rest Liturgy' for my own soaking sessions! Awesome.

Andy is an amazing guy and I love his family! I go to his church and never realized he was so "famous"! At first I just knew him as a nice guy with some kind of UK accent, but as I got into youth group and listened more often I heard some amazing things and hilarious stories (Andy and his wife Trisha are really good at telling stories!) I also feel cool about having met his mom, his wife's sister and their family.

My mom loves telling this story about my little brother: When Craig was five years old, he loved A New Dawn so much that he wouldn't go to sleep without the "Andy music".

I have just returned from Spring Harvest 2008 wk 3 Skegness, where Andy Booth and Sue Rinaldi were the worship leaders. They were fantastic.
Whilst there I went to a concert given by Andy Booth which was absolutely superb. He played flute, various whistles and keyboard and treated us to some of his latest compositions. The evening was very laid back and relaxing and he came across as a very likeable and unassunimg young man. A rare talent indeed.