Andrew Osenga: From The Normals & Caedmon's Call to acclaimed songsmith

The airplay that Cross Rhythms have recently given the song "The Ball Game" and "Wanted" by American singer/songwriter Andrew Osenga finally brings into the British spotlight one of the most underrated singer/songwriters on the whole US scene. During the late '90s and early 2000s Andrew, from Normal, Illinois (about two hours south of Chicago) toured the US with an exceptional acoustic pop group (named, not surprisingly, The Normals). Andrew grew up in the Church. He said, "I can't really say there was a moment when I started believing, I always have. In high school, though, I started to really learn about my faith and discovered the theology behind what I believe. Incidentally, that theology was somewhat different from that of my family, and slowly theirs is becoming more like mine. There is such a wide range of beliefs that all fit within the death and resurrection of Jesus, it's tempting to think you can figure it all out, but I'm realizing now that will never happen, and I'm glad. It means we'll always be discovering new things about God."

As the three albums for Forefront - 'Better Than This' (1998), 'Coming To Life' (2000) and 'A Place Where You Belong' (2002) - demonstrated, The Normals were far from normal. Their melodic, skilfully crafted compositions bring in comparisons from reviewers with everyone from PFR, Jars Of Clay and Caedmon's Call. Andrew recalls is days with The Normals with warmth. "I was one of five guys in that band and they were my closest friends. We and our small crew travelled all over America in a 15-passenger van for four years, and we got to make music we really loved.

"I've played with a lot of different artists and I'm just now seeing how rare it is for musicians to get to the place where they make the music they really enjoy, the kind of records they themselves would listen to. We were really lucky to be in that kind of band, and to get to work with Malcolm Burn, our producer, was the icing on that cake. He had done records with Peter Gabriel, Emmylou Harris, Daniel Lanois, Bob Dylan. We learned so much from him, about passion and abandon and really grew to see how our friendship enabled us to really take risks with our music. We were always broke and always watching people around us get really successful while we never did, but looking back on it I don't see any of that, I just see our friendships, and I'm incredibly grateful."

After The Normals disbanded Andrew spent five years with CCM hitmakers Caedmon's Call. Explained Andrew, "I was initially just filling in when Derek Webb left, until they could find a replacement, and I just sort of never left, even though Derek eventually came back. They're a great group of people, they've all sort of grown up together in a way, so it's sort of like I got adopted or something. I've been very lucky to get to be in two bands whose music I enjoyed and whose people I really loved." 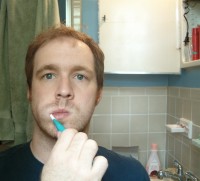 Now Andrew is getting a growing reputation on the wonderful worldwide web as a solo singer/songwriter par excellence with his 'Letter To The Editor Vol 1' EP, available for download, getting to thousands of discerning music lovers. Explained Andrew, "I recorded it in my basement in the span of about a week and a half or so. Money was tight and a friend suggested I record some new songs and put it out quickly to help out. I had just spent a few months writing the Caedmon's 'Overdressed' record and was out of ideas, so I asked people on my website to send me theirs. I was quickly overwhelmed with the response. People sent me lyrics, poems, photos, stories. . . I spent a few days swimming in these and then really quickly wrote and recorded the tunes. Mostly the final recordings were finished within a few hours of sitting down to write the song. I had never worked that quickly before, and I should have, because it's the project I'm happiest with, strangely enough. With that pace you get a sort of whimsy, a free-spiritedness that longer, more 'important' studio albums often lack. But music is about freedom and that's what the EP turned into. I think it's really changed how I see myself as a musician and writer, in a great way.

"Also, I had a couple of rules for the record. No picks, only one acoustic guitar per song (though I could use it as many times as I wanted) and only my voice (but again, as many layers as I wanted). I wanted to do something like an orchestra, instead of one instrument playing a bunch of notes, have a bunch of instruments each playing their own melody that ends up defining the rhythm and the chord in a more beautiful way. It was a great experiment and is something I look to do more of in the future."

The songsmith spoke about his turntable hits. "'The Ball Game' is an involved song. It's about me and how I feel I'd sort of given up some things I really feel I was created to do, musically, relationally and otherwise. The song uses the stories of me wishing I could play basketball back in high school and the history of The Normals. Life is short and I don't want to feel like I've wasted the time and opportunities I have. A bit of a carpe diem tune, I guess. 'Wanted' is a real-life love song. Not the kind of love song where everything is happy but the kind that talks about love being a choice and an action as much as a feeling. We all have a desperate need to want someone and to BE wanted."

For the future Andrew is really looking forward to "diving more into" his work as a producer and studio guitar player as well as firming up his growing reputation as a singer/songwriter. He said, "Career-wise, I hope to step out of the shadow of Caedmon's a bit in the next couple of years and really give it a go as a solo artist. My work as a producer and a studio guitar player is something I really enjoy and have been doing more and more, as well."

I can't vouch for Andy O enough. I kinda discovered him via Caedmon's and from downloading the demo's and drawing board tracks from the website imediately got the feel of things.
Got to see him live last May (along with Caedmon's but he did a few of his). Caught him briefly in the hotel lobby next morning and tried to twist his arm for a UK.

One of the best things about Andy's songwrting is how well it transposes from the studio production to the live intracicies of just a guitar and his voice or two.

Cheer CR for pluggin him, hopefully we can get enough support to make a UK tour viable.