Andrew Osenga: The singer / songwriter emerging from The Painted Desert 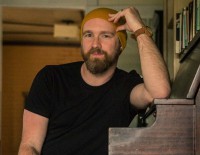 Andrew Osenga is a record company executive with Integrity Music. His name, though, will be recognised by long-time followers of CCM history as a one-time member of The Normals and Caedmon's Call and, more recently, by Cross Rhythms radio listeners as a fine solo singer/songwriter who has received considerable radio play for his songs "The Ball Game" and "Wanted" (2007) and "Set Me Free" (2014). He was in Britain recently liaising with Integrity's UK arm, but I caught up with this gifted songsmith, producer and session guitarist in Nashville, where he lives with his wife and three daughters. I began by talking to Andrew about his Cross Rhythms radio hit.

Tony: Your song "Set Me Free" got me thinking. Although we believers have felt the chains fall off, to some degree we do seem to have a habit of crawling back into our own self-made prisons. Do you think that's a true observation?

Andrew: Oh, yeah. That's Paul in Romans: the things I do I don't want to do and the things I want to do I don't. Hopefully, in the life of a believer, every year you're a little bit closer to who you're made to be, a little more free. So you keep on discovering new things to let go and new things to look at. That song came out of one of those where you find another one and you're like I thought I beat this thing and it turned out there was this other thing underneath it.

Tony: That song was from a series of EPs. Tell me about the series.

Andrew: It was four EPs, called 'Heart', 'Soul', 'Flesh' and 'Bone'. I love a lot of different kinds of music and I thought it would be fun to go deeper into some different styles of music that I hadn't done as much of before, but really enjoyed playing. So the first one was super folky; the second one, 'Soul', was soul and blues - "Set Me Free" is from that record; the third one, 'Flesh', was sort of '90s grunge - the stuff I grew up with but I was never in a band that actually played it; and the last one, 'Bone', is all ambient instrumental.

Tony: You've been working for a while with Christian record companies. Tell me about that.

Andrew: I worked at Capitol Christian Music for a couple of years; that ended about two years ago. I went back into the studio and back on the road; made a record. And then four months ago I started a new label job at Integrity Music. I'm a director of A&R there. I get to hang out with a lot of British folks and spend some time over in Brighton. It's a real joy, a lot of fun. There are some amazing people; it's sort of a rebuilding phase. They invited me in to help, encourage and mentor a new group of artists. That's my heart and I'm grateful for the opportunity.

Tony: It didn't strike me that you were first and foremost a worship leader, but Integrity is very much a worship ministry company. Is it a slightly strange fit?

Andrew: It's interesting because professionally I've never been a worship leader. I lead worship at my church, a ministry I'm active with called Yamurai. I've done a lot of worship leading but never put out a worship album or done anything like that. I've wanted to keep that separate. If I'm going to lead worship I want it to be with people that I know. I've learned a ton just spending time with people who are leading worship and writing these songs day in day out. It's been a real gift to me to learn from these folks and I think that people at Integrity wanted somebody around who spoke a little bit of a different language and who could maybe see things from the outside, a little bit. The younger generation of artists and writers seem to approach worship songs and other songs a little differently. People my age tend to say here's my artist's album, here's my worship album and what I'm finding is a 22 year old who says here's a song about my girlfriend, here's a song we sing in my church; they're on the same record. This is all of who I am. Do I want to cut who I am in pieces? I just love it; it's been life giving.

Tony: The modern worship movement is being criticised for being musically stylised. It got hold of the stadium rock/Brit pop sort of sound, the typical wall of guitars sound. To some degree, it's hammered it into the ground. Is that a fair criticism?

Andrew: It's an incredibly fair criticism. Coldplay stopped sounding like Coldplay in 2006 but, stylistically, Christian worship music has not stopped sounding like Coldplay in 2006. Sing new songs! There are a million ways to invite people in. It's my job now to find people who are making music that is different, unique and new and try to help shape that and mentor those artists and their careers. And share it with the Church. What a cool job!

Tony: But if you find something new and innovative in worship music, isn't there a danger you try to replicate that over and over again?

Andrew: I think that's the case with any industry. There's tension there and some of it's healthy. If I'm working with an artist who's 45 and got an established audience the parameters are different than if I'm working with an artist who's 21 and just bought a van and is going to drive around for the next six years and play a 120 shows a year. You're trying to help each artist be the most authentic versions of themselves and shed light on the truth of the Gospel in the way that feels appropriate through what's on the heart of that artist. How do you help them share that in a way that's vulnerable and truthful and that invites people in? That's going to be different with Paul Baloche than it is with some young kid. 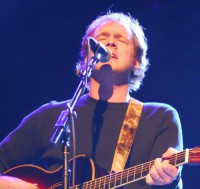 Tony: So, that's got you're A&R philosophy out of the way! Let's talk about what you referred to as your hobby, but it's much more than that of course, and that is your own personal music making. Presumably you've got a home studio and I don't know how you find the time to do it but somehow you manage it. You can't have much of a social life. You are intent on making your own music and you've put out a series of singles (which I've only just got so I can't make much comment on them) and these singles have led to a full-length album. Tell me about three or four songs on this album, what they're about and what styles you've recorded them in.