LCGC might be the British gospel choir that gets all the bookings (and the controversy) to sing backups on pop sessions, but for many pundits the ANGELICAL VOICE CHOIR are the fieriest, most gloriously uninhibited choir to be found on these fair shores. James Attlee spoke to the Angelical's director Simon Wallis. 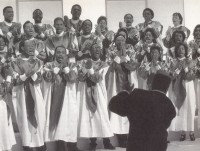 People Get Ready, Britain's only televised black gospel show, is only hours before recording the first programme in its second series. The show has burst out of the cultural backwaters of a Channel 4 Sunday morning to a prime-time ITV Sunday evening slot. Suddenly the funding has been made available to allow the show's producer Roy Francis to attract some top-class performers from the States. Although only three shows are being recording initially, the word is that there is a commitment to People Get Ready at a high level - after all, black gospel makes great television.

Cameramen practice their complicated ballet, gliding noiselessly across the floor. The grip executes a sweep that's finely calculated to get the maximum range of movement without decapitating members of the audience who will shortly be filing in.

Along one bank of seats are ranged the Angelical Voice Choir. A gospel choir is a remarkable thing, not least because of the almost palpable sense of camaraderie it gives off. There's much chatter, sharing of jokes and spontaneous outbursts of singing. Their brilliant purple robes for some reason make me think of tropical orchids blooming incongruously in the sterile environment of the TV studios. Yet despite their apparently relaxed and almost casual air they can transform in an instant into a single cohesive unit, singing and moving as one in response to the slightest gesture of their director. Prayer, perhaps fasting and certainly painstaking hours of practice have gone into the performance they are about to give.

Back in the early 1980's there were three choirs that were really making waves on the London Gospel scene - The Inspirational Choir, directed by John Francis; Bazil Meade's mould-breaking inter-denominational London Community Gospel Choir - and The Angelical Voice Choir, directed by the youthful and exuberant Simon Wallace.

'The Angelics' were always different. As disciplined as the rest there was always somehow more room for spontaneity in their performance. They put it down to what was always a priority with their director Simon Wallace - "the anointing." An Angelics concert was a full-blown pentecostal event - I remember seeing them perform at Riverside studios in London in a "Best of British Gospel" package in 1984 that was being videoed and recorded for a live album. So great was the anointing that night that one member of the choir disappeared off the back of the stage, "slain in the Spirit" (thankfully he appeared unharmed by the experience). That was the Angelics. I was not alone in thinking them the most exciting and dynamic of Britain's choirs. To me they seemed to have remained closest to their black church roots - perhaps that's why they were the only choir out of the "big three' to fail to get a record deal with a major company.

Seven years later, after some time off the road, Simon Wallace is married, older and (he claims) wiser, but equally passionate about what he sees as his ministry - directing and developing the Angelical Voice Choir. Like others in the British gospel scene, he has become impatient with the lack of opportunities open to gospel musicians in terms of recording and has taken things into his own hands.

"We've just recorded. I started my own record label, Dove Records, three months ago. It's the only way to get a record out without compromise. I've been approaching companies for years but at the end of the day they're only interested in selling lots of records... I believe gospel is a specialist music, I really do. It's exciting, it's anointed but it's specialised. A lot of people, especially in terms of British artists, never hear gospel music because it's not put on record. Bearing this in mind I decided to go ahead."

The first Angelical Voice Choir single, entitled "Together We'll Make It" is due out just as this issue goes to press, so watch for reviews next issue. The record should be available from independent record shops and the major chains in big cities via Travail, the gospel distributors.

Meanwhile the usual hunt for a mainstream distributor is on. Simon feels he hasn't had the support he could have had from at least one of the major Christian record labels in the UK.

"They really let me down. It's almost as if they have no vision. There's a lot of British gospel talent and I don't see them approach any of them to really work with them and get the best out of them. It's like they're not interested in doing that. I sent them a tape some years ago and I got absolutely no response - I found that upsetting because I looked on them as a gospel label."

A discussion ensued as to the reasons behind this. It's true that it's undoubtedly easier for a British label with the rights to a lot of American artists to simply ship in the product and sell it to the limited market they have, rather than put time and money into developing new artists and new markets in the UK. On the other hand it's also true that British gospel artists in the past have been legendary for their un-togetherness in a professional sense, turning up late for rehearsals, concerts, recording sessions and yes, TV shows with a disarmingly nonchalant attitude guaranteed to give record company execs ulcers. Some I have talked to are still licking their wounds, unwilling to spend money on what they see as a bad risk.

This is obviously a situation that can't be allowed to go on, as it means artistic death for British gospel. Happily there are many on the British gospel scene who agree. The production team for People Get Ready appeared pleasantly surprised when the entire Angelical Voice Choir appeared in good time for the start of rehearsals. "But Simon - you're early," one said weakly. Simon Wallace is out to demonstrate that anointing and professionalism are not mutually exclusive - he runs a very tight ship.

"I tell them straight that if they're in the choir, when we're performing they're coming. If they don't turn up I suspend them for three months. It sounds harsh, but when an organisation like a TV company expect 33 people they need to get 33 people. The choir turn round and respect me for it, because it's professional."

Taking care of business is just one aspect of a choir director's role. The most important thing of all is what happens up there in front of the people when they open their mouths.
I've spent time on this choir, I really have. I've spent time teaching them to sing. Sometimes we don't have any musicians at rehearsals, we just spend time on the vocals. You have to teach them to sing with resonance, so that when they come down soft there's a layer of air above the natural voice so you get that smooth effect... There's a lot of different tricks you can play with the human voice that give you such a pretty sound."

Simon was only 19 when he formed the choir and would be the first to admit that he was also inexperienced.

"We've come a long way since then - I was very immature when I started. I had a vision and I wanted to bring it about, but it's how to do it - I did it the best way I knew how at that time, but I'm a much wiser person now, musically as well."

He sees a major part of his role as recognising the potential in a voice and developing it to it's fullest extent.
"You can listen to somebody's tone and when they've got a pleasant tone but they don't know what to do with it you can work with it. I get many people who join who really can't sing, but they've got a beautiful tone. Within months the transformation is amazing. The lady I'm using today" (soloist Melanie Miller) "when she came she had a pretty tone but with a lot of work she now sounds like a professional."

There came a time with the original Angelical Voice Choir when Simon felt that all his hard work had really been for nothing. The vision had been lost, the choir's unity undermined and the anointing had departed. So did a lot of members, which Simon claimed was "a blessing in disguise." There followed a building up period with the benefit of experience, this time on a more solid foundation. As before, Simon saw "that special anointing" as of prime importance.

"I really wanted the people we had to be chosen by God, and I really feel that they are - their whole approach to it is different. It's when you have the anointing that you're effective. The Bible says that it's the anointing that breaks the yoke - there's a lot of yokes in people's lives. Many people are bound by drugs or bound by depression or by a spirit of fear or whatever. Of course the financial world is in a bad state and many people are in financial difficulties - it's all yokes that have to be broken. The devil will bind you in all sorts of ways just to take your mind off Jesus Christ. The Word says that the only way we're going to be kept in perfect peace is if our minds are stayed on Him, so obviously the enemy is trying all kinds of things to take your mind off Jesus and onto your finances or your fears or whatever. So to me it was essential, it was so important, it was VITAL that the choir had this special anointing and I prayed about that and the choir prayed about it. That's how we started off and along the way people started to look to different aims and I had to shuffle it around and build again. As a result we all are one now, we have the same vision... and we have an anointing, oh I know it! Because when we've sung people have written and said that the doctor had given them two months to live with a heart condition - but that after sitting under the ministry of the Angelics they went back to the doctor and they'd been healed. That's because we sing under the anointing. The Bible says that nothing should be done to strive for vain-glory but in lowliness of mind. We really do it in lowliness of mind, because in ourselves we can do nothing. But when God gives you the anointing you can do anything. Amen - it's beautiful."

That night beneath the lights with the cameras rolling young Melanie Miller steps up to the mike to sing her song. The first two takes are, well, ordinary. The girl has a pleasant tone, but her performance is nervous, stiff. But on the third take she is suddenly completely different. She moves expressively, her voice has authority and the song builds to a climax of almost unbearable intensity, leaving the singer weeping with her eyes closed as the crowd go wild and the cameras rush to capture the photogenic glisten of tears as they roll down her cheeks. "It's the anointing," someone says. Who'd disagree?