R&B gospel? Latin-pop fusion? Whatever you call their music, one this is sure. ANGELO AND VERONICA are making serious waves as Tony Cummings reports. 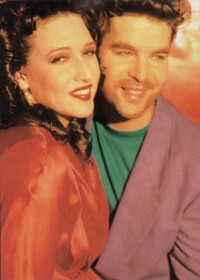 What's wrong with this picture? The church is full. Black men and women with their children are dressed up and waiting for the programme to start. They have come to honour the Lord in his house and are not casual about it; neither in their manner nor their dress. They are there to receive the Spirit of their Lord and Saviour, Jesus Christ. These worshipers are prepared to respond with shouts of joy and cries of praise, their bodies trembling like leaves caught in a strong wind when "moved". They take to heart the expression, "If you got it, you ought to show some sign!" They should at this black church. The penitents anticipate the singers. Their "good-news" songs will lift the listeners from their seats - and they do. Their ecstatic "Amens" and "Thank you, Lord's" abound. The instigators of this outpouring of appreciation is a husband and wife duo. Angelo and Veronica. He is a singer and guitarist; she is the lyricist for the duo and a vocalist. He's Italian. She's Latino.

What's wrong with this picture? Nothing if you're Angelo and Veronica Petrucci, two of the hottest singers in gospel music. Everything is right. Their gospel style has assisted them in building a huge audience among black listeners while their white CCM following is equally large. The husband and wife duo's Benson albums 'Higher Ground', 'Angelo And Veronica' and 'Give Your Life' have received mucho US airplay and with CCM artists now breaking regularly into the US pop album charts it seems quite possible that this soulful-voiced team with a slick line in urban grooves and towering inspirational ballads with soon be there in the Hot 200. It's certainly a long and intriguing showbiz journey since Angelo Petrucci first espied the young Veronica doing a solo during a choir appearance at Boston's Berklee in 1990.

Angelo grew up the son of a musician in Boston. At age 13, he began performing and his life quickly became music-driven. His Catholic parents encouraged him in the rituals of their faith, which he wrote off. "You go to church on Sunday just to please your mother," Angelo thought. "You don't go there to experience the power of God or even to know God. He's really this inanimate object you can't touch, you can't see, you don't hear." Along the way though. Angelo's parents' religion became much more and they were born again and Spirit-filled. In such a close-knit family (Angelo lived at home until he was 33), such a change was bound to make a ripple, but by then the 25-year-old seasoned nightclub musician avoided spiritual matters altogether. He had stopped attending church in his teens - "I was too big, too grown up. I knew everything" - and just lived for his music.

Angelo somehow avoided drugs and alcohol - he was unimpressed by the "slobbering" clientele at the clubs - but did mix in some damaging relationships. "I was on a course of destruction," admits Angelo. "It was meaningless."

Angelo's mum made a wise move one day by bringing home a tape by R&B gospel team Commissioned. It was Angelo's first brush with Christian music and he was blown away. Pondering the goose bumps the music inspired, he couldn't identify or ignore the power behind the music. Later, when his mum and dad invited him to play bass at a Bible study service they were attending, he accepted. "I didn't know what this was about: all these people lifting their hands, speaking in tongues, laying on hands and (being) slain in the Spirit. I wasn't offended (because) I trusted my mother and father. If they were there, there had to be a reason."

During the praise and worship segment of the service, Angelo played bass as requested. "The songs weren't difficult," Angelo says. "It was perfect because I wasn't thinking about (playing) the music." For the first time, "I was experiencing the aroma of God. His presence was the focal point."

Angelo sensed a "call" but didn't respond for some months. He continued attending the Bible study; meanwhile, against his protests, his mother planted the Gospel of John in his glove compartment. Then one day, "I drove to work, everything was fine and I had this extremely powerful urge to move the car over, open the glove compartment and read the book of John. I opened the little book and started reading. And I started weeping. I wasn't depressed; I wasn't unhappy; it was the Holy Spirit.

"I couldn't wait to get to work to call my mother. She started praising the Lord. She said, 'You've had an experience with God. You've had a touch of the Holy Spirit. You've experienced his presence, his power, his might.' I was like, wow! Glory! I went home and gave my life to the Lord. My life has never been the same."

Veronica also grew up in a Catholic home that the Spirit invaded. Her mother accepted Christ and led Veronica to the Lord when she was six. From there, though, things were anything but smooth. "I'm best friends with my mother," Veronica says, "but things with my father were so strange. He just didn't know how to show love. I had a lot of insecurities and very low self-esteem - to the point that I felt like, 'There is no purpose for me. There is no plan for my life. I might as well not even be here.' From the time I was nine years old I was plagued with thoughts of suicide." At 17, Veronica left to study music in Boston (ironically the same school Angelo attended earlier -Berklee College of Music), thinking she was leaving her problems behind. In college, though, the same thoughts returned. Depression dogged her.

Then Veronica joined her school's gospel choir. "I'd grown up with Latin music, top-40 music. When I heard this, I just could not believe it. It seemed so familiar but so new and different. It made me feel so good."

Someone encouraged her attraction to gospel music with an album by Yolanda Adams, 'Just As I Am'. "A couple of songs really stuck in my mind, one called 'Restore Me' and one called 'Wash Me'. I knew just from this music that I had to make a choice. I knew that I wanted God. I knew that I needed him."

Other gospel artists like the Clark Sisters, Vanessa Bell Armstrong and Tramaine Hawkins sang hope and truth to Veronica and she knew "there was a call" on her life.

Soon after, "Things were going terribly. I had no money to keep going to school. I was waitressing, but the (restaurant) closed down. I had no way to pay my rent or go to school the next semester. I just couldn't handle it. I totally surrendered my will to the Lord. I gave my life to him. (And) my whole world got turned upside-down." For one thing, she had a dream. "God spoke to me," Veronica says. "He just said in my ear, 'Veronica, you have got to forgive.'" She knew whom he meant.

"That was a real turning point," she says. "God enabled me. Only he can heal those wounds. I call it a miracle because one day, I just forgave. I was like, 'Wow, I really love my father.' Tears would come to my eyes - it was overwhelming, the love and compassion that I had for him. You know, God will do that: he will take all that anger and turn it into love and compassion."

I fell in love with their video "You Knew Me When" back in the 80s. It was such an upbeat song of praise. I'm so glad to know they're still around.