Even with the ongoing music industry downturn, America continues to provide Christendom with a series of excellent new acts. One which has just made it to the Cross Rhythms playlist with their infectious "Circles" is Nashville-based pop team Anthem Lights. The origins of the Anthem Lights are a little convoluted. Vocalist Chad Graham and singer/songwriter Alan Powell were living in Los Angeles, writing and working with a producer on Chad's solo five-song EP. Near to its completion they started praying about the project becoming a group with multiple vocalists. Anthem Lights' Caleb Grimm takes up the story. "They called their contacts at Liberty University where Kyle [Kupecky] and I were attending school and traveling with a music group. Luckily, the contacts/friends at Liberty recommended us to Chad and so a few days later Chad and his producer flew out to Virginia to meet with us. Things really clicked between the three of us and a few weeks later we formed Yellow Cavalier. Alan had been writing and working creatively on the project, but about a month later he stepped in and joined the band. That is how we became Yellow Cavalier."

The 'Yellow Cavalier' EP was released independently in May 2009. The group gigged for more than a year before deciding that a new name was needed. Alan Powell spoke about the name change to JesusFreakHideout. "We wanted something that had some meaning but also hinted at the sound of the music. Yellow Cavalier did neither and we felt like Anthem Lights did both. We look at the name as signifying our goal to, in some ways, be the 'anthem' or 'cry' of the believer, whom Christ calls the 'light of the world'."

Months after the name change Anthem Lights signed with Reunion Records. On 1st February 2011 Reunion released the 'Anthem Lights' EP and the song "Can't Shut Up" made it to 42 on Billboard's Christian Songs chart. Alan Powell spoke to JesusFreakHideout about the song. "'Can't Shut Up' is based on the passage in the Bible where Christ heals the two blind men and asks them not to tell anyone what he had done for them. However, they are so overwhelmed by the amazing power of Christ in their lives that they went and spread the news about him everywhere. This song, in the same way, is about being so amazed at what Christ has done for us that we can't help but tell everyone as well."

After the Christian radio success of their Reunion EP, a full length self-titled album was released on 10th May. One of the album's standout songs is "Where The Light Is". Said Alan, "'Where The Light Is' is by far the most personal song on the record. It is my story, plain and simple. I was very close to walking away from everything that mattered in my life, my faith, my family. . .everything. God spared me that painful reality and this song is based on one of the truths I learned through that experience, namely that no matter how dark it gets, as long as there is even a glimmer of light, darkness doesn't stand a chance. I truly hold that God wrote that song. Nearly every lyric and melody and even chord used in this song is the same one played the very first time it was sung or uttered. Very little rewriting or reworking went into it, which to me was just a sign that God was doing something special." 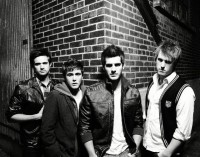 Alan spoke to 5foldmedia.com about the future direction of the Anthem Lights ministry. "For us, right now for what we do in our ministry, we have two passions. They seem a little generic but we know beyond a shadow of a doubt this is what God has placed on our heart right now. First of all, to the non-believer, that there is meaning, that there is purpose in this life. It really, really saddens us when we see people wake up and they chase things - like money, careers, power, relationships, whatever it is - they think that they're doing well and go back to sleep. Wake up the next morning. Do it again. Days turn into weeks, weeks to months, years to decades. Before you know it, they've wasted their whole lives. And there was something that was waiting for them the whole time. And then, to the believer, because we've all grown up in the church - all of us - us three right here are pastor's kids, his dad (pointing to Chad) is chairman of the deacons. I mean, if the doors were open at our church, we were there. Personally, I got saved at six years old; I know that was my moment of salvation. But also at 17, I remember there was a moment where I realized that the faith that I was living was kind of my father's faith. It was a faith that I just kind of. . .went through in life. I could give you all the answers, quote Bible verses, and all of that kind of stuff. But it never became real to me.

"So, our passion to the believer is that this faith that we have is not a ticket into Heaven. It's not your father's faith. If it's not completely engulfing you, and in every decision that you make it has an effect, then it's not a genuine faith. We want to tell the believers, we want to tell the Church that this is not a Sunday morning, Wednesday night - whatever it is - faith. This is a faith that takes over every aspect of your life. Because, to us, we've kind of lived both sides of it, and we've certainly seen both sides of it where we've been at church with our friends who are there lifting their hands in praise and worship and then we go to school with them the next day and nobody even knows that they're a Christian. It's kind of that. . .it's the rich young ruler where he comes up to Jesus and says, 'Man, I'm going to follow you. What is it going to cost?' Jesus doesn't always call us all to give everything away, but he knew for the rich young ruler, that was the thing that was holding him back. And Jesus said, 'I want you to sell everything that you have.' Because you know that this faith costs us everything.

"I think that that is our passion right now. To the non-believer, that there is meaning and there is purpose. To the believer, this is supposed to be everything to us. So, we'll let it evolve and grow into something else specific, whether it be compassion or, you know, Food For The Hungry, which is sponsoring this tour. I'm sure that it will once we get to that point and have those conversations. But for us right now, it's a very simple, simple calling: To the non-believer, there is Jesus; to the believer, this is supposed to be everything. That's kind of what gets us going, what gets us on stage, and keeps us back on the bus going to the next city."

I totally agree with everything that was said. Personally, I am a believer, and not that I wasn't close to God before, but it seems like, after I started listening to Anthem Lights, I became even closer. I LOVE Anthem Lights!!! They are most certainly my favorite music group/ band, and I am certain that they always will be!!! I hope that more people would come across Anthem Lights and have the same experience listening to their music as I do every single day!!! I love you guys!:)