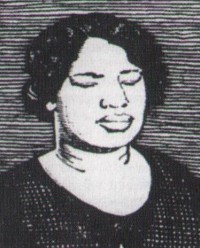 African American church history is littered with musicians who made giant contributions to the evolvement of contemporary Christian music but whose work is unknown to supposed keepers of Christian music history like the Gospel Music Hall Of Fame, let alone the average CCM album buyer. Yet the work of blind sanctified pianist and singer Arizona Dranes, who flourished briefly in the 1920s, has not been completely forgotten. The CD 'Arizona Dranes: Complete Recorded Works In Chronological Order (1926-1929)' has been in the Document Records catalogue since 1993 while learned ethnomusicologists now acknowledge that Arizona's pounding, two-fisted piano was the missing link demonstrating that much of the syncopated rolling beat of boogie piano evolved as much in the 19th century holiness churches as ever it did in the whorehouses of New Orleans.

Arizona Juanita Dranes was born in Dallas, probably between 1904 and 1906, and is thought to have been of black and Mexican lineage. She was blind from birth and learned the piano in her early teens, playing for church meetings in the vicinity of Dallas/Fort Worth, where her abilities made her a favourite with the local Church Of God In Christ. Reverend Samuel Crouch of Fort Worth recommended her to the Okeh Phonograph Corporation and after Okeh sent their talent scout, Richard M Jones, to Texas in early 1926 to audition her, she was invited to Chicago for a recording session. Many of her recordings featured Texas barrelhouse piano style straight from the holiness churches while her shrill vocals added to the effect.

At her second Okeh session in November 1926 Dranes was accompanied by the famed Rev FW McGee and his Jubilee Singers. More recordings followed. By 1930 her recording career was over. She still corresponded with Okeh for a short while, but never recorded again. It would seem she returned to the network of sanctified churches where a number of later gospel celebrities recalled her impact. Alex Bradford remembered her performing in Bessemer, Alabama at the America Back To God Day presented at the local white ball park, Legion Field: "And there was Arizona Dranes, the blind sanctified lady. She'd sing Thy Servant's Prayer' and crackers and niggers be shouting everywhere." Rosetta Tharpe heard her sing "The Storm Is Passing Over" in St Louis and in The Gospel Sound writer Anthony Heilbut mentions her "impeccable, almost affected" diction and her huge influence on younger singers like Madame Ernestine B Washington and Goldia Haynes.

Ray Funk, in the liner notes to Columbia Legacy CK 46779, mentions a last intriguing item: an August 1947 advertisement for a gospel concert with "an all star programme, the greatest ever presented in Cleveland" including "Nat'l known Blind Pianist Arizona Dranes" from "Chicago, III." Sadly, Arizona's passing was not acknowledged by any publication or historian. She died in complete obscurity, remembered only to the Lord she had served so faithfully.